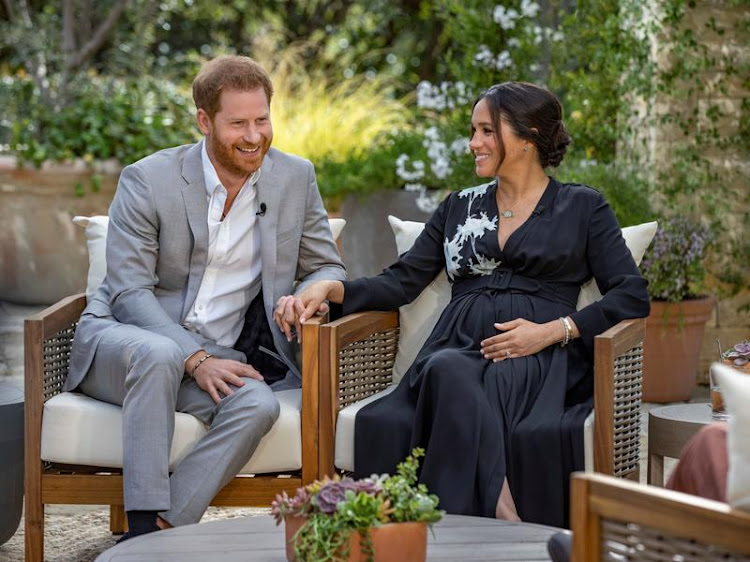 Britain’s Prince Harry and Meghan, Duchess of Sussex, are interviewed by Oprah Winfrey in this undated handout photo
Image: REUTERS

The much-anticipated interview between Oprah and the Duke and Duchess of Sussex was every bit as revealing and shocking as advertised. The couple sat down with the queen of talk shows last Sunday to tell their side of the story and the reason they chose to leave Britain and royal life.

The two-hour interview was a cornucopia of never-before-heard stories of the couple’s personal struggles as well as institutionalised problems within the monarchy.

The two most prominent issues that arose from the interview were Meghan’s mental health issues, where she at one point contemplated suicide, and the racism she faced in the royal family and British tabloids. However, one issue shocked everyone to the core, including Oprah, whose jaw just dropped to the floor. According to the Sussexes, they were informed that their son would not be given the title of prince because they were unsure of how dark his skin would be!

There was quite an uproar at the exposé of racism within the British Royal family as well as the ill treatment of the couple by the family within the monarchy, which Meghan referred to as ‘the institution’. Whenever she said “the institution or the firm”, it gave the same weird vibe as when someone who was in a cult would refer to it as “the church”.

When to cut off toxic family

As expected, people took to social media to share their opinions on the interview. The interview was received with mixed reviews as not everyone sympathised with the couple. While the Internet argued over who’s right and so on, I focused solely on the powers of monarchies around the world and the lengths they go to when they need to cover up stories.

There are currently 44 monarchies in the world, two of which are in Africa: the Kingdom of Eswatini and the Kingdom of Lesotho. These monarchies have a variety of powers; some are absolute monarchies, some are constitutional monarchies and some are purely ceremonial roles. Regardless of how much power monarchs hold, we can debate that they retain enough power to hide serious offences or get away with crime.

Perhaps the most notorious royal today is Mohamed bin Salman (colloquially MBS), crown prince of Saudi Arabia. Ever since his appointment in 2017, he has made sure to let everyone know the full extent of his power. Right after his appointment, he ordered a corruption crackdown, which subsequently led to the arrest of 200 princes and wealthy Saudis, including Prince Al-Waleed bin Talal, one of the wealthiest men in the world.

MBS has been accused of unlawful detentions and tortures of human rights activists. He is said to be behind the Qatari diplomatic crisis, war in Yemen as well as the savage assassination of journalist Jamal Khashoggi. As part of only four absolute monarchies in the world, nothing can be done to prevent MBS from taking the law into his own hands.

Another Middle Eastern royal who has been accused of several misconducts is Sheikh Mohammed bin Rashid Al Maktoum, ruler of the Emirate of Dubai. In April 2019, Maktoum’s second wife fled to the United Kingdom. She sought court protection, claiming Maktoum decided to marry off their teenage daughter to the Saudi Crown Prince. In 2018, Maktoum’s own daughter Sheikha Latifa released a YouTube video, making strong allegations against her father. She claimed he was behind the disappearances of many royal family members, including that of her sister Sheikha Shamsa. Latifa and Shamsa have not been seen or heard from since.

Back in Great Britain, Prince Andrew, the Queen’s third child, was implicated in the Jeffery Epstein sex trafficking scandal. The American authorities named Andrew as a person of interest in the case as one of the victims, a minor at the time, claimed to have been intimate with him. Prince Andrew was suspended from public duties after the allegations. However, Andrew is still pretty much a member of the royal family, with all his titles and ranks remaining intact.

These are just some of the examples of the kind of misconducts monarchies are getting away with. They have the power to hide their transgressions from the public. People have fought to end tyranny and absolutism for democracy and a voice to elect as well as remove leaders from power. Monarchies are nothing but a patriarchal Stone Age tradition of systemic oppression by one great family. Perhaps it is time to do away with them.

Attack on US Capitol a reminder that democracies are experiments