Farewell to The Hilton and my Milton memories 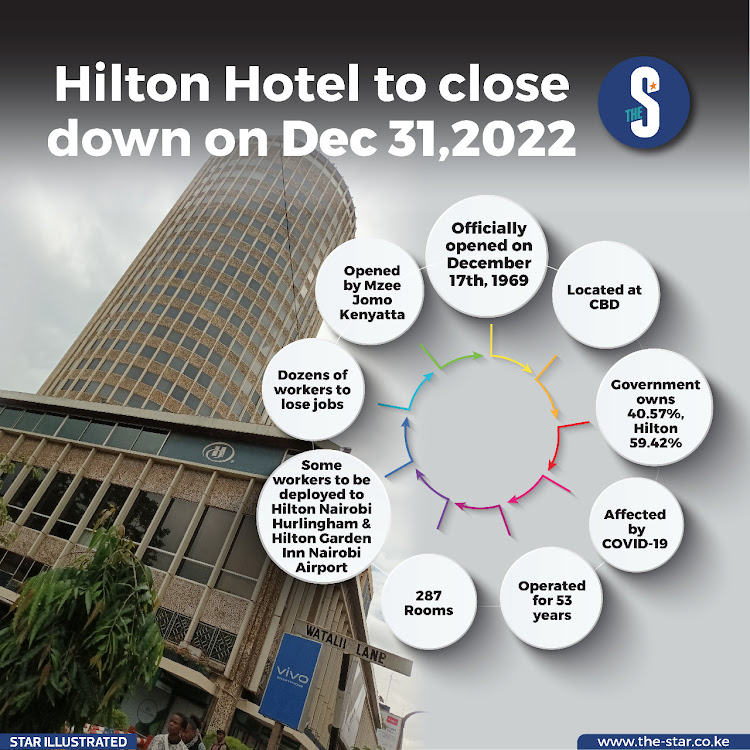 Facts about Hilton hotel as its close down loom
Image: WILLIAM WANYOIKE

At the heart of the Central Business District of Nairobi stands a 61m tall building. It is known far and wide as The Hilton Hotel. It stands tall and majestic as an icon of Nairobi next to the statue of Dedan Kimathi erected by the newly late President Mwai Kibaki.

Sadly, news in town is that this hotel, which opened its doors in 1969, at the height of the heady years of Independence, will shut its doors forever come the last day at the end of this year. It will be the end of an era right here in Nairobi.

A bench exists on the concrete square right in front of this famous hotel. It is U-shaped and many on the streets of Nairobi call it: Bench of Thoughts. Here, daily to be found, is a half-circle of Kenyans seated for various reasons and wallowing in varied thoughts.

It is not uncommon to find an acrobat or two performing all sorts of impossible moves before this bench. Often, the spectators will be seated on this unique bench and staring in deep boredom at this spectacular display of raw talents.

Most who occupy the space of this bench before this famous towering hotel are people with appointments in the city. Some have appointments for job interviews. Others have appointments to meet the love of their lives for the first time face-to-face after months or weeks of social media romance.

There is an odd one or two lawbreakers who occupy the bench, too. Most of their ilk are without anything in particular to do in the city. They arrive at the heart of the city torn between two things: What to do and having nothing to do. They resort to petty crime that mostly takes the form of pickpocketing or conmanship.

There was a time when an occasional ganja peddler could sit here. He almost always reminded me of Bob Marley or even Dedan Kimathi. The man had a good lock of rastas on his head. His eyes looked lost and sad in that familiar way that most children raised by these streets look.

We became friends by default. My first visit to the heart of the city was 24 years ago. I was a newcomer to Nairobi and had been admitted to a university here to be made a teacher. I got lost in Nairobi as I tried to reach the Anniversary Towers on University Way. I wanted to apply for a Helb loan.

After meandering up and down the streets of lower Nairobi, I finally saw The Hilton and headed for it. I was coinless, save for the fare I had tucked safely into the smallest pocket of my Gikomba jeans. Tired and dusty-shoed, I sat on the Bench of Thoughts after reaching The Hilton.

I sat next to Ras Fulani as he observed me keenly. He asked if I was new in town. I said yes after a fist-bump and bumped my fist on my heart. He asked if I was a Rasta. I said I am but without locks. Where from? I said from Bungoma.

We exchanged pleasantries about how Babylon (the upper class) and government was oppressing youths who graduate these days. The idleness that followed university graduation was on another level back then. We shared a cigarette. It was not illegal to do so publicly in Nairobi back then.

He took his walking stick as I raised my left eyebrow and opted to take me to Anniversary Towers. Enroute, Ras Fulani informed me about the dangers and profits of peddling ganja in Nairobi CBD. He knew most cops of streets that we criss-crossed. Everyone seemed to be his friend.

Ras became a major cognate of the machinery of my Nairobi life as a youth. When I last saw him, he had contracted HIV-Aids and was leaving the city. We walked to the Bench of Thought for a last rendezvous.

With great difficulty from pain of boils on his loins, he sat at his old spot, where today new strangers sit. I stood holding his smooth walking stick as he swallowed his medication with my Dasani water.

Later hobbling, I escorted him to Machakos Country Bus. It came as no surprise to me that the bus he took as he lived the last of his days in Nairobi, was heading to Bungoma. Don’t ask me why.

As the bus revved, starting its journey, with me chewing on 20 bob sugarcane in a colourless plastic bag, Ras Fulani left a note scribbled on a torn match box in my palm through the open window, and told me, “Look for me one day when you are in the West.”

As I walked back to the spot where we met, as I saw the towering frame of The Hilton this week, as I sat now on the Bench of Thoughts, staring at the statue of Tom Mboya, as I veered my sight to the old Kenya National Archives, where stored are the memories of Kenya, I felt the May wind blow off my hat, my heart missed Makokha. Perhaps the same way Kenyans will miss The Hilton one day, here at the heart of Nairobi.