In defence of Hilary Ng’weno after he was branded sellout

Article in local daily accused him of being a Moi apologist, but truth is he was principled to the end

• Hilary Ng’weno was dismayed when multipartyism degenerated into ethnic entities

• However, as other media became partisan, he retained sobriety at Weekly Review 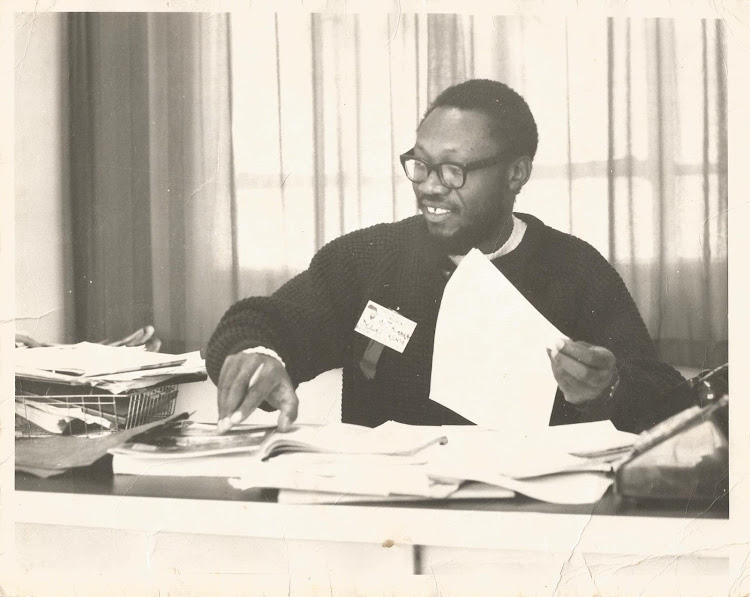 A curious piece, was John Kamau’s story about Hilary Ng’weno in one of the newspapers Sunday last week. Kamau seemed at pains to paint Ng’weno, the most lauded, outstanding and principled journalist Kenya has ever produced, as a latter-day villain and a sellout to some cause Kamau evidently espouses.

Kamau laid out the colour of his stall early, in his opening remarks, calling Ng’weno a “[President Daniel arap] Moi apologist” and describing The Weekly Review (WR) in its final days as “just like any other rag in the media market”. I suspect those who were working at the magazine then, led by the estimable Jaindi Kisero as managing editor, would beg to differ, but Kamau’s evaluation is doubtless coloured by the same brush with which he painted the rest of his picture.

Kamau showed his fundamental misunderstanding of Hilary Ng’weno and WR when he wrote that “In 1981 … the government decided to place all its tender adverts in The Weekly Review, and this also came with a price. The paper started to tone down its attack on the Nyayo regime.”

Ng’weno had never attacked the Nyayo regime at any time since the magazine began. The use of the word ‘attack’ indicates a misconception of what WR was. The magazine did not campaign. It analysed facts and events as it saw them, and then published that analysis without, as they say, fear or favour. If this analysis proved adverse to any individual or organisation, it was doubtless viewed by them as an attack. But that was their perception, not an empirical judgement based on observation and data, which were WR guiding stars.

Secondly, newspapers are not dream-works operating in some kind of utopia. They are heavily reliant on corporate advertising, without which they cannot exist. Today, the advertising opportunities provided by digital platforms, combined at this time with the Covid pandemic, are among the reasons all newspapers are struggling.

For WR in the 1970s, cancellation of advertising contracts was government revenge. WR was too objective and insufficiently sycophantic, so it received no government ads and very little corporate advertising for more than six years. As a cash-starved new business, survival required a miracle of juggling. Ng’weno took out crippling loans that he invested in multiple publications, a commercial printing plant, a film studio and, in the early 1990s, an attempt to build a company HQ on an arid plot just off the Mombasa road.

It should be no surprise that he was keen to improve this financial situation, or that after many efforts, he was finally successful in negotiating a fair share of government advertising. (This did not prevent financial reasons forcing him to sell The Nairobi Times in 1983.) The insinuation that he took money from Moi in exchange for sycophancy is invidious and wrong. 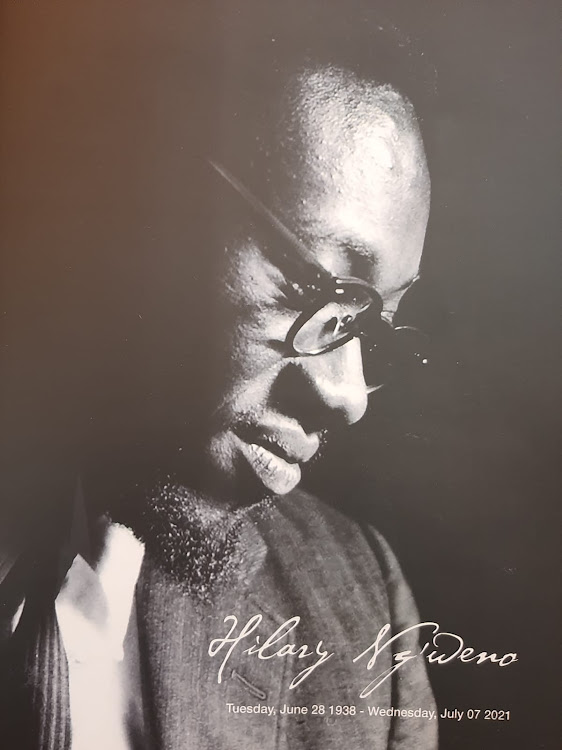 Image of Hilary Ng'weno in the Order of Service booklet used during his memorial on Thursday
Image: COURTESY

Ng’weno was a disciplined, almost ascetic, person. He had no interest in fast cars, houses, land, foreign bank accounts or travel, fancy clothes or material goods of any kind. He and his wife Fleur for many years drove rather battered old cars long after others of the same models were in the breaker’s yard. And Hilary and Fleur lived their entire married life in a modest flat in Nairobi’s Upper Hill area.

Ng’weno’s single objective in life was not personal enrichment but bringing enrichment and enlightenment to his compatriots’ lives, whether through publishing or through film and TV. He saw it as his contribution to the nation — demonstrable in the later triumph of his TV series The Making of a Nation, an invaluable and unmatched visual chronicle of Kenya’s history.

But let’s face some reality about newspapers. The motives and agendas of newspaper owners shape their publications, as they try to influence how people think and how they vote. This is as visible in Kenya’s newspapers as it is in, for example, those of the US or the UK. Ng’weno owned 90 per cent of WR until 1992 and 100 per cent thereafter. He was entitled to do with the publication as he wished, just like other media owners. He did not have some kind of special obligation to stand apart and represent, at his own cost, radical support for some factions of his readers’ choosing. It was always his choice to make, and that choice — respectable, ethical, honest journalism — never changed.

Choices became stark in 1992. Opposition politics came to town and the media splintered into partisan groups. WR was no longer needed to hold anyone to account — there was now a vocal opposition to do that — and readers’ interest in the magazine fell away as the public excitedly involved themselves in the multi-party era, unprecedented in most of their lifetimes. The shriller, more animated, possibly more hysterical, voices of some other publications — the likes of Kenneth Matiba’s People Weekly and Njehu Gatabaki’s Finance (both of which, like WR, were to suffer in the recessionary climate ahead, eventually closing down) captured people’s fevered imaginations more than the sobriety of WR could.

Can any of us look frankly at Kenya then or now and honestly say either Ng’weno or Moi was wrong? The entire conversation about elections to this day boils down to ethnic equation

Ng’weno always took a dim view of the negative aspects of tribalism and had championed a national outlook. Now the prospect of competitive elections in Kenya was producing strong ethnic attachments and heightened ethnic polarisation. Ng’weno was dismayed when the nascent opposition quickly fractured along ethnic lines. He saw this as unprincipled politics, motivated by narrow calculations of ethnic elites hankering to ascend to power, and he didn’t find anything there to support. Moi himself had previously voiced the view that multi-partyism would lead to a retreat into tribal groupings, and that is what appeared to be happening.

In fact, can any of us look frankly at Kenya then or now and honestly say either Ng’weno or Moi was wrong? The entire conversation about elections to this day boils down to ethnic equations — much as candidates might try to fight the uphill battle of engaging the electorate with policies.

And if Ng’weno saw Moi as the better option for the country, that was his prerogative, just as every other publication quickly fell in line behind favoured candidates. Ng’weno should not be judged by standards different from those for everyone else.

In fact, Kamau in his article was repeatedly guilty of judging Ng’weno by standards he might not be ready to apply elsewhere. If Ng’weno was an apologist, were others associated with Moi apologists, too? In particular, would Kamau call Uhuru Kenyatta an apologist?

Kamau voiced several fairly random ‘accusations’, including that Ng’weno had no time for the pan-Africanist Kwame Nkrumah or for the Organisation of African Unity (now called the African Union), which he had dismissed as “inefficient, understaffed, underfunded, directionless and completely impotent as far as major decisions are concerned”. Well, let us hear from anyone who has the evidence to argue otherwise. The OAU spent most of its life riven with disputes and acting as a talk-shop, only too anxious to protect co-tyrants among African leaders.

When it comes to Nkrumah, the Ghanaian leader lauded for his vision of a united Africa at a time (1940s and 50s) when unity of purpose for Africans was particularly important, Ng’weno’s view might be considered iconoclasm that was justified. Nkrumah’s vision included himself as leader of this (now) 1.2 billion-strong continent, and he neglected Ghana’s economic development and squandered national funds to pursue his ambition. He dictatorially banned opposition parties, compromised courts, jailed opponents, enacted oppressive laws and gagged the press. He declared himself President for life in 1964, before being ousted from power in 1966 and fleeing to neighbouring Guinea, where his friend President Ahmed Sekou Toure gave him the title of honorary co-President. Despite Nkrumah’s auspicious start, it is hardly a wonder that he was no hero to Ng’weno.

Nor, contrary to Kamau’s assertion, did Ng’weno “call for” armed insurrection in Africa. Observing that it might take an armed uprising to free Zimbabweans and others, and that in the climate of the time rebels might be forced to look East for arms, is political analysis and comment, not incitement.

Kamau made a number of other errors. Ng’weno graduated in physics, not nuclear physics. His novel The Men from Pretoria was published in 1975, not 1976. Peter Kareithi was never business editor of WR. Ng’weno did not influence the High Court, as Kamau seemed to suggest, regarding Financial Review, the publication Kareithi bought from Ng’weno. The fact is that there was a formally drawn-up non-compete agreement between the two of them at the time of sale, in line with agreements commonplace in mergers and acquisition deals. This was violated by FR, hence the court case. We are talking about the rule of law here. That the government banned FR some time later because of its content was nothing to do with Ng’weno.

Kamau seemed to have an agenda to make it all about Ng’weno, though. But there we are — false narratives play a role in every arena. And Hilary Ng’weno was the one far-sighted fellow who dedicated his life to trying to correct that.

Philip Ochieng was a great editor but a lousy pickpocket
by Sarah Elderkin
Big Read
19 July 2021 - 05:00