They get cut for you and it ruins their lives: FGM wake-up call to men

• Male activists are fighting the cut by talking to elders, whose silence breeds continuity

On a sunny day, 10 Samburu elders sit under tree shades on a dried-up riverbed in Sasaab village, Samburu East.

Some are sitting on stones while others rest on a traditional men's chair known as ekicholong.

While some are listening keenly, others, their interest aroused by topics that are rarely discussed in public, interject to air questions and opinions.

One such topic is female genital mutilation. FGM is a harmful practice involving the full or partial removal or injury to a girl’s external genitals, supposedly to tame their libido so they can be faithful wives.

Depending on the type performed and how it is carried out, effects range from trauma, infection and potentially fatal bleeding in the short term, to painful sex and childbirth complications in the long term.

The speaker, Francis Lemoile, young enough to be their son, has to keep pausing to engage the opinions of each attendee to project a demeanour that will make him address the elders throughout the discussion.

“You know these are elders and traditionally, it's they who are supposed to advise me and not vice versa. So you have to be very cautious and project respect to win their audience,” Lemoile says.

While the key discussion is centred on FGM, the three-day session has to include other more acceptable topics to lessen the tension of having to talk about the violation with the elders.

“Today we started with discussing the coronavirus, then we will talk about HIV-Aids before we delve into FGM matters. It’s a strategic approach to drive the message home since FGM is not anything you want to talk about without any plan, especially if you are against it,” Lemoile says.

Born in Samburu, he grew up witnessing the mutilation being practised and its effects, and he decided to fight for its elimination as a way of giving back to the community.

In March, President Uhuru Kenyatta presided over the landmark declaration by Samburu elders to end FGM and child marriage in the community at Kisima in Samburu county.

“My commitment to eliminate FGM in Kenya by 2022 will be achieved if each one of us takes their own initiative. The journey we have started today will require each one of us to play their part,” he said, adding that, "I know it is possible for our girls to go through alternative rites of passage without suffering.”

According to Unicef, nine out of 10 people in Kenya think FGM should stop, with girls and women between 15-49 years leading by 92 per cent, while boys and men in the same age bracket lag behind by 89 per cent in the opinion. 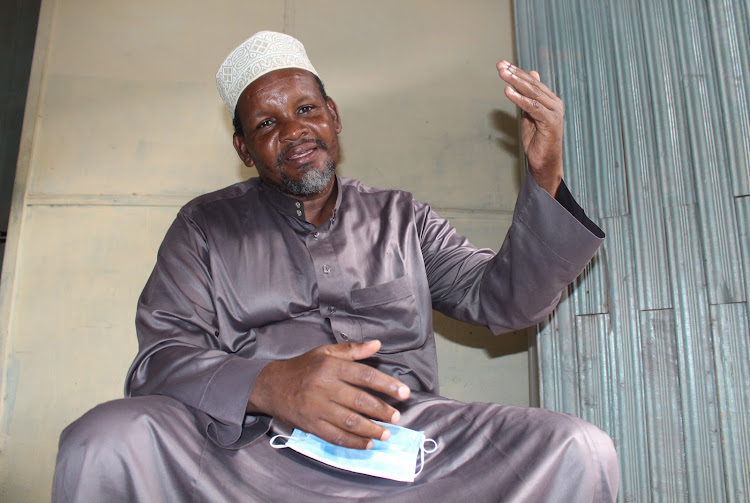 In many communities, men are custodians of culture and heads of families.

While the cut is conducted by women, it’s the men who bless the occasion as with other ceremonies.

“Even if it affects the women, they are waiting for men to speak on the matter,” says Lemoile, who serves as national treasurer of the Youth and Anti-FGM Network.

It’s a network that brings together youths from 22 FGM hotspot counties.

He says the challenge of helping the elders to change their hearts has been wrong approaches and lack of men to lead the rest.

“While the men lead their families, when it is matters of FGM, their silence makes the wives have power over daughters,” Gudo said.

After receiving training from Unicef and UNFPA, Gudo now uses his role to talk to men in Tana River county, one of the 22 hotspot FGM counties in Kenya.

“Many say Islam allows FGM, but even if they were to follow ‘hadith’, it doesn’t advocate the extreme cut practised in Tana River,” Gudo says, adding that hadith quotes are subject to authentication.

Tana River practises infibulations, the worst form of FGM in the country, which involves cutting of labia and narrowing of the vaginal opening.

Gudo says most sheikhs in the area shy away from addressing the subject because “talking about the clitoris needs courage”.

With the help of the Anti-FGM Board and other agencies, Gudo has been able to train the councils of elders of these communities.

“If the men in the society change their hearts, their women will listen and we will save our girls,” he says.

Tony Mwebia, founder of MenEndFGM foundation, says most leadership positions in society are held by men and as such, men wield immense power over women.

“If we can convince men to join the fight against FGM, we will end the cut soon,” he says.

“In most FGM-practising communities, men do not partake in the practice directly and have no idea of the damage it causes to girls. If we engage them at an early age to grow up knowing FGM is a harmful practice, then we can make a huge difference.”

He says men are egoistic in nature and in most communities, FGM is thought to be a women thing, but when men are taught it is a human rights issue, they can join the conversation.

In 2012, while volunteering at an agency dealing with Somali refugees, Mwebia got to listen to male refugees sharing stories about how their women were suffering from FGM.

“They spoke of the economic burdens of their wives having to visit hospitals due to FGM complications and them being forced to have extramarital affairs with women from non-cutting communities as they could not enjoy sex with their wives,” he says.

“I listened to them and asked myself why is it that men do not actually talk about this cut.” 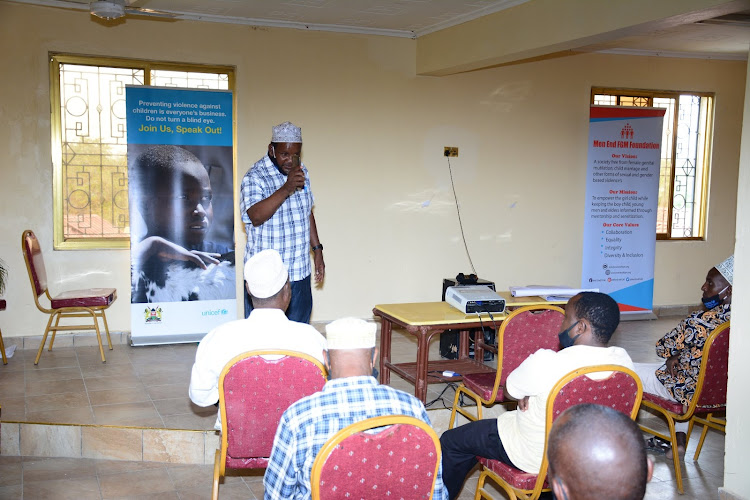 Sheikh Abdullahi Gudo, a religious leader, speaks during a training of men on matters of FGM in Garsen, Tana River county, on May 14
Image: COURTESY

They say girls get cut to control sexual urges towards men, so men are the main reason why they get cut. It’s the reason why we have to be in the forefront of fighting the practice

Since Sheikh Gudo took up his new role of fighting FGM about 10 years ago, he says there is change, although gradual.

“The fact that the community is willing to listen to us is a success already. You couldn’t discuss these matters before openly, and for most of those who have listened to us, their girls have not been cut,” he says.

Gudo’s work has inspired other men in Tana River to come out and advocate girl child rights.

“They say girls get cut to control sexual urges towards men, so men are the main reason why they get cut,” he says. “It’s the reason why we have to be in the forefront of fighting the practice.”

He has started a local CBO called ‘She’sMore’ and regularly holds radio shows in the area to enlighten the community on girl child matters.

“One time after a radio show, some elders called to appreciate the knowledge, saying they didn’t even know there are laws existing against FGM,” he says.

Saadia Hussein, an award-winning female FGM activist based in Tana River, says, “When men acknowledge women have been oppressed and denied their rights and they deserve their dignity restored, then it becomes a collaborative approach that will eventually save our girls from FGM.”

She got a Young Achievers Award by the Anti-FGM Board in 2018 and was recognised as a National Heroine by the state in 2019.

“If we really want to achieve a bright society for all of us, a society that is free from all forms of violence, it’s about men and women to join hands. Men are the head of the family; what if your mother, sister and daughter are also empowered? We want everyone to look at the positive side of life,” she said.

She was also awarded the Commonwealth Points of Light Award by Queen Elizabeth II for her efforts in fighting FGM.

In Samburu, Lemoile’s work has helped Anti-FGM youth CBOs to sprout up.

Four such CBOs with about 20 members each are doing advocacy work in Samburu Central.

“Initially, the community didn’t want to change because they felt ‘outside forces’ were trying to wipe away their culture, but now that the change campaign is from within, they are accepting,” he says.

During Mashujaa Day celebrations last year, Lemoile was recognised by the president as a hero in Samburu for leading the community in activities against FGM.

Lemoile says while perceptions of Samburus to change are high, the approach is critical.

“An NGO called Safe Kenya is helping us sponsor girls to school and economically empower their families. An educated community is more likely to abandon harmful cultural practices,” he says.

Samuel Leadismo is another male anti-FGM activist in Samburu East.

“Some circumcisers say they do it to get cash, so apart from community dialogues, we have to economically empower them,” he says.

Safe’s project uses traditional song and story to break down the taboo around FGM, and follow-up activities to educate and provide the community with space to discuss how abandonment can be accepted and embraced without a loss of culture.

Safe programme director Alice Crookenden says FGM cannot be abandoned sustainably without the involvement of women, men and the youth.

“To promote the active participation of all men in their roles as leaders, fathers and future husbands of girls, Safe’s male team members are leading the movement of men within their communities who are advocating girls' rights,” she says.

The NGO is currently supporting 28 girls who were at risk of FGM and early marriage through secondary school.

Data from Unicef shows that girls and women from rural areas, living in poor households or with less education are more likely to have undergone FGM.

The UN’s fifth Sustainable Development Goal, ‘Achieve gender equality and empower all women and girls,’ targets to eliminate all forms of violence against all women and girls in the public and private spheres, including trafficking and sexual and other types of exploitation.