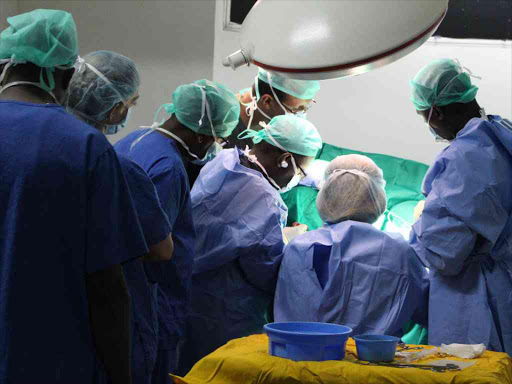 Doctors inside the theater during the surgery on May 9,2017./victor imboto

Surgeons are restoring sexual pleasure and dignity to victims of female genital mutilation.

This is the first such surgery in Kenya.

The simple, brief surgery restores sensation so many women can experience orgasm for the first time. The surgery also widens the vagina so sex is no longer painful and it makes childbirth easier.

Another 22 women had surgery at Mama Lucy Hospital last week.

At Karen, patients pay Sh10,000, the rest is covered by the hospital. Surgery started on Monday and ends tomorrow. It could be extended.

The clitoroplasty procedure uncovers the large remaining part of the clitoris beneath the skin and constructs a new clitoris. Many people think the clitoris is tiny, but the structure with nerve endings is 10-11cm long.

“FGM communities only cut about five per cent of the exposed clitoris. We save the remainder,” says gynaecologist and reconstructive surgeon at Clitoraid Marci Bowers.

Clitoraid is a global nonprofit.

Ann Njeri, 62 (not her real name), scheduled to undergo surgery today, said she will finally lead a normal life.

She was forcibly cut when she was 13 years old. “I asked myself why I’m doing this. But I will feel whole again,” Njeri said. Surgery takes 30-40 minutes.

Before surgery, doctors determine extent of the damage — only four women have been turned away. Bowers has operated on more than 600 women in the US.

One in five Kenyans 15-49 years have undergone FGM, but the rate is much higher in communities viewing it as a rite of passage.

FGM is widespread in Northeastern region at 98 per cent.