Kenyan youth continue to engage in ethnic politics out of pragmatism.

• 97% of  497 students surveyed at UoN identified primarily as Kenyan, choosing their national identity over their ethnic one.

• Most (84%) agreed with a statement that tribal identities hurt Kenyan politics more than they helped. 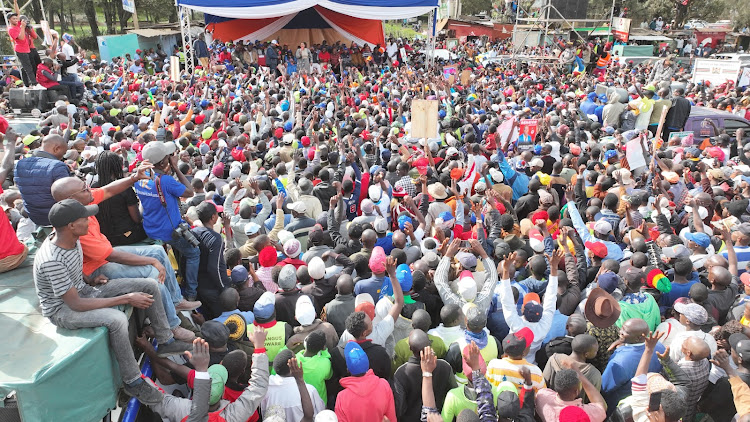 In elections and beyond, young Kenyans are an important political cohort. People between the ages of 18 and 35 make up about 30% of the population and nearly 40% of registered voters in the 2022 election.

According to World Bank estimates, almost 20% of young Kenyans were not employed or engaged in education as of 2019, a frustration that may drive their political views. The COVID-19 pandemic likely worsened the situation given lockdowns in 2020 and 2021.

None of the major political parties and alliances in the current election has put forward a clear vision for young people. Instead, the electorate has been treated to the traditional election campaign menu of implicit ethnic hostilities and the attendant fears of politically motivated violence.

In the country’s last election in 2017, then 23-year-old university student Shikoh Kihika started a hashtag, #TribelessYouth, in response to hateful, discriminatory messages she saw on social media. In 2017, over a quarter of Kenya’s population was on social media. It’s likely that fake news and other online messages designed to stoke fear and ethnic resentment contributed to the violence witnessed in that election.

Kihika’s call for unity among Kenyan youth was shared widely. However, a lasting change in behaviour is harder to detect.

Social media is again being used to spread divisive content in the run-up to the August 2022 election.

Some messages are designed to stoke fear and disrespect, creating a narrative that Kenyans need to defend their ethnic communities.

Do these tactics resonate with young Kenyans, or is there hope for a more “tribeless” political generation?

We decided to study the political attitudes of Kenyan students, particularly their views on the use of ethnicity in politics.

We found that most Kenyan students dislike ethnic-based politics in principle. However, the pressures of tribalism are difficult to ignore.

This suggests that the pattern of ethnic voting and violence in Kenya will be difficult to break, particularly while concerns about ethnic discrimination and exclusion persist.

The students we surveyed widely supported institutional reform aimed at increasing power sharing and inclusion in Kenya’s government, but these changes may be hard to achieve.

What the youth say

Our survey of University of Nairobi students to gauge their views on democracy and ethnicity was done in August 2018.

We surveyed 497 students between the ages of 18 and 35 less than a year after the 2017 general elections. It’s important to note that our results may have been coloured by the 2017 elections, and youth views may have changed since our survey. Also, the views of university students may differ from those of the youth as a whole.

Of the students we surveyed, 97% identified primarily as Kenyan, choosing their national identity over their ethnic one. One-third stated that ethnicity remained an important part of their daily life; 47% said it played a minor or no role.

Most (84%) agreed with a statement that tribal identities hurt Kenyan politics more than they helped. More than one student said:

Tribalism is killing us.

Many students felt, though, that ethnic discrimination negatively affected their lives and politics. Over a third (38%) stated that members of their group faced disadvantages because of their ethnicity.

That number rose to nearly half among students from the Luo ethnic group, who have been repeatedly denied access to the presidency. They are the base of support for presidential candidate Raila Odinga.

The number was greater than half for students from ethnic groups with historically even less political power, such as the Luhya, Kamba and Kisii.

Students’ perceptions of discrimination reflected the common belief in Kenya that members of the president’s ethnic group reap social and economic benefits. Many students stated that the Kikuyu and Kalenjin had advantages in society since, as one student put it, “the president and deputy come from there.”

As a result, Kenyan youth feel pressured to participate in ethnic politics despite their stated dislike of tribalism.

The big fear is that if we do not look out for ourselves, no one will look after us.

Accordingly, 40% of surveyed students agreed that having a co-ethnic in government was important to them.

Only 29%, however, admitted to listening to the political opinions of their ethnic or tribal leaders. This suggests that the youth accept that having a co-ethnic in power has important material benefits, while also acknowledging the dangerous effects of ethnic politics.

Thus, we have a mixed picture: Kenyan youth continue to engage in ethnic politics out of pragmatism. In their actions, they appear to be far from “tribeless”, despite widespread resentment of this system.

How a country like Kenya can move past ethnic politics is something scholars and policy practitioners have long tried to understand. We don’t have many new answers from our research. However, Kenyan students echo many of the solutions proposed by scholars.

For example, students in our survey cited problems with Kenya’s electoral system, in which the “winner takes all”.

They suggested ways to increase power-sharing and inclusion, such as rotating positions between ethnic groups.

Kenyan university students have a sophisticated understanding of liberal democracy and the reforms necessary for it to overcome ethnic divisions. They also tend to support further constitutional reforms to create a less polarised system.

This explains why #TribelessYouth founder Kihika remains hopeful. She told us:

There is a huge number of youth candidates both on political party tickets and as independents. Additionally, young people in the civic space are on the frontline.

However, as shown by the recently failed and polarising move to change the Kenyan constitution – under the Building Bridges Initiative – agreeing on the details of reform is difficult. This is a result of conflict and distrust between self-interested political elites.

August polls: Why the ethnic factor may be losing its power

Politicians often exploit historic grudges, cultural differences to incite violence so they can win elections.
News
2 months ago
Will Kenyans ever stop thinking on tribal lines?

Their recently unveiled agendas, ethnic kingpins and the choice of running mates will also determine who wins.
Siasa
2 months ago