• Raila said he was not amused by the outcome of the exercise in the constituency.

• He said Bondo constituency had done better in the voters registration exercise. 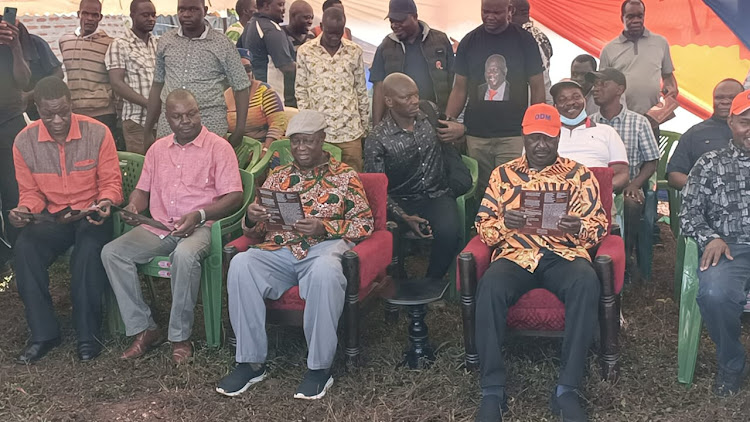 ODM leader Raila Odinga on Saturday differed with Alego-Usonga MP, Samuel Atandi, over the voter registration in the constituency.

Odinga told Atandi that his constituency, with the potential to register more voters, had performed poorly in the recently concluded voter registration conducted by the IEBC.

Raila said he was not amused by the outcome of the exercise in the constituency. He said he was embarrassed and ashamed by the Alego-Usonga people.

He said Bondo constituency which is represented by Dr Gedion Ochanda had done better in the voters registration exercise.

“In Bondo, the Sakwa and Yimbo clans whose population is smaller than Alego registered more people than you. Shame on the people of this area,” he said.

Raila was speaking in Mur Malanga- Ndisi village, Siaya county during the burial of his aide – Sammy Kaduol.

He said Alego-Usonga constituency had the potential to register 200,000 voters.

“ My opponent’s strongholds are registering more voters but here you are busy abusing each other and focusing on non issues,” he said.

Atandi who is facing stiff competition from Nairobi University lecturer Dr Nicholas Kut Ochogo had made his remarks during the burial before inviting other leaders to address the mourners.

In his speech, Atandi appeared to praise the people of Alego-Usonga over the voter registration exercise.

“We mobilized our people to register as voters during the exercise and we managed to increase the numbers to 123,000,” he said.

According to the IEBC 2017 records, Siaya County had a total of 457,953 registered voters and 916 polling stations.

According to those records, Ugenya constituency in 2017 had 57,603 registered voters.

Raila said he was keen to see the number of voters in his strongholds double.

“When I tell you this is a serious matter, you think am joking. I want those who are yet to register to do so in the routine listing that is going on at the IEBC offices at the constituencies,” he said.

Raila said he wants Yala swamp to be transformed into a serious irrigation area to boost food production.

“We want the Yala River waters and the swamp to make a difference here and I have told Atandi to ask those people who went to court to stop an investor from working in the swamp land to withdraw that case,” he said.

Some residents of Yala have moved to court to challenge a plan by the National Land Commission and the county government of Siaya to transfer the swamp to Lake Agro Limited.

He said Ruto is still in office today because he is protected by the Constitution.
News
2 months ago

Raila men vow to lock Ruto out of Nairobi

Azimio la Umoja team have lined up a series of rallies in the city
News
2 months ago
WATCH: The latest videos from the Star
by DICKENS WASONGA
News
27 March 2022 - 15:43