Don't discriminate against me for being Uhuru's lawyer - Ngatia

Senior Counsel says his relationship with the head of state ended at the cases.

• Senior Counsel Fred Ngatia has dismissed fears that his closeness to President Uhuru Kenyatta might interfere with the independence of the Judiciary should he become the next Chief Justice.

• He urged the commission to look at him in a wholistic manner without discriminating against him because of representing the head of state. 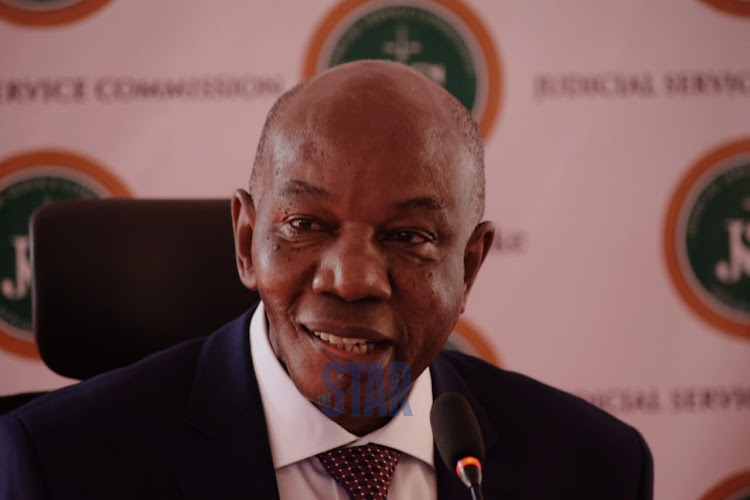 Senior Counsel Fredrick Ngatia when he appeared before the Judicial Service Commission panel for the Chief Justice position at the Supreme Court on April 20, 2021.
Image: CHARLENE MALWA

Senior Counsel Fred Ngatia has dismissed fears that his closeness to President Uhuru Kenyatta might interfere with the independence of the Judiciary should he become the next Chief Justice.

Ngatia on Tuesday told the Judicial Service Commission panel that though he is happy to have represented the head of state, their relationship ended at the case.

“I was appointed in 2013 to lead a team for which I am forever grateful and in 2017 I was appointed to do the same. Despite acting for the president-elect, I went back to my private practice," Ngatia said.

On the perception that he is close to Uhuru having represented him twice in the presidential election petition, Ngatia said, that was just a client like any other and has not in any way tried to influence him or interfere with his decisions.

"The President has at no time tried to interfere or influence me in any decision I had done,” he said.

He urged the commission to look at him in a wholistic manner without discriminating against him because of representing the head of state.

“No Kenyan properly informed will see me as being influenced by the President. I have worked for condemned prisoners as well as many other Kenyans and I am not in any way influenced. Do not discriminate against me for the clients I have acted for,” said Ngatia.

Why I'm the best bet for Kenya's next Chief Justice - Senior Counsel...

The Senior Counsel said he will want to be remembered as the CJ who will not only clear the backlog of cases but also ensure expeditious disposal of cases.

He gave an example of Singapore where he wants to borrow from.

“Singapore had a huge backlog of cases and. Within four years they did overcome that backlog and simultaneously put in place a system I am craving for which ensured cases are being dealt with in good time,” Ngatia said.

“It's one of the shining examples of what can be done in a short time. I will be the CJ that will end the backlog and have expeditious disposal of cases as the court."

As a CJ, he said, he will ensure criminal cases will be concluded in six months.

“I would not be a CJ where criminal cases take so long that witnesses disappear and acquittals are granted,” he said.

And in order to achieve this ambitious proposal, Ngatia said he will talk to all stakeholders in the National Council on Administration of Justice to play their roles.

Ngatia surprisingly said he would not have been interested in the CJ position before 2010 but now he is.

A post-2010 CJ, he said, is a leader who will take this nation to a level of competing with Kenya's equals in the world.

Ethics is one of his core attributes and as such he will bring that on board.

Ngatia insisted he will inculcate the culture of serving Kenyans and correct work ethics.

Ngatia said he managed to be a successful lawyer due to his perseverance and will also bring on board the value of continuous learning.

On the issue of whether an insider or an outsider should become the 15th Chief Justice, he said, merits should guide the commission.

He gave an example of Chief justice Warren of the US whom he said having come from private practice and at one time being governor managed to abolish racial segregation in the US which subsisted for more than 70 years.

Even though the US is the most liberal democracy racial segregation bedevilled it for so long and career judges who became CJs were not able to deal with it.

“Warren never held a judicial position and became CJ and when the question of racial segregation came, Warren marshalled all his colleagues and held that there can never be racial segregation in the US...something career judges who became CJs were unable to do,” he said.