The Senior Counsel has 41 years of legal experience under his belt.

• Ngatia also took credit for the acquisition of land where the Kasarani Sports Complex stands.

• Ngatia if appointed as a CJ will move the Judiciary to the next level by putting in place a system that will ensure expeditious disposal of cases. 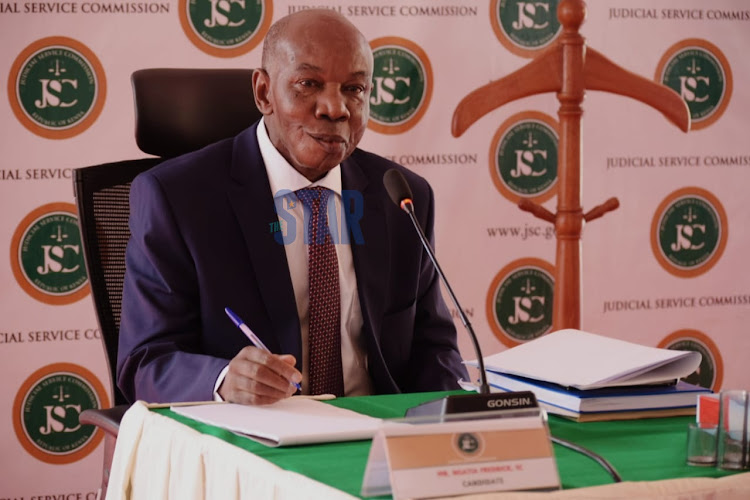 Senior Counsel Fredrick Ngatia when he appeared before the Judicial Service Commission panel for the Chief Justice position at the Supreme Court on April 20, 2021.
Image: CHARLENE MALWA

Senior Counsel Fred Ngatia who has 41 years of legal experience under his belt says his work in the early days of his career led to the settling of a boundary dispute between Kenya and Sudan.

He says he is best suited to be Kenya's next Chief Justice.

Ngatia is one of the 10 shortlisted candidates for the position of Kenya's next Chief Justice.

He told the JSC panel on Tuesday that his research work on the boundary dispute led to Kenya acquiring an area measuring 9,680 square meters which is larger than the former Western province.

In 1914 boundary between Sudan and Kenya was prescribed as a straight line.

Those grazing grounds in Turkana were never defined but a survey in the 1930s said the boundary was above the demarcated line.

Don't discriminate against me for being Uhuru's lawyer - Ngatia

Sudan then came up with something called patron line, but eventually, his research work helped move the boundary giving Kenya victory.

Ngatia also took credit for the acquisition of land where the Kasarani Sports Complex stands.

“Perhaps I should say I started my legal career in 1980 and allocated many difficult briefs among them the acquisition of the land where Kasarani Sports Complex stands," he said.

"The then owners had objected because we were using government acquisition act and the owners were saying this is nothing more than the government taking over the land for its own use,” he said.

Some of the cases he has handled in his career include representing National Assembly against the Senate on the Division of Revenue Bill in an advisory opinion at the Supreme Court.

Two years ago, he was instructed by the Council Of Governors to represent them on the Division of Revenue Bill.

He also says the Judiciary lacks someone who has been a consumer of this service to lead it.

"I have been to almost all courts in the country. I do believe that I have a practitioner's eyes to be able to see the weakness of the systems," he said.

On leadership, he said he helped bring down the University of Nairobi student strikes as there was rampant wastage of resources during that period.

He said three years ago, he was approached by the university's Senate to look into the ills at the institution.

"I started working with the universities to be able to find a solution on how to deal with the 80,000 students," he said.

The Senior Counsel said he saw the problem as that there was no harmony in disciplinary processes.

"I came up with a handbook that helped to curb this issue of the perennial problem of indiscipline," he added.

Ngatia if appointed as a CJ will move the Judiciary to the next level by putting in place a system that will ensure expeditious disposal of cases.

Though he says that the Judiciary has under the past two CJs concentrated on access to justice through hiring more judges and building more courtrooms, there is a need to move to the next level which can only be done through quick finalisation of cases.

“As a consumer of service, I have that little more knowledge. I have been a victim of delayed judgements and like measure many good things to say,” he said.

He gave an example of South Africa which has a case management system from the filing to the ending of a case.