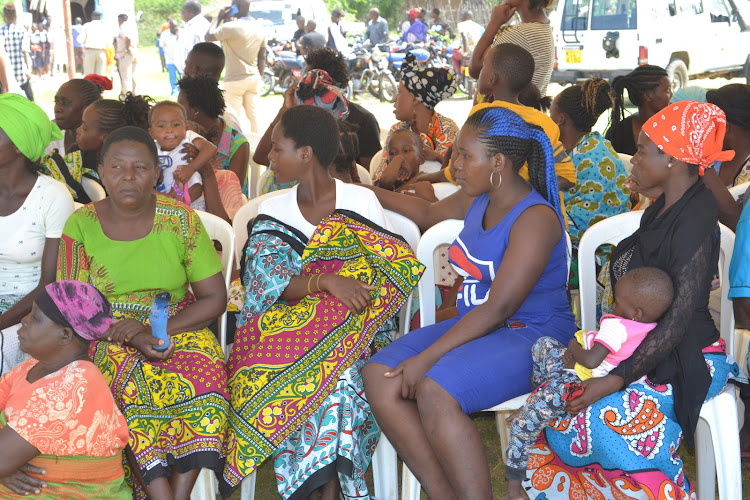 Residents of Magarini at the launch of the campaign against teenage pregnancy at Marereni in Kilifi county
Image: ALPHONCE GARI

Cases of defilement by relatives have plagued Kilifi county. In most cases, they go unreported as it is taboo to talk about such social ills.

Many girls and mothers choose to remain quiet over the crime as it may result in broken marriages.

“Most of these ills are perpetrated by very close family members. You will find a father defiling his daughter or a brother defiling a sister. Even if other family members become aware of the act, they will do everything to conceal it,” Uchi said.

“A girl will be asked to trick and sleep with another boy so he can be framed for the pregnancy just to save the family member. This is one of the reasons teenage pregnancies are rampant in Kilifi.”

Uchi called on girls to make sure they report any form of abuse by family members even if they are the sole breadwinners.

“You see most perpetrators are breadwinners in their families. They take that advantage to sexually abuse the minors, who look upon them for guidance. This has been a challenge as the victims know the perpetrators will be protected by other family members,” she said.

In November 2018, more than 13, 000 teenage girls in Kilifi county were reported to be pregnant.

A further 290 girls aged 10-14 were reported pregnant over the same period.

Why Kilifi is struggling to tame teen pregnancies

The disturbing statistics compelled Kilifi Governor Amason Kingi to institute a task force to investigate the cause of early pregnancies in Kilifi county.

The 16-member task force went around the county on a fact-finding mission. The task force was to table their finding by end of June 2019 but to date, the report is yet to be made public.

Kingi announced the formation of the task force while launching the Kilifi County Adolescents and Young Persons Sexual Reproductive Health Rights and HIV Strategy 2019-2022 in April 2019.

Deputy Governor Gideon Saburi launched the campaign ‘No to teenage pregnancies. Let me be a girl and not a mother’ at Marereni’s Kasarani grounds in the Magarini subcounty.

The campaign brought together the county government departments of Gender, Culture and Social Services, Health and Sanitation, and Education.

Also brought on board are officers from the national government and NGOs.

In January this year, Kilifi county commissioner Kutswa Olaka said 946 school-going girls were expectant. 640 of them are in primary schools while 306 are in secondary schools.

As the government is still looking for the cause of teen pregnancies, many teenage girls are defiled and impregnated by relatives.

The Kilifi government banned disco matanga as a measure to contain teenage pregnancies but the numbers keep rising.

Defiled and impregnated by a brother, rejected by family
Post a comment
WATCH: The latest videos from the Star
by ELIAS YAA Correspondent, Coast Region
Health
16 April 2021 - 04:00
Read The E-Paper