As the campaign season peaked in April 2022, cash circulating outside formal banking systems hit an all-time high of Sh252 billion 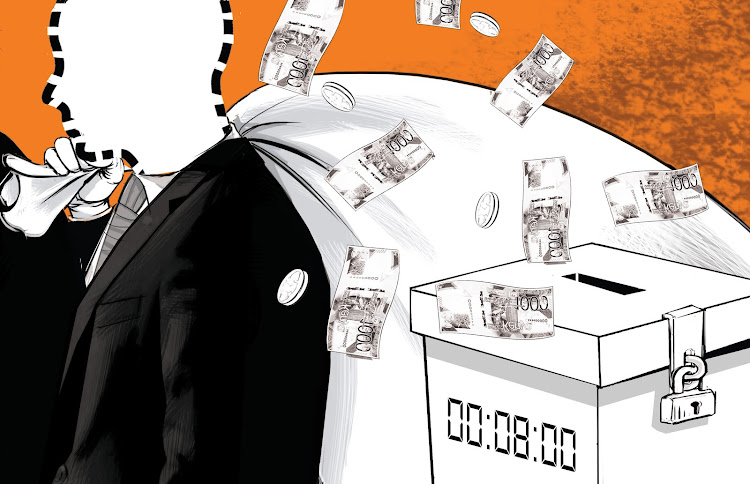 What is absurd, not only lies in shifting alliances but also in the way campaigns are being conducted by people of dubious character running for office and large amounts of money being splashed across all divides.

As the campaign season peaked in April 2022, cash circulating outside formal banking systems hit an all-time high of Sh252 billion ($2.1 billion) fuelled by unbridled election spending, in a country where a third of the population lives with less than $1.90 a day.

Campaigns during this electioneering season have clearly broken previous records, earning the distinction of yet again being referred to as “the most expensive in Kenya’s history”.

The two main contenders have been using helicopter fleets in campaigns whilst massively spending on branding, digital or mainstream media, and cash handouts that have become commonplace countrywide.

A major concern rests on understanding the sources of campaign funds being splurged by major political campaigns considering insinuations of state support, colourful international business links, and accusations of links to dirty money.

While on one hand Odinga, who is running for the fifth time, has mounted his most expensive campaign ever is viewed as “semi-government” reference to illegal access to state coffers; Ruto must keep answering questions about corruption links in financing his formidable campaign.

The funds were suspected to be proceeds of corruption, obtained from government agencies through fraudulent means. The 2022 elections, therefore, have a serious integrity deficit in relation to public finances among aspirants at all levels.

Serious concerns, therefore, exist about the integrity of individuals running for different offices. Almost every high-ranking politician who has been taken to court for economic crimes is running for public office in the current elections.

The Ethics and Anti-Corruption Commission (EACC) recommended that 241 candidates, most of whom are under investigation or in court for financial malfeasance be barred from the elections.

Sadly, only six were barred. For instance, former governor of Nairobi Mike Sonko managed to get clearance to run for governor of Mombasa- Kenya’s second biggest city- despite having a US State Department designation and a trail of court cases related to corruption.

He was stopped from running by the Supreme Court only a few weeks to the elections.

Unsurprisingly, both political coalitions have paid lip service to corruption, economic crimes, and the stashing of stolen assets in other jurisdictions.

None of their manifestos satisfactorily mention anything on international tax policy, beneficial ownership transparency or the strengthening of financial transparency in the country.

This is despite Kenya ranking the fourth highest African country in the Financial Secrecy Index (FSI) largely due to its growing importance as a financial centre with the recent launch of the Nairobi International Financial Centre (NIFC) with a host of tax breaks and benefits on offer.

Clear propositions for reforms relating to the country’s financial architecture are also lacking.

While both outline accountability and good governance as either principles or priorities, they do not really provide any defining key steps to achieve this such as enhancing beneficial ownership transparency, the repatriation of assets traced in other jurisdictions and barring individuals involved in significant corruption from public office.

Demanding an integrity threshold for contenders within their ranks should have been the first step towards accountability but this was absent on both sides.

All main contenders acknowledged the difficult path to a post-Covid-19 recovery including the high inflation, food shortages, and energy crisis driven by the Ukraine crisis.

Yet very little has been said about how crucial financial transparency reforms are in generating enough funds for healthcare, social protection, and financing development amid this context.

According to the Financial Transparency Coalition (FTC), this is especially relevant since 92 per cent of Covid-19 bailout funds in Kenya in 2020 went to big corporations instead of social protection or supporting informal workers and small businesses.

This means that those that were most affected by the crisis received the least support. Kenya’s adoption of better practices and new standards, therefore, holds an important role internationally and its stance on these crucial issues will directly influence what other countries do in the region.

Political and economic stability in Kenya is also crucial because numerous other African states in fragile conditions including Somalia and South Sudan rely on Kenya for their stability.

This is a high-stakes election. A new government will have a full plate of issues to deal with.

Kenya’s stability and functioning financial architecture have provided a gateway for cartels in the region involved in money laundering, gold smuggling and human trafficking.

Government ministries, departments, and agencies will need to work harder on strengthening the financial system to stop them.

This is especially critical as numerous politicos and elites, continue stashing their wealth abroad. A new government will need to prioritize the tracing and seizure of offshore wealth belonging to Kenyans for development needs.

The law on voter bribery
Post a comment
WATCH: The latest videos from the Star
by BY FRANCIS KAIRU AND LEONARD WANYAMA
Kenya
08 August 2022 - 04:00
Read The E-Paper