“I made many wrong decisions in the first nine and it almost cost me a good round,"—Chinhoi

•“I just could not put today. However, I have been on the practising green trying to get my putts right and ready for tomorrow,” —Kibugu 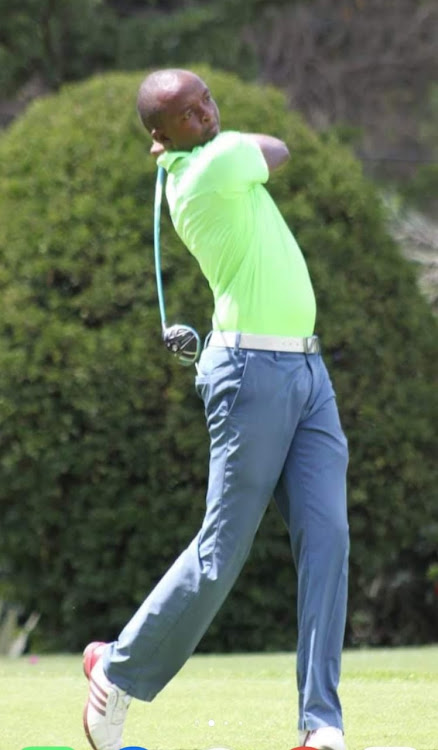 Golf Samuel Njoroge in the past event.
Image: FILE

Zimbabwe’s Robson Chinhoi made four straight birdies at the back nine of the third round to share the lead with Kenya Railway’s Samuel Njoroge on four under par 212, going into today’s final round of the 2020 Safari Tour second leg at Royal Nairobi Club.

What a tremendous recovery it was for the Zimbabwean, who had carried a one over par score from the front nine, where he hit three back-to-back bogeys from the fifth to the seventh holes, to eventually post a three under par 69, same as Njoroge.

“I made many wrong decisions in the first nine and it almost cost me a good round. I started well, picking up two birdies at the first and second holes, then pushed my tee-shot to the right at the fifth hole; came out well but missed the par,” said Chinhoi, who thereafter hit his eight iron to the bunker at the par three-sixth, came out with two to drop his second shot.

He started the back nine with a birdie after a solid driver to about 70m to the green, dropped a shot at the 12th, but made birdies at the 15th, 16th, 17th and 18th to push himself to the top of the leader-board to share the lead the newcomer Njoroge,.

Njoroge made a double bogey at the 12th and dropped another shot at the 16th but had made birdies at the seventh, 10th, 13th and the two par five-14th and 15th for the day’s three under par 69.

“This course is very easy to make birdies if one makes the right decision,” said Chinhoi who said he will be going for it in the final round. “Winning here will give me the confidence I need for the season and particularly after missing the first leg at Limuru,” added Chinhoi.

Njoroge, who said his aim is to win the event after finishing second in Limuru, said the greens were nice and soft after the little rain in the morning. “I decided to change my attitude and take one shot at a time and this paid off for me’’ said Njoroge, a young brother of Professional Golfers of Kenya (PGK) captain John Wangai.

Meanwhile, Wangai made five birdies against a similar number of bogeys to close Day 3 on level par 72 and in third position on level par 216.

“I just could not put today. However, I have been on the practising green trying to get my putts right and ready for tomorrow,” said Kibugu who is eyeing next week’s Kenya Amateur Stroke Play at Royal.