'BRAINS IN THE MIDDLE, LEGS OUT WIDE'

What Wales need when they face Iran on Friday

I know we don’t have the same quality throughout our team that England do, but the way they got their 6-2 win still has to be the blueprint for Rob Page in Friday’s game.

• We have got the players to do that too, but we will need the right formation to build attacks the way I want us to, and for me that means switching to four at the back — again, exactly like England did.

• Let’s be positive, and let them loose to run at Iran’s defence to do some damage the way the likes of Bukayo Saka did for Gareth Southgate’s side on Monday. 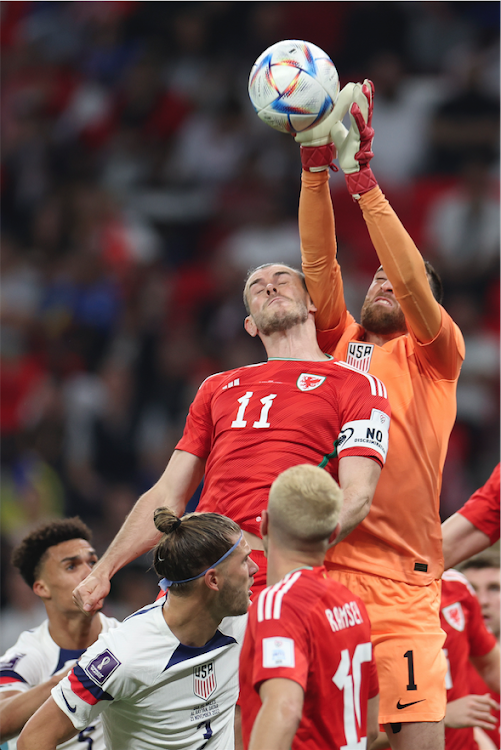 It won’t be easy for Wales against Iran, but we have to win — and we can learn from England to get the result we need.

I know we don’t have the same quality throughout our team that England do, but the way they got their 6-2 win still has to be the blueprint for Rob Page in Friday’s game.

I am talking about the tempo they set and how they moved the ball quickly, got it into wide areas and then delivered it into the box.

They kept putting the Iran defence under pressure, kept asking them questions… and we saw what happened in the end.

We have got the players to do that too, but we will need the right formation to build attacks the way I want us to, and for me that means switching to four at the back — again, exactly like England did.

Whatever Page’s plan is, Gareth Bale, Aaron Ramsey and - hopefully - Joe Allen will play a crucial role in making it work, but they are all in their 30s now, and they cannot do it on their own.

So, we have to pick people around them with energy to give us the intensity we need and it is a case of having our brains in the middle of the pitch and our legs out wide.

Brennan Johnson and Daniel James are young, fearless and hungry. Let’s be positive, and let them loose to run at Iran’s defence to do some damage the way the likes of Bukayo Saka did for Gareth Southgate’s side on Monday.

Iran’s plan could be different

It goes without saying that Kieffer Moore has to start this game for Wales after his impact off the bench against the United States but we have to feed him in the box more this time, rather than just using him to get us up the pitch, because he will score goals too.

Moore nearly grabbed an equaliser against the US when he headed over from a corner, but we didn’t find him in front of goal with any crosses in open play and that is the kind of service I want James and Johnson to be giving him this time.

I am not taking Iran lightly here by the way, and I am certainly not expecting this game to be easy just because England took them apart. Our task is clearer after the first set of games and our draw with the US, but this really is make or break for Iran after losing their first game so heavily.

They will have seen how the US caused us problems in the first half and they could come out and press high too. Just because they didn’t try that against England, in their hardest game in Group B, doesn’t mean they won’t do it to us.

And, while they are usually pretty cautious under Carlos Queiroz and like to defend deep, they are going to have to have a go and attack at some point.

They scored twice against England, remember, so they do have a goal threat. If we do go ahead, they will come at us because another defeat and they are out.

Why a fluid formation is key

Whatever Iran try to do, our aim has to be to dominate possession against them the way England did, and play the game in their half.

Unfortunately, I don’t think the 3-5-2 formation we started with against the US will help us do that. It’s not fluid whether we’re in or out of possession, and our players don’t have enough options in different areas when they do get on the ball - the wing-backs, for example, don’t have anyone wide in front of them so they have to play the ball back to a centre-half if a quick ball inside into midfield isn’t on.

Then you have Neco Williams and Connor Roberts feeding them and also looking to go on the overlap like Luke Shaw and Kieran Trippier did for England. Suddenly we are a much more dangerous-looking team.

Playing 4-4-2 is the key to getting the best out of Aaron Ramsey too. He didn’t have a great game against the US and gave the ball away more times than I’ve ever seen him do before, but he eventually tried to find a different way of affecting the game and started running beyond Moore to try to move opposition players about.

We really want him on the ball against Iran, though, or arriving late in the box after Moore and Gareth Bale to get on the end of those crosses I was talking about, because he is the master of that.

Ideally Ramsey would be starting his runs far deeper, in a similar position to Jude Bellingham’s for England, and we saw how that worked out.

England’s 4-3-3 became a 4-2-3-1 when Bellingham got forward, and he got their first goal in the same way we have seen Ramsey score so many times before.

I’m confident that the players I’ve mentioned so far will perform but, for all of this to work the way I want it to, we need Joe Allen as one of our men in midfield. We just won’t be able to control the game as well without him.

I talked about his importance to the team in my column before the US game and although he won’t be fully fit yet, this has to be the time to risk him. Even if he can only play 60 minutes or so, it is worth the gamble.

We play England after this, and we really need to have four points going into that game to have a chance of getting out of the group, so there is no point saving anyone now.

Let’s go for it, and give ourselves the best chance of beating Iran by picking the right players and choosing a system that suits their strengths.

For some football fans, dreams of watching or even attending the World Cup have come true in Qatar.
Sports
3 days ago

Zero-Covid China asks: Is World Cup on another planet?