•The development comes barely a week after he gave a subtle hint he was planning to regain control of the country's football.

•Addressing the media from Kandanda House on Tuesday, Mwendwa reiterated his desire to have the ban by the world football governing body, Fifa, lifted immediately. 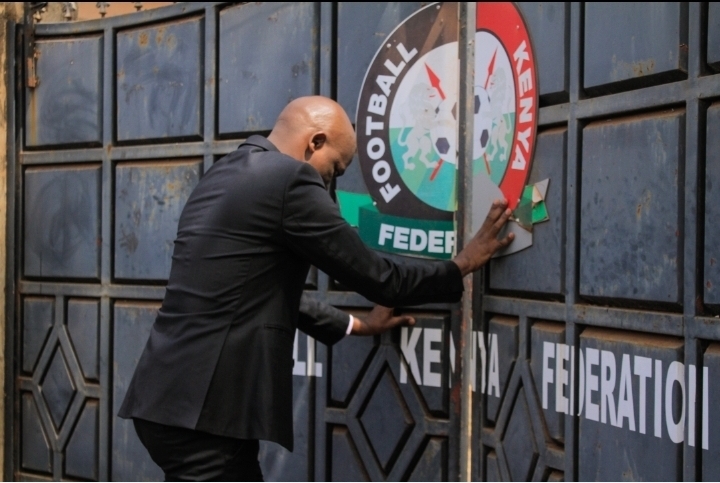 Sports Cabinet Secretary Amina Mohamed has censured expelled Football Kenya Federation boss Nick Mwendwa for spitting in the face of the law after he stormed the federation's offices on Tuesday.

The embattled FKF president emerged from the cold to seize control of the federation's offices at Goal Project in Kasarani, exactly 313 days after he was locked out.

Mwendwa stormed the FKF premises early Tuesday accompanied by chief executive officer Barry Otieno and a host of other officials. The development comes barely a week after Mwendwa gave a subtle hint he was planning to regain control of the country's football.

In a statement, Amina said Mwendwa's actions reflected a blatant disregard for the Kenyan judicial system.

“My attention has been drawn to a break-in at the FKF offices at Kasarani. The information is that the break-in was led by indicted FKF officials, who were legally removed following an inspection by the Office of the Sports Registrar,” Amina said.

“It's quite unfortunate that some people decided to follow another direction simply because they wield excess power,” Mwenda said.

“We have only one federation in this country. Some people have wrongly claimed ownership of the federation for almost a year now. Let them continue misleading the public,” he asserted.

But in a terse rebuttal, CS Amina said she acted procedurally to constitute the FKF Transition Committee.

“The decision by the Ministry of Sports, Culture and Heritage on November 11, 2021 has since been upheld by the Ruling of the High Court of Kenya on May 10, 2022,” she said.

The CS cited Paragraph 111 of the High Court Ruling on Petition No. E473 of 2021 Judge H.I Ong’udi that ruled: “After all the above deliberations, I find that save for the issue of the petitioners not being served with the report/recommendations for their reaction and which has been well explained, I find that the respondents (Ministry of Sports, Culture &Heritage) acted within their mandate under the Sports Act to save FKF.”

“It is instructive to note that this decision rendered on May 10, 2022 has not been vacated/reversed and the FKF Transition Committee remains in office and in charge of football management in Kenya,” the ruling stated.

The CS said her decision to eject Mwendwa's team was informed by grave allegations of graft facing the expelled office.

“The reasons the FKF NEC was removed from office include the Legal Status of FKF (incompatible with the Constitution of Kenya 2010, Sports Act 2013 & Sports Registrar’s Regulations 2016.”

She bashed the expelled federation for allegedly embezzling funds advanced to FKF by the Government, Fifa, CAF, Multichoice, Odibet, Afcon, Safaricom among others. Amina said Mwenda held illegal elections at the county and national level.

Amina's decision led to Kenya's suspension from the international stage by the world football governing body, Fifa. Fifa demanded Mwendwa's reinstatement as a precondition for lifting the ban.

Mwenda reiterated his desire to have the ban by the world football governing body, Fifa, lifted immediately.

Football will be back next month, says Nick Mwendwa

Mwendwa asked the local football fraternity to prepare for action beginning next month.
Sports
2 weeks ago

Mwendwa complicated the already delicate situation in Kenyan football after announcing on Friday, that he would seize the leadership of FKF once ...
Sports
2 weeks ago
Post a comment
WATCH: The latest videos from the Star
by TONY MBALLA
Football
21 September 2022 - 05:00
Read The E-Paper