WHAT MADE THE DIFFERENCE?

Curtis Main was manager Stephen Robinson’s pick as he singled the striker out for praise, highlighting his tirelessness.

• In five of their opening six league games, Celtic had been in front by half-time, usually by more than one goal. St Mirren were determined not to be added to the list.

• No efforts on goal had been recorded by the time Ryan Strain broke on the right and crossed for Mark O’Hara to head St Mirren’s opener shortly before the break. 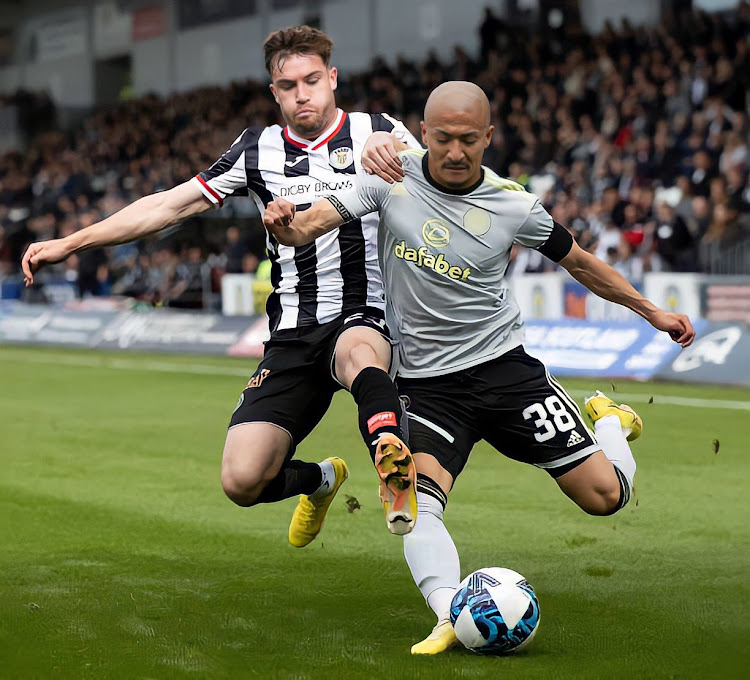 A year is a long time in football, and 364 days almost as long. And that’s the period of time Celtic had gone without losing a Scottish Premiership game until St Mirren ended the sequence with a 2-0 victory on Sunday.

Curtis Main was manager Stephen Robinson’s pick as he singled the striker out for praise, highlighting his tirelessness. Main led from the front but all those behind him followed suit.

St Mirren excelled in one area so many other Premiership teams have struggled against Celtic — restricting space.

Unlike Celtic’s 5-0 win at Kilmarnock, the 9-0 humbling of Dundee United, and the 4-0 derby victory over Rangers, there were little or no piercing balls in behind the defence for wingers to run on to and deliver crosses. The Paisley side were content to let Celtic’s defenders and deepest lying midfielder Callum McGregor have the ball far from goal and restrict the forward pass options.

In five of their opening six league games, Celtic had been in front by half-time, usually by more than one goal. St Mirren were determined not to be added to the list.

“You have to give St Mirren so much credit for the way they approached the game, negated Celtic’s threat, how organised they were and the work rate. It was exceptional,” former Paisley forward Steven Thompson said on Sportsound.

No efforts on goal had been recorded by the time Ryan Strain broke on the right and crossed for Mark O’Hara to head St Mirren’s opener shortly before the break.

An earlier run by Jonah Ayunga had pulled Celtic’s defence out of position, and in the second half it was more of the same. Declan Gallagher’s long throw-in was the catalyst for goal number two, a bit of head tennis ending with Main nodding across for Ayunga to finish right in front of goal. And it could have been more with O’Hara nodding another impressive Strain delivery wide.

“Full credit to the players,” said Robinson.” We work all week on things, it isn’t too far from what we do in general in games, just maybe a bit further back in the pitch and we spring and we break with good pace. The boys are the ones who do it.”

As expected, Celtic dominated possession and attempts. Indeed, the only two on-target efforts of St Mirren’s four shots were the goals.

But Celtic scarcely tested Trevor Carson in the St Mirren goal. There were a few comfortable takes for the experienced goalkeeper and he was helped out by a Richard Tait clearance after palming a low cross into the six-yard box.

The visitors’ 14 shots off target indicated how little space their attacking players were afforded to get efforts away. Celtic simply didn’t get the freedom they have been so used to exploiting in 2022.

“Normally when Celtic’s opposition get a result like this, you’re talking about the goalkeeper having a tremendous game, save after save - that was not the case today,” said former Parkhead keeper Pat Bonner on Sportsound.

Manager Ange Postecoglou accepted that his players had not matched their previous levels but also praised St Mirren’s tactics.

And Robinson added: “Celtic are a top, top side. When playing them, you need people to be brave and get a hold of the ball. That’s the most pleasing aspect of the game for me, we played and passed and hit them on the break.

“At any stage of the game, Celtic can turn it on the head with their quality with a moment of brilliance but our shape and discipline was maintained for 94 minutes.”

Rangers into final with extra-time win over Celtic

Crestfallen Rangers left to ‘start from zero’ after final loss

Former Barcelona and Netherlands full-back Van Bronckhorst said Rangers had shown that they had the quality to play at the elite European level.
Sports
4 months ago
Post a comment
WATCH: The latest videos from the Star
by BBC
Football
20 September 2022 - 00:00
Read The E-Paper