Will the Ruto administration save Kenyan football?

President Ruto should appoint a hands-on Sports Cabinet Secretary with the mojo to exorcise the spooky haunting Kandanda House.

•Kenyan football has been stuck in the mud ever since the world football governing body, Fifa, imposed a ban on the country to protest Anima's decision which it described as 'third party interference'.

•With Ruto's presidency comes renewed zeal and hope his administration will put the matter to rest once and for all for Kenyan teams to start gracing the international stage once again. 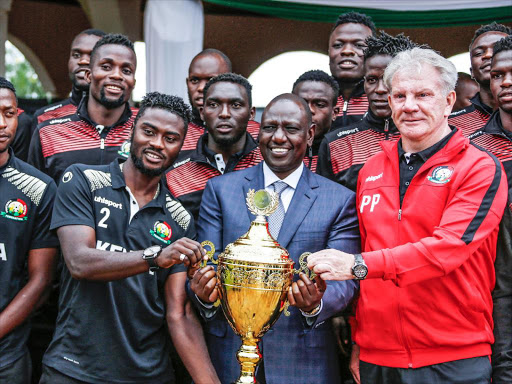 William Ruto has finally been sworn in as Kenya's fifth president amid renewed and heightened expectations in the world of football.

His election offers a ray of hope for a besieged nation that has sunk into despondency after being subjected to a raft of ordeals and theatrics by incompetent football administrators.

The country's attention now shifts to the person who will be handed the mandate to manage the Ministry of Sports portfolio. A lot of names have already been floated around for consideration.

Speculation about the suitable candidate continues to liven up the streets, pubs, offices, estates and football fields.

Despite the zeal exhibited by enthusiastic fans in proposing names, the buck stops with President Ruto.

There is a good reason why everyone seems so keen on the aforementioned docket.

The reality is that our football management has perennially wallowed in the murky waters of ineptitude. The expulsion of the Nick Mwendwa administration late last year brought the situation to a head.

Now, the issue of Mwendwa has popped up once again and it seems to be paining some heads terribly.

In his characteristic element, the firebrand football administrator emerged from the shadows gun blazing on Friday, where he announced his intention to reclaim the FKF leadership.

From his body language, he seems convinced he is on his way to Kandanda House.

Mwendwa's confidence is pegged on the supposedly warm mutual relationships he enjoys with President Ruto. Mwendwa broke a lengthy silence on August 15 to congratulate Ruto for bagging the presidency.

Word has it that Mwendwa had been hoping for a Ruto win all along to boost his chances of returning to football.

In one of his tweets, Mwendwa shared a poster congratulating the President-elect.

He also shared a video of him speaking in 2017, where he is heard predicting the outcome of the August 9 presidential polls.

It is in that event that Ruto promised a Sh50m gift to the team in the event they qualify for the 2019 Africa Cup of Nations (Afcon), which they did.

However, his obsession with the president's name has ruffled some feathers.

On Saturday, FKF presidential aspirant Twaha Mbarak called out Mwendwa for cunningly invoking Ruto's name for selfish gains, insisting it was one of his vain attempts to hoodwink the country.

Then on Monday, AFC Leopards chairman Dan Shikanda mustered up the courage and politely asked Mwendwa to forget the presidency.

Kenyan football has been stuck in the mud ever since the world football governing body, Fifa, imposed a ban on the country to protest Anima's decision which it described as 'third party interference'.

Whether or not Mwendwa deserves his job back is a topic for another day.

With Ruto's presidency comes renewed zeal and hope his administration will put the matter to rest once and for all for Kenyan teams to return to the international stage.

The only way he can achieve this is by appointing a hands-on Sports Cabinet Secretary with the mojo to exorcise the spooky haunting Kandanda House.

Mwendwa complicated the already delicate situation in Kenyan football after announcing on Friday, that he would seize the leadership of FKF once ...
Sports
1 week ago

The rise, fall and reincarnation of Nick Mwendwa

The firebrand football adminstrator announced his return on Friday as president of the Football Kenya Federation (FKF)
Sports
2 weeks ago
Post a comment
WATCH: The latest videos from the Star
by TONY MBALLA
Football
14 September 2022 - 05:00
Read The E-Paper