Paris St-Germain have a long-term interest in the player.

• Rashford struggled last season - failing to make an impact after missing the start of the campaign following shoulder surgery.

• He scored four goals in 25 Premier League appearances and lost his place in the national squad. 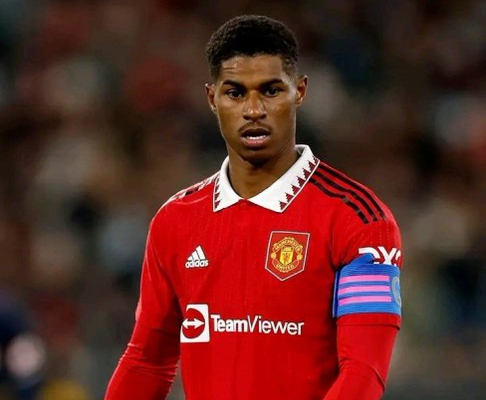 Manchester United manager Erik ten Hag says he "loves" Marcus Rashford and expects the England forward to remain with the club this season.

Rashford's representatives met with French side Paris St-Germain, who have a long-term interest in the player.

But Ten Hag wants the England forward, 24, to remain at Old Trafford.

"He knows I love him, he knows I want him to be here," added the United boss. "You have seen from the first day I'm here, I'm really happy with him."

Rashford struggled last season - failing to make an impact after missing the start of the campaign following shoulder surgery.

He scored four goals in 25 Premier League appearances and lost his place in the national squad.

The forward started last Sunday's Premier League opener against Brighton, but missed a clear chance to bring United back into the game, which they lost 2-1.

Ten Hag rejects the notion Rashford's confidence has been damaged.

"We are talking about one game," said the Dutchman. "In pre-season, he did score. He was in the right place at the right moment. I know and trust he will finish in the future."

In a turbulent week following the Brighton loss, United have withdrawn from talks with former Stoke and West Ham striker Marko Arnautovic but negotiations are at an advanced stage with Juventus midfielder Adrien Rabiot.

Ten Hag refused to discuss individual targets but is adamant he is on the same page as the club with regard to potential signings.

And, asked by BBC Sport whether he expected to have a stronger and more rounded squad when the transfer window closes on 1 September than he has now, he said: "We have to. I am convinced we will have."

That may not appease some fans, who feel their club is being left further behind by the rest of England's top clubs.

But Ten Hag is adamant a sense of panic outside Old Trafford is not being felt by those within the club.

"When Manchester United is not performing and not winning, that's normal," he said. "I would be more in panic when there wasn't panic because we have to win. That is the demand.

"Still, panic isn't the right word. It's more like, 'come on, we have to act'. We have to think bright and do the right things."

Rashford to PSG is an interesting move

PSG want him as a forward to come and strengthen the attacking line. He is the player they want, but I don't think they will let him go and I think he will be happy to stay at Manchester United.

It was interesting from PSG to move to someone like him. It is not strange because he is talented but he has been out of form for 18 months and would need to relaunch his career.

It could be partly the agent game, but PSG asked the agent to come and meet them. They met, they discussed positions and contracts, which means there was a positive response from the Rashford entourage. We also know Rashford and Kylian Mbappe are quite good friends.

New United boss Erik ten Hag was asked about the 33-year-old Austrian after Sunday’s 2-1 defeat by Brighton.
Sports
1 month ago

Rashford has not played for England since the Euro 2020 final and was little more than a fringe player for United last season.
Sports
2 months ago
WATCH: The latest news in African Sport
Post a comment
WATCH: The latest videos from the Star
by BBC NEWS None
Football
13 August 2022 - 03:12
Read The E-Paper