Nyamweya made the remarks a day after Sports Cabinet Secretary Amina Mohamed named a Transition Committee to take the reins of running football from the Caretaker Committee whose mandate expired last Tuesday.

•Nyamweya welcomed the move by the CS saying she meant well for Kenyan football.

•Nyamweya urged to Fifa to look at the bigger picture and help save the game instead of it's continued hard stance against the action by the CS. 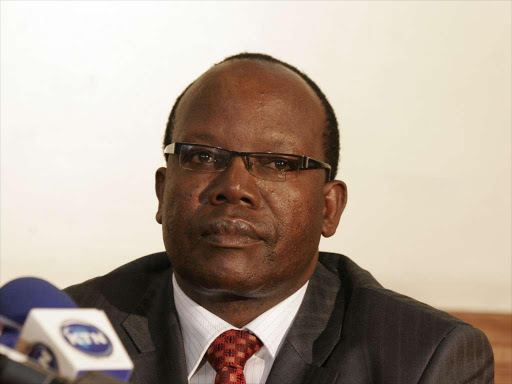 The government and the world football governing body, Fifa, should sit and talk to save Kenyan football, former Football Kenya Federation chairman Sam Nyamweya has said.

Nyamweya made the remarks two days after Sports Cabinet Secretary Amina Mohamed named a Transition Committee to take the reins of running football from the Caretaker Committee, whose mandate expired last Tuesday.

“The Minister is on the right path but must move with speed. She means well and has goodwill and we must support her as stakeholders,” Nyamweya said.

“The Transition Committee should quickly transit to a Normalisation Commitee and organise elections as soon as possible,” he observed.

“We remain appreciative to the CS because she has offered leadership both in her ministry and also in our football. But six months down the line, we now have to move to the next level. We have had a Caretaker Committee, which was appointed by the CS and now the Transition Committee, who came into force a few days ago.”

Nyamweya urged Fifa to look at the bigger picture and help save the game instead of its continued hard stance against the action by the CS.

“Over that period, we have been suspended from international football by Fifa due to what they termed as government interference in football activities.

“The action by Fifa was expected, but now the time has come for the world body to take cognisance of the realities on the ground, we must accept the will of the Kenyan stakeholders and respect the rule of law.”

“Fifa must now respect the court ruling which in essence lent credence to the action the CS took last November by sending the then federation officials home," he added.

“The situation as it is currently is so grim. The clubs have lost hope and players losing their livelihoods. We must fix our football as soon as possible."

The decision comes barely two days after the CS received a draft FKF Constitution from the Caretaker Committee whose mandate ended officially on ...
Sports
1 month ago

Gor had written to the Football Kenya Federation Transition Committee's chairman retired judge Aaron Ringera on the eve of the encounter, stating ...
Sports
1 month ago

The Committee said the new document would ensure elections of the FKF officials are conducted in compliance with the Constitution of Kenya, the ...
Sports
1 month ago
by TONY MBALLA
Football
16 May 2022 - 05:00