Imonje tips Homeboyz to prevail over rivals for league title

Homeboyz top the league with 56 points from 29 matches with a point separating them from second-placed Tusker.

•Imonje lauded the team for the spirited fight and competitiveness that has them become a force to reckon with. 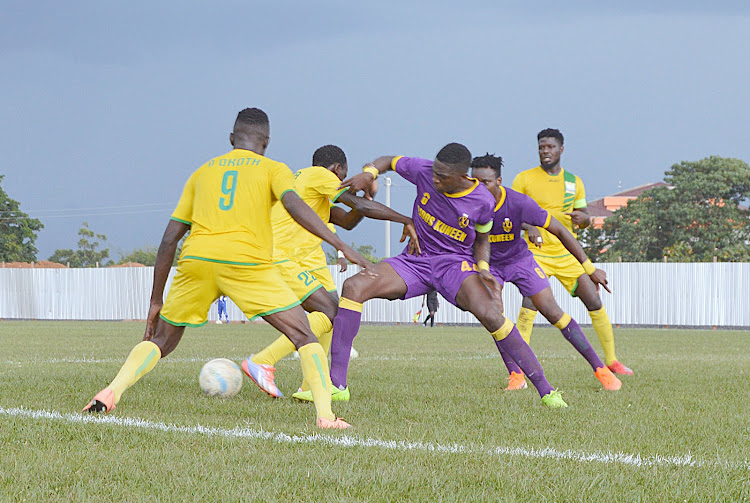 Kakamega Homeboyz players in action in a past match
Image: CALISTUS LUCHETU

Despite squandering an eight-point gap they enjoyed a few weeks ago, former international and veteran coach Alfred Imonje still believes Kakamega Homeboyz have what it takes to seal the Premier League.

Imonje singled out the depth of the team as their biggest strength over their opponents in the race for the title hots up.

"The management of the club has done excellent work in assembling a well-blended playing unit that enjoys massive quality.

"All along, Kakamega Homeboyz have exhibited great soccer and proved themselves as one of the top contenders in the league. All they need is to maintain the fighting spirit and embrace teamwork in the remaining matches," said Imonje.

He added: "During this stage when the league is at the home stretch, it normally gets tough because each team is fighting for points."

He said coach Benard Mwalala has the experience to steer the team to the glory. " However, to realize his dream, he will have to consider rotating his players in the remaining matches to enhance freshness in the team," he added.

Imonje lauded the team for the spirited fight and competitiveness that has them become a force to reckon with.

Kakamega Homeboyz top the league with 56 points from 29 matches with a point separating them from second-placed Tusker.

Homeboyz dare Tusker in KPL round 29

Homeboyz may, however, have to do without their first choice custodian Geoffrey Oputi who is mourning his father, Simon Oputi, who passed away on ...
Sports
2 weeks ago

At Moi Stadium Kasarani, the 94th edition of the Mashemeji derby lived up to its billing with both AFC Leopards and Gor Mahia exhibiting peculiar ...
Sports
1 week ago

Sharks striker Oluoch ruled out for a month

Oluoch, who has already found the back of the net 12 times this season, collected a lateral ankle ligament sprain in their barren draw against record ...
Sports
2 weeks ago
by CALISTUS LUCHETU Correspondent, Kakamega
Football
12 May 2022 - 05:00