Eight years on, the legendary former Reds captain can help shape the outcome of a title race that looks destined to go to the last day.

•Gerrard was part of a Liverpool side who were three games from winning the title in 2014, only for his infamous slip to help Chelsea to victory at Anfield as City ended up finishing top instead.

•Gary Lineker, speaking on Match of the Day, discussed a possible last-day scenario where Gerrard could win the league for Liverpool if Villa earned victory at City. 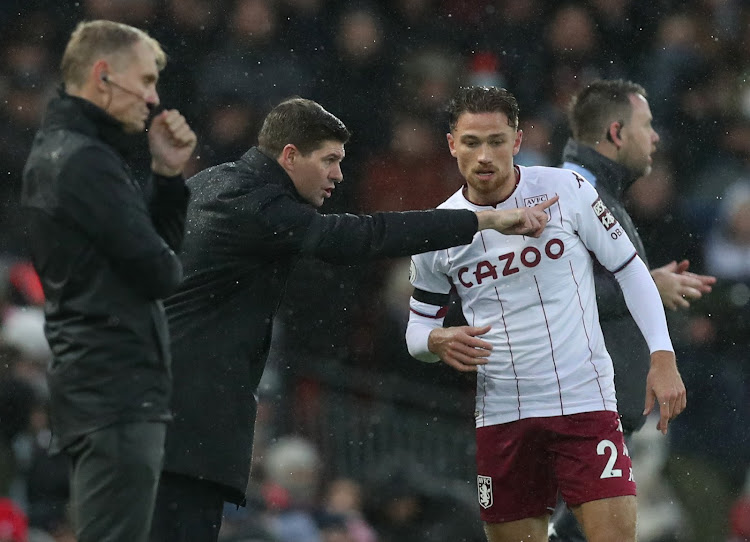 Steven Gerrard has all but steered Aston Villa to Premier League safety— and now could have a decisive say at the other end of the table as the title race reaches a thrilling conclusion.

Two of Villa’s final four games are against the top two, starting with the visit to his former club Liverpool, who are chasing a historic quadruple (tonight), before taking his side to leaders Manchester City on May 22, the final day of the Premier League season.

Gerrard was part of a Liverpool side who were three games from winning the title in 2014, only for his infamous slip to help Chelsea to victory at Anfield as City ended up finishing top instead.

Eight years on, the legendary former Reds captain can help shape the outcome of a title race that looks destined to go to the last day.

City lead nearest rivals Liverpool — the club with which Gerrard won the Champions League, FA Cup, Uefa Cup and League Cup, and for whom he scored 186 goals in 710 appearances— by three points with three matches to play.

Gary Lineker, speaking on Match of the Day, discussed a possible last-day scenario where Gerrard could win the league for Liverpool if Villa earned victory at City.

“He might run on when someone’s through with the ball and tackle,” Lineker joked. “We’ll see; it’s very exciting.”

Ex-Liverpool keeper David James told BBC Radio 5 Live Breakfast on Monday: “If Pep Guardiola gets to the last game of the season three points ahead, then Stevie G could do Liverpool a massive favour. It’s still not over.”

Gerrard made it clear he was uninterested in a sentimental return to Anfield when Villa lost 1-0 at Liverpool in his fifth match in charge, back in December.

He is equally dismissive of talk surrounding the role Villa could play at the top of the table, insisting his focus is on getting as many points as possible “to finish in a place where we can be satisfied”.

“My job is to win games for Aston Villa and that will always be the case while I’m representing this club,” Gerrard said on Monday.

He took charge last November when Villa were just two points above the relegation zone. But they are eyeing a top-10 finish after 10 wins from Gerrard’s first 23 league games in charge, and they start against the Reds in the 11th spot.

“They’re [Liverpool] a world-class team. Arguably, the best team in the world right now,” he added.

Gerrard, seen by many Liverpool supporters as Jurgen Klopp’s natural heir, has a job to do as Aston Villa manager. The rest, as far as he is concerned, is a sideshow.

“We’re well aware of the size of the challenge (against Liverpool), but it’s exciting and I’m looking forward to it. I want to win, fiercely, and that is no different on Tuesday,” he said. “In terms of Liverpool, the season is over 38 games and they play Aston Villa twice.”

Both Liverpool and Manchester City know from recent experiences they will have their work cut out to get anything from Villa.

In addition to making life difficult for the Reds at Anfield five months ago, Villa pushed City all the way before losing 2-1 at home to Pep Guardiola’s team.

Busy summer ahead for Gerrard

Only eight clubs have taken more points than Villa since Gerrard’s first game in charge on 20 November.

But he has already expressed frustration that the team has not kicked on enough, and a busy summer looms in terms of changes to the playing squad.

“I don’t think we’re going to be happy or celebrating anything this season because the team, from the beginning of the season to now, has underachieved,” Gerrard added.

“We seem to be taking two or three steps forward and looking really positive and then having a couple of setbacks. That’s the reality of where we are at.”

The arrival of former Liverpool playmaker Coutinho on loan from Barcelona included the option to buy the 29-year-old for £33m and Gerrard made it clear after Saturday’s impressive 3-1 win at Burnley that he wanted to sign the player permanently.

There are noises Villa will be busy in the transfer window once again, with reports Gerrard wants a center-half, midfielder and a forward.

Villa’s billionaire owners Nassef Sawiris and Wes Edens have invested £430m on signings since taking over the club in 2018 and they are set to provide Gerrard with the power to strengthen his squad, with the summer transfer window now set to play a crucial role as the manager reshapes the team. Victories over either Liverpool or Manchester City will only strengthen Gerrard’s hand.