The Dutchman, who had been living with dementia, clinched the league in his only season in charge, stopping Rangers from winning 10 in a row.

•As a manager, he won the Dutch Cup twice with Feyenoord. 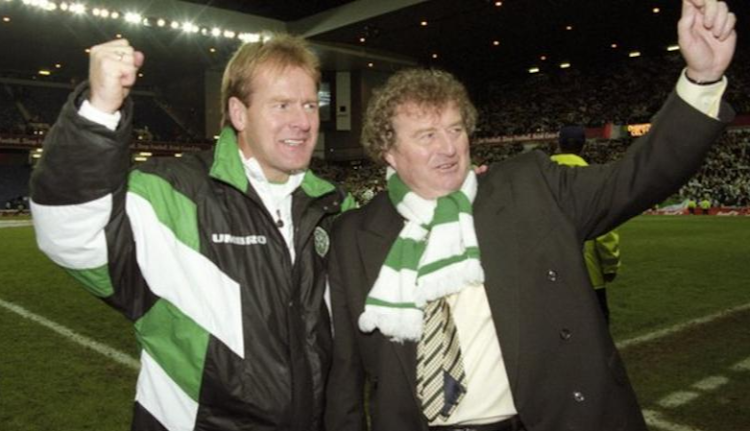 Wim Jansen (right) was assisted by Murdo MacLeod during his one season at Celtic
Image: BBC

Former Celtic manager Wim Jansen, who won the Scottish title with the club in 1998, has died at the age of 75.

The Dutchman, who had been living with dementia, clinched the league in his only season in charge, stopping Rangers from winning 10 in a row.

He made over 500 appearances for Feyenoord, including the 1970 European Cup final win over Celtic in Milan, and managed the Rotterdam team.

When Celtic stopped Rangers' 10-in-a-row title bid"I've often said that for all of us, we get the privilege of coming through these clubs and I guess our ultimate ambition is to leave some sort of mark or some sort of legacy and he did that in 12 months," said Celtic manager Ange Postecoglou.

"The impact he had in just one year at this football club is fantastic. Similar journey to mine from Japan to here, way back then. He's left an indelible mark."

As a manager, he won the Dutch Cup twice with Feyenoord.

His old club paid tribute to "a wonderful person and great Feyenoord player".

The title was clinched by a two-point margin thanks to a final day win at home to St Johnstone, but he resigned almost immediately and was later replaced by Jozef Venglos.

Reo was key in Celtic’s controlled display and Postecoglou believes there is more to come from his new signing.
Sports
3 months ago

The floating farm therefore aims to keep its cows' feet dry by being sustainable, floating.
News
8 months ago
by BBC
Football
25 January 2022 - 17:51