•In the third minute of extra time, Shikangwa sent the goalkeeper the wrong way from the penalty spot after Wanyonyi was brought down.

•In the third place playoff, Specer Nacakwa and Fazila Ikwaput were enough for Uganda's lady Doves to win bronze. 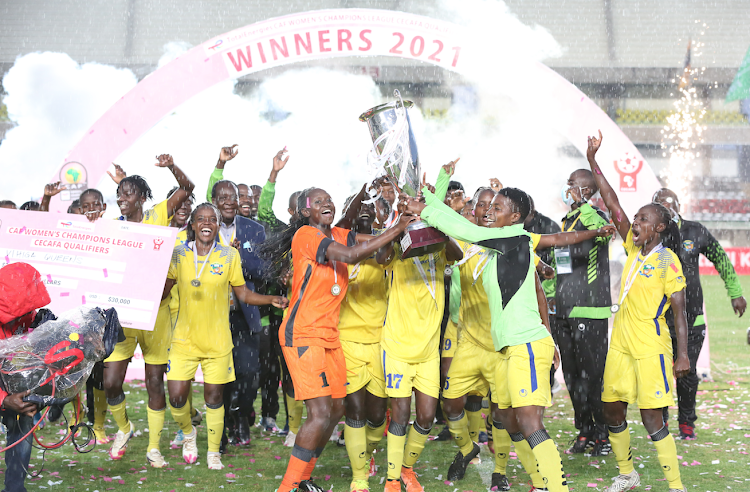 Vihiga Queens coach Boniface Nyamunyamu was over the moon after his charges outwitted Commercial Bank of Ethiopia to seal a place in the finals of the Caf Women's League at Moi Stadium, Kasarani on Thursday.

Speaking after the match, Nyamunyamu, visibly elated with the feat, said their priceless 2-1 over their opponents was deserving as they showed the desire and hunger to be crowned champions.

A brace from striker Jentrix Shikangwa was all the Vihiga County- sponsored team needed to overcome their tough opposition to secure the sole slot for the region in the competition proper later in the year.

Nyamunyamu said the team will sign new players ahead of the tournament in order to address the problematic areas. "From the start, the intention was to win. Everybody was in high spirits and you could see it. It would have been tough to lose twice against the same opposition," said the interim tactician.

"We were strategic in our approach and this win is deserving. I believe roping in new players will help the squad to become more complete and competitive."

Jentrix Shikangwa gave Vihiga the opener in the 28th minute after Bulcha parried Wanyonyi's shot straight into her path for the 20-year-old to tap in. CBE's effort to equalise were thwarted by Queens' resolute defending as Vihiga took their slim lead into half-time.

Seven minutes into the second half, CBE equalised after a defensive mix-up left defender Vivian Makokha turning the ball into her own net. Bogale Boyzo paved way for Birtukan Ware in the 55th minute as CBE opted for fresh legs.

Vihiga's Maureen Achieng and Shikangwa rattled the crossbar in quick succession as the Kenyan representatives pushed for the winner. In the third minute of extra time, Shikangwa sent the goalkeeper the wrong way from the penalty spot after Wanyonyi was brought down.

Quizzed on whether she was under any sort of pressure while taking the penalty she said, "I am used to taking them so I was just relaxed. We played for the badge and lady luck smiled on us. Shikangwa added:"We fought so hard and everyone wanted nothing short of a win."

"CBE coach could not be reached for comment amidst the heavy downpour witnessed at Kasarani.

An injury to overlapping fullback Alice Muderi forced Nyamunyamu to bring on midfielder Janet Bundi in the 14th minute as CBE began to dictate the match with midfielder Boyzo at the heart of proceedings.

In the third place playoff, Specer Nacakwa and Fazila Ikwaput were enough for Uganda's lady Doves to win bronze.

Doves won 2-1 with Asha Djafari goal for Simba Queens  a consolation. Loza Geinore won the golden boot after finding the back of the net 13 times.