The pilgrimage that changed one football obsessive’s life

Few, however, have enjoyed a footballing awakening as a result. Chris Pidgeon did.

• The 41-year-old fell madly in love with a club that was then playing in the country’s third tier and has since dedicated a huge chunk of his life to following them.

• In 2019, Pidgeon realised his dream of joining a Ponferradina promotion party, travelling via Copenhagen to be present as his beloved side returned to the second tier through the play-offs. 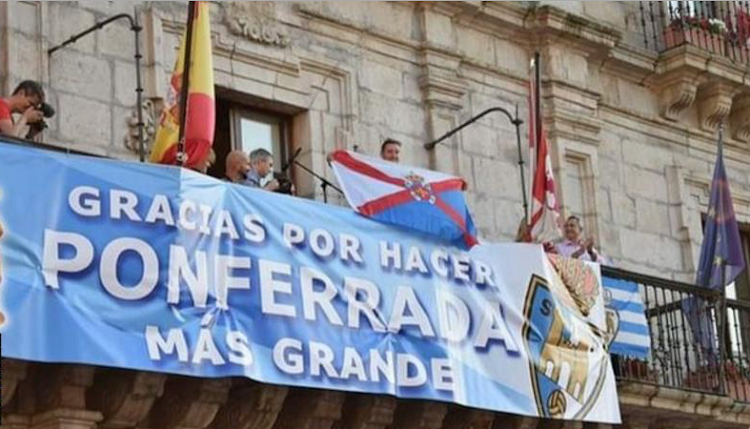 Pilgrims have walked the Camino de Santiago since the ninth century, for most a spiritual journey leading to the tomb of St James in the city of Compostela in north-west Spain.

Few, however, have enjoyed a footballing awakening as a result. Chris Pidgeon did.

The 41-year-old fell madly in love with a club that was then playing in the country’s third tier and has since dedicated a huge chunk of his life to following them.

There is a sense of satisfying symmetry for Pidgeon that, as a Newcastle fan spending three weeks trekking the Way of St James, a hike that began in St Jean-Pied-du-Port in France climaxed not in Compostela but at a football stadium on the route’s penultimate major stop, Ponferrada, home to Ponferradina.

“I left part of me there and I’ve kept going back to find it ever since,” Pidgeon tells BBC Sport.

He has become something of an unofficial mascot for the club, moving to the city, celebrating promotion to the second tier with players on the town hall balcony, building a Ponferradina museum in his home that boasts almost 3,000 items and even appearing on Iranian TV in recent months.

“I am completely obsessed,” admits the father of two, who has now relocated back to York with his family. “I have always been drawn to football but I saw the stadium in Ponferrada and it just had an effect on me, almost unexplained - a lot of people have spiritual experiences doing that Camino walk, perhaps mine was a calling to El Toralin?

“I got chills, it was spine-tingling — a massive part of my heart is and forever will be in El Bierzo.”

That was a decade ago and led to Pidgeon moving in 2014 to a city that nestles among the Aquilianos mountains - he spent the first of his two years there cycling to each of Ponferradina’s 42 league games and clocking up 19,000km on his bike.

“At the end of that year, my youngest daughter was born,” he explains. “I was in Santander when my wife went into labour, so I had to dash back to be at the birth and the following weekend we had a chance of promotion, so it really was a dream few days.

“When I tell people I moved to Spain, they say ‘was it for the sun and sea?’. But no, it’s cold and mountainous. There are a couple of rivers there and a Templars castle from the 12th century. It is just a fairytale place.

“I saw beauty in every corner. I love walks in the mountains, meeting the pilgrims who would pass through the city. I completely love the place, the people, the warmth, the food. Now, with my daughter being born there, I have that permanent connection to the people. It is an extended family.”

In 2019, Pidgeon realised his dream of joining a Ponferradina promotion party, travelling via Copenhagen to be present as his beloved side returned to the second tier through the play-offs.

That trip began with him being invited into the changing room, enjoying a stint on the radio and being treated like a celebrity by fans wanting a picture with him in the city. It continued to escalate from there.

“I was invited to meet the mayor of the city in the town hall and the media asked me to speak in front of 6,000 supporters - the players started singing ‘Chris is on Fire!’. It was a completely amazing experience,” he recalls.

“I couldn’t believe it, I still pinch myself. Other than my children’s births it is the best weekend of my life by a huge distance.”

As a socio and season-ticker holder, Pidgeon returns between 10 and 14 times a season to watch Ponferradina, though he has not been able to travel since before the Covid pandemic.

His last outing was at Tenerife in March 2020, spending the night outside the airport on the island before the players bought him coffee and sandwiches on their arrival. But he is set to make his return for the match against Real Valladolid in October as Ponferradina, who sit third after four games, push for promotion to La Liga for the first time in what is their 100th anniversary season.

“If you want an atmosphere like the German Bundesliga, you’re not going to find it in the Spanish Segunda,” he says. “But it is beautiful in its own way - the passion is exactly the same, the people love their club the same as any supporter and it doesn’t matter if you have five people singing together or 50,000, the feeling of being part of that is equal.

“For me, there is no place I would rather be than on the Fondo Norte at El Toralin stadium singing with my friends.”