Among the youngsters handed a maiden call-up was 20-year-old midfielder Richard Odada who plies his trade in the Serbian top tier for Red Star Belgrade.

•The Kenyan lads could fire themselves back into contention as they come up against Amavubi Stars, who had a torrid start to their campaign following a 1-0 defeat to Mali in Bamako on Wednesday.

•Stars are already in Rwanda for the tie, their plane having touched down at Kigali International Airport on Thursday night, barely hours after the Uganda match. 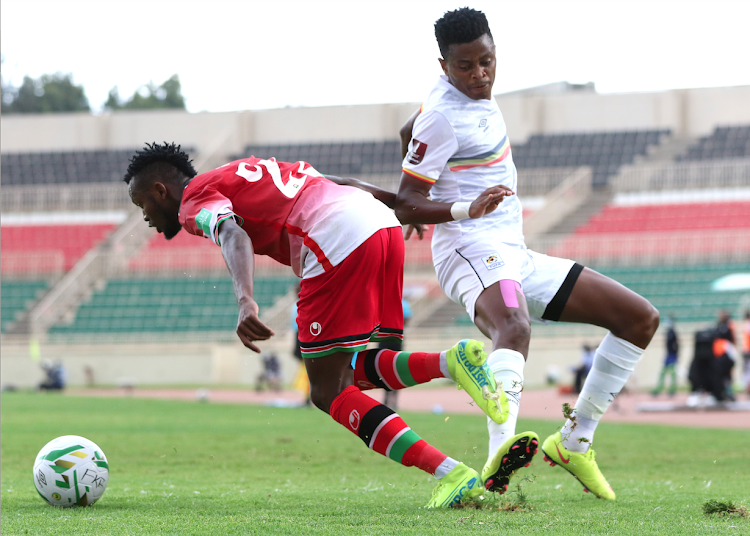 Amidst heightened preparations ahead of the next 2022 FIFA World Cup qualifier against Rwanda, Harambee Stars head coach Jacob "Ghost" Mulee has defended his decision to exclude  former skipper Victor Wanyama from his current squad.

Mulee asserted that the Impact Montreal man has already served his term and Kenyans should exercise patience as he embarks on a rigorous process to mold a competitive squad that will fly the country's flag in the future.

"It's high time Kenyans stopped asking me about the whereabouts of Victor. Michael Olunga is officially the new Harambee Stars captain and that's how things will remain until we specify otherwise,"  Mulee said.

He added: "You must have realised I picked a mixture of budding and experienced crop of players. My prayer is that the team will be able to gel fast enough for future tasks and especially by Sunday when we ultimately tackle Rwanda."

Odada sent tongues wagging with his sublime techniques at Nyayo Stadium on Thursday where he constantly proved to be a thorn in the flesh of the Cranes.

His plea notwithstanding, Mulee is well aware the only way he can deflect the nagging question and possibly appease  listless Kenyan football fans is by claiming Rwanda's scalp in Kigali on Sunday.

Until he does so, Wanyama's ghost might continue to haunt him for a while as he increasingly takes the flak for Stars' lackadaisical performance from irate fans casting aspersions on his selection methods.

Mulee has been busy ducking heavy artillery from hostile fans after his charges failed to impress against an average Ugandan team in their drab barren draw.

A section of disgruntled fans booed him after Thursday's match and even mimicked the characteristic laughter he gives during his morning show on Radio Jambo.

But the Kenyan lads could fire themselves back into contention as they come up against Amavubi Stars who had a torrid start to their campaign following their 1-0 defeat to Mali in Bamako on Wednesday.

The Stars are already in Rwanda for the tie, their plane having touched down at Kigali International Airport on Thursday night barely hours after the Uganda match.

History favors Kenya as they head into Sunday's encounter. In their 18 head-to-head battles, Kenya have claimed the scalp of Rwanda nine times and crashed to them five times. The other four encounters ended in stalemates.

The Stars and the Wasps first locked horns in an international friendly on November 25, 1986 where Rwanda edged Kenya 3-2. They last met in the Cecafa Cup on December 3, 2017 in Nairobi which Kenya won 2-0.

Against Rwanda, Mulee must select his defense meticulously given he will be facing an attack-minded side that boasts of former Gor Mahia lethal and clinical finishers in Meddi Kagere and Jacques Tuyisenge.