Sports CS Amina said at least 2,000 people had received jabs at the conclusion of the exercise.

•Meanwhile, the Ministry of Sports, Culture and Heritage (MOSCH) has moved with speed to assure officials and players left out of the process that they would be given priority once the government receives the next batch of vaccines set to arrive from Denmark in the coming weeks.

•The vaccination exercise was also extended to the national teams preparing for Continental and World championships including Kabaddi, Harambee Starlets, Harambee Stars and Basketball, as well as personnel working on the WRC Safari Rally Kenya. 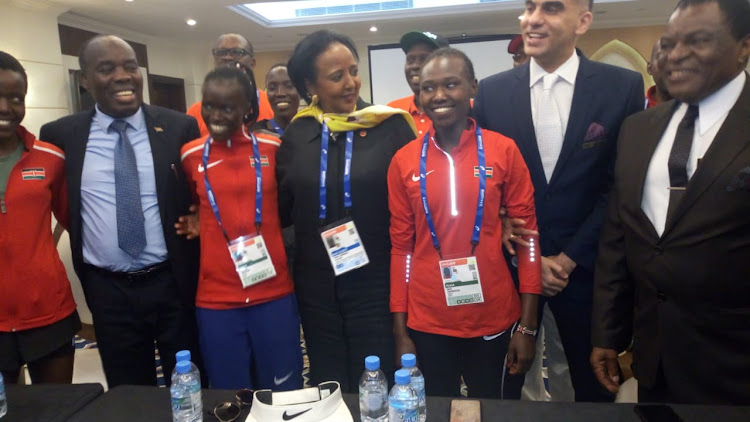 Eleven Nairobi-based Football Kenya Federation Premier League clubs have eventually received their second dose of the Covid-19 vaccine in an exercise conducted at the Moi Stadium, Kasarani Gymnasium in Nairobi and other parts of the country over the weekend.

This comes exactly two months after the clubs were subjected to the first jab on April 8 in an exercise facilitated by FKF in conjunction with the Ministry of Sports and Ministry of Health.

Moneybags, Wazito and newbies Bidco United set the exercise rolling on Friday at 9 am, with defending champions Gor Mahia and Kariobangi Sharks being roped in an hour later.

Next were bankers KCB and bottom-placed Slum Boys, Mathare United, who all got their jabs at 11 am. Nairobi City Stars and Posta Rangers received their second dose at midday before Sofapaka and brewers, Tusker, joined the queue at 1 pm.

13-time champions AFC Leopards brought the curtains down at 2 pm.

In a statement signed by chief executive officer Barry Otieno on Tuesday, FKF had alerted clubs well in advance that the second dose would be limited only to 25 players.

“Regrettably due to an acute shortage of the Covid 19 vaccine, priority will only be given to 25 players who received the first dose of the vaccine,” read the statement in part.

FKF appealed to the government to expedite the process of availing another vaccine.

Meanwhile, the Ministry of Sports, Culture and Heritage (MOSCH) has moved with speed to assure officials and players left out of the process that they would be given priority once the government receives the next batch of vaccines set to arrive from Denmark in the coming weeks.

“I want to assure all athletes who have received their first dose that the Ministry will see to it that they get their second dose as soon as the vaccines are available.” said Sports CS Amina Mohammed in a press statement released on Saturday morning.

The Ministry further stated that the jabs footballers received were actually part of those initially set aside specifically for the Tokyo Olympics-bound Team Kenya and national teams preparing for upcoming international assignments.

“Because there were some extra doses, we extended 600 to top-flight football teams while the rest went to the Olympics-bound teams. We look forward to completing the second dose once the government secures the remaining batch,” said a well placed source at the Ministry.

Sports CS Amina said at least 2,000 people had received jabs at the conclusion of the exercise.

“The Ministry of Sports in collaboration with the Ministry of Health and Nairobi Metropolitan Services has this week vaccinated 2000 athletes, athlete handlers and frontline Ministry officials.

“Others are Rugby 15s and U20 preparing for World Cup Qualifiers and Barthez Cup, Basketball Mena and Women preparing for Afrobasket Tournaments.

The vaccination exercise was also extended to the national teams preparing for Continental and World championships including Kabaddi, Harambee Starlets, Harambee Stars and Basketball, as well as personnel working on the WRC Safari Rally Kenya.

“That figure does not include beneficiaries outside Nairobi, including areas like Mombasa,Uasin and Elgeyo Marakwet where approximately another 200 people received the jab,” the Ministry indicated.

Amina said they would still be rolling out more programs in the future just to ensure all Olympics-bound athletes got inoculated in good time.

Statistics obtained from the Ministry indicate that 5,000 Sports persons and frontline athlete handlers received the first dose at Kasarani in April and another 800 in other parts of the country.

The vaccines, she said, are turning out to be very effective, considering there isn't a single member of the Kenyan national teams who has tested positive in subsequent tests conducted abroad especially after administering the tests.

“We are also encouraged that our athletes, who received the first dose, have tested negative for subsequent COVID-19 tests done within and outside Kenya in the past 30 days,” observed the CS.

Among the Kenyan teams that have traveled do far after receiving the jab are the Kenya Shujaa who played South Africa, Uganda and Zimbabwe at Stellenbosch, South Africa in a 4-team Solidarity Camp hosted by Rugby Africa between May 6 and 16, as well as the Women's Cricket team currently in Kigali.

"There are also teams in Europe and other parts of Africa who have all tested negative in all tests and we are very excited they can now participate effectively in sporting activities here and abroad," noted Amina.

“We remain optimistic that this trend will continue in the run up to the Tokyo 2020 Games, World Cup Qualifiers, WRC Safari Rally Kenya, World Athletics Under 20 Championships and various continental events,” she said.

The CS thanked the Cabinet Secretary for Health, Hon. Mutahi Kagwe and Nairobi Metropolitan Services for availing the vaccines and for their continued support as the teams prepare for the competitions.

“The vaccines were fully provided, facilitated, and administered by the Government,” said Amina.

“We also appreciate the County Governments of Mombasa, Uasin Gishu and Elgeyo Marakwet for their involvement in the vaccination of our athletes based outside Nairobi County,” she concluded.