•United, who have now gone 22 league away games unbeaten— including 14 wins— stunned City with a fast start and were ahead after a penalty was awarded inside the first 30 seconds

•Solskjaer’s team, who had not scored in their previous three games, moved back into second place, a point ahead of Leicester City in the increasingly tight fight for a place in the top four. 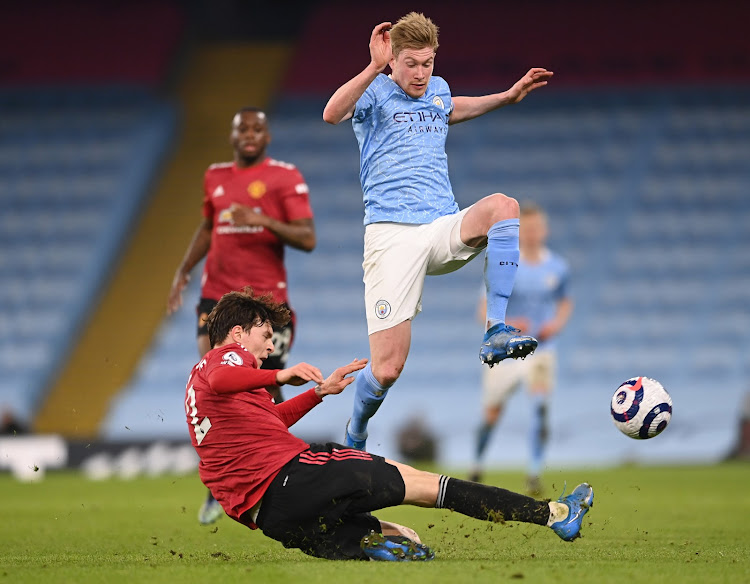 Manager Ole Gunnar Solskjaer says Manchester United are not thinking about chasing down Manchester City despite bringing the Premier League leaders’ sequence of 21 successive victories to a crashing halt with an impressive derby victory at Etihad Stadium.

Pep Guardiola’s side still have what looks to be an unassailable 11-point lead at the top of the table, but the manner in which United subdued a previously unstoppable City and enhanced their own top-four chances will be a huge confidence boost to Solskjaer and his players.

United, who have now gone 22 league away games unbeaten— including 14 wins— stunned City with a fast start and were ahead after a penalty was awarded inside the first 30 seconds when Gabriel Jesus fouled the impressive Antony Martial.

Bruno Fernandes scored from the spot despite City keeper Ederson getting a strong hand on the ball, then United fashioned the win with a mixture of solid defence and constant menace on the break.

Rodri almost equalised just after the break when his shot glanced off the angle of post and bar, but United effectively sealed the win— condemning City to their first loss since a 2-0 defeat at Tottenham on 21 November — when the outstanding Shaw, who had earlier missed a chance to double United’s lead, led a counter-attack, exchanging passes with Marcus Rashford before beating Ederson with a low shot.

Solskjaer’s team, who had not scored in their previous three games, moved back into second place, a point ahead of Leicester City in the increasingly tight fight for a place in the top four.

“They (Manchester City) are so far ahead you can’t really think about anything but making sure we win our games and be better than last year,” Solskjaer told BBC Sport. “We were third so we want to move up the table of course.”

United show their best side

United’s recent performances were greeted with frustration, particularly after they played out unambitious, goal-less stalemates at Chelsea and Crystal Palace.

It cemented the impression that this was a very talented side that had arguably under-achieved this season. This was the other face of United, the one they need to show more often if they are to find the sort of consistency that leads to serious title challenges.

They struck early to grab the initiative, then retained impressive composure and control even as City, inevitably, threatened to work their way back into contention.

And the symbol of what United could be perhaps came in the shape of Anthony Martial, so often inconsistent but outstanding here as they looked a constant threat on the break. Martial missed a couple of second-half opportunities but fully deserved the applause he received from the United bench when he was replaced by Nemanja Matic late on.

Martial was not the only significant contributor. Goalkeeper Dean Henderson looked secure and confident as he kept another clean sheet, pressing his claims to be United’s number one with David de Gea away in Spain after the birth of his daughter.

This, above all, was a tight-knit team effort from United and great credit must go to Solskjaer for another impressive game plan and victory at City.

United did the double over City last season and Solskjaer is the first United manager to win three successive away games against their arch-rivals since a run of four between November 1993 and November 2000. He is also the first manager in United’s history to win his first three away meetings against City in all competitions. All in all, a good day’s work for United and their manager.

City and Guardiola will be bitterly disappointed that it was United who finally brought their winning run to an end, but it is hardly a wound that is likely to prove fatal to their title aspirations.

City had to fall eventually and it came against a United side that seem to have the formula to subdue them at Etihad Stadium. And so it proved once more. City paid the price for a dreadfully sluggish start in which they conceded the penalty and offered up other opportunities which they were fortunate United did not take.

Not even the finest teams can maintain winning streaks forever and this was a day when City could not hit their rhythm, were guilty of over-elaboration in and around the penalty area and their best performers could not hit the heights.

Kevin de Bruyne’s touch deserted him, even if his willingness to demand the ball and determination to influence events did not, while Sterling could not get the better of Wan-Bissaka.

Jesus’ only contribution of significance was to give away the penalty, and it was surprise that when City needed a goal and penalty box skirmishes were increasing, Guardiola chose to leave his master marksman Sergio Aguero on the bench.

This was not City’s day but the bigger picture is still bright as they chase four trophies. One defeat will not derail them from that and it is impossible to see anyone else ending as Premier League champions despite this painful loss to their neighbours.

Manchester City boss Pep Guardiola told BBC Sport: “Congratulations Manchester United first of all. “Ten games left - now we arrive at the important part of the season. The last 10 games are important and we start next Wednesday. We will try to win as many games as possible to be champions.

Manchester United boss Ole Gunnar Solskjaer said: “I’m delighted. We were on the front foot for 10-15 minutes but then the last half hour of the first half we played too much on the result. We had to get to half-time to get hold of everyone again.

“The second goal was magnificent. Luke just showed what he is about. He was a massive doubt this morning and had to go through a fitness test to play. What a performance.

“We defended really well. We were more like ourselves with the ball attacking-wise.

“Anthony Martial was man of the match and he was an even bigger doubt than Luke. That was the Anthony we know - strong, positive and taking players on. I’m delighted for him.”

City’s run comes to an end - the stats

Manchester City were beaten for the first time since November 2020 (2-0 by Tottenham), ending a run of 28 games without defeat across all competitions.

Among managers Pep Guardiola has faced more than three times across all competitions as a top-flight boss, Ole Gunnar Solskjaer is the only one to have won (four) more often than he has lost (three).

Since the start of the 2019-20 season, three of City’s five home defeats in all competitions have come against United.

United are unbeaten in their past 103 Premier League games when leading at half-time (W91 D12).

Marcus Rashford’s assist for United’s second goal was his 10th in all competitions this season - the first time he has reached double figures. Since his Premier League debut in February 2020, United’s Bruno Fernandes has scored 12 of his 13 penalties.

City are back in league action against Southampton on Wednesday (18:00 GMT) before travelling to Fulham on Saturday (20:00).