Nyakeya keen to jet out as Egyptian league nears restart

Nyakeya was among the lucky few Kenyan internationals who managed to jet back home after coronavirus grounded sporting activities around the globe early in the year.

•The former Gor Mahia youth player, who joined the club in July last year on a three-year deal, revealed that his employers are hoping to launch training on Friday. 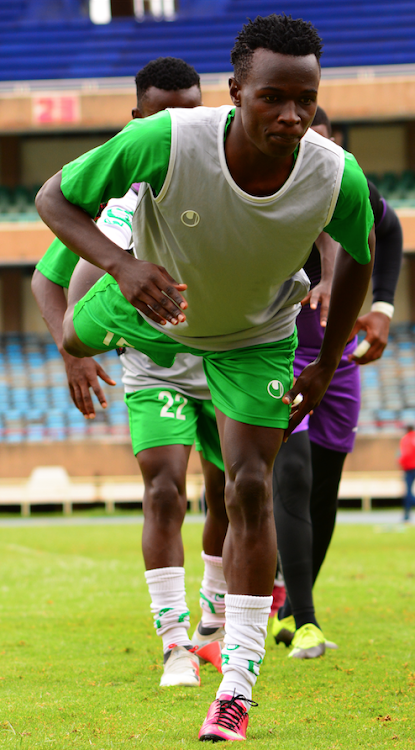 Despite the current ban on international flights, Harambee Stars attacking midfielder Cliff Nyakeya is looking forward to join his teammates at the newly promoted Egyptian side FC Masr in the course of the week.

Nyakeya was among the lucky few Kenyan internationals who managed to jet back home after coronavirus grounded sporting activities around the globe early in the year.

The Egyptian federation has given clubs the green light to resume training on tomorrow  in readiness for the remaining duration of the 2019-2020 season.

The former Gor Mahia youth player, who joined the club in July last year on a three-year deal, revealed that his employers are hoping to launch training on Friday.

The midfielder, who is trapped back at home in Nyamira County, said the club had enquired of the travel restrictions in the country and coronavirus situation but did not hint on any solutions at the moment .

"The club is keen to start training this Friday and hopefully, I will join them this week or next week. They are aware that the Kenyan airspace is locked but at the same time, we hope to explore the available options. The coach insists that I am in his plans but I am not sure if they will send a chartered plane," he said.

The award-winning player disclosed that he may consider connecting through Tanzania who opened their airspace last month should he fail to get a local flight.

The duo of Francis Kahata and Faruk Shikalo who ply their trade in the Tanzanian league were allowed to rejoin their clubs in the course of the month despite the borders being closed.

In the meantime, Nyakeya narrated about his tribulations at the Kenyatta University quarantine facility after jetting back early last month.

The former Mathare United star revealed that he had given up on traveling home after the league was adjourned but capitalised on the availability of an Egyptian plane dispatched to ferry their nationals to Cairo.

He said after touching down, he was forced to head to the mandatory quarantine imposed on passengers from abroad and was lucky to be declared virus free hence was allowed to leave after parting with Sh47,000 in quarantine fee.

"I was lucky to get a plane which had been sent to fetch Egyptians back home. After arriving, I was ushered to quarantine at KU where I stayed for two weeks and after tests and paying the required fee, I was cleared to leave. I was over the moon after reuniting with my family," he added.