"I particularly want to thank EAndiego for tirelessly prodding me on and always moving swiftly to reassure me that all will be well in the ring,"— Akinyi.

•Both Akinyi and Ajowi had missed out on direct berths during the African qualifiers in Senegal but went on to secure slots months based on rankings from previous tournaments. 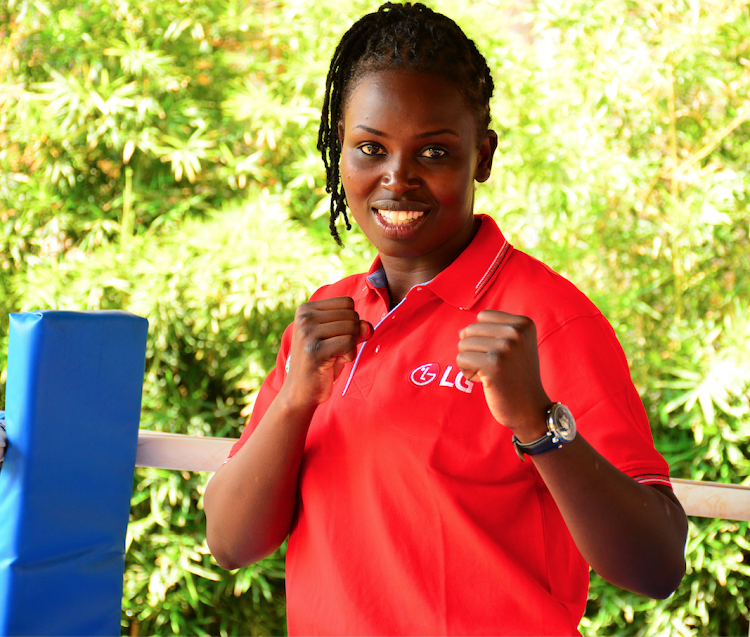 Hit squad welterweight pugilist, Elizabeth Akinyi, has urged Kenyans to keep the team in constant prayers as they charge for a medal haul at the 2020 Tokyo Olympics.

"We have prepared adequately for the Games. I'm both mentally and physically prepared but at the end of the day, we also need prayers to protect us from unforeseen eventualities," said Akinyi.

Popularly known in the ring as 'Black Currant' owing to her glossy ebony complexion, Akinyi has vowed to leave a lasting impression at the games on her debut. She is set to step in the ring between July 24 and August 8 at the Ryógoku Kokugikan.

"I'm not afraid of my opponents at all. Our sparring partners pushed us to the desired level that can make us easily absorb the pressure in the ring, and square up to our opponents with confidence.

"I particularly want to thank Elizabeth Andiego for tirelessly prodding me on and always moving swiftly to reassure me that all will be well in the ring," said Akinyi.

Standing at 5'6 and weighing 69 kgs, Akinyi says she has healed fully from the nasty scratch she suffered in her gums as she took on the opponent during the Konstatin Korotkov Memorial Boxing invitational tournament in Russia.

"Right now, there is nothing that can impede me from giving my best shot in the ring. My entire body is in good shape and the wound I incurred in Russia has since healed," she said.

Both Akinyi and Ajowi had missed out on direct berths during the African qualifiers in Senegal but went on to secure slots months based on rankings from previous tournaments.

She experienced cumbersome moments in the ring at the Africa Zone 3 Championship in Kinshasa Congo due to ample weight. She, however, says he has worked around the clock to shed off some grams as she seeks to make her feet lighter to speed up her motion in the ring.

"I noticed I I was far much above the prescribed weight during the Africa Zone 3 Championship and that made it difficult for me to move easily in the ring.

"Immediately I returned from the tournament I made earnest efforts to burn down some kilos and right now I have attained the desired weight heading into the Games," said Akinyi.