Chelimo also revealed that he had not raced since 2019 and the Stanchart Marathon was his first after the break.

• Meanwhile, the 2017 Milano City Marathon champion Sheila Chepkech expressed her excitement towards winning the race saying that her hard work in training had paid off well. 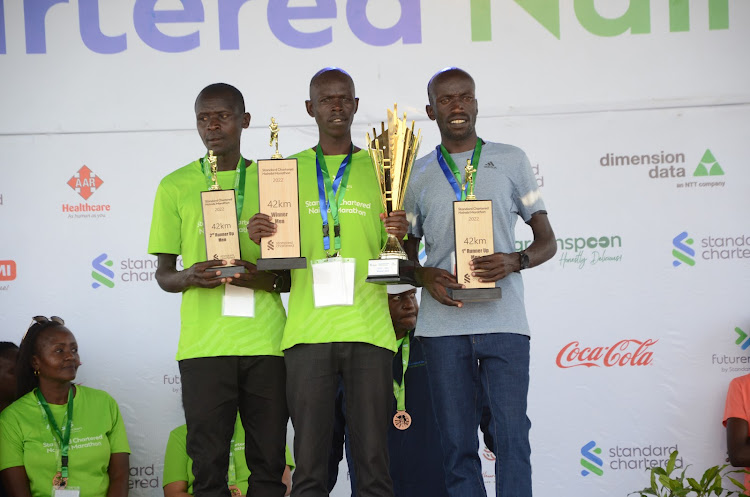 Fresh from winning Sunday's Nairobi Standard Chartered Marathon, Elias Chelimo is not resting on his laurels as he seeks to make his first international appearance at the Honolulu Marathon in Hawaii on December 11.

Chelimo said he hopes his management will ensure he is entered to participate in the race. He also strongly believes the win has opened up doors for him to compete internationally.

“I have never competed internationally and I believe this (win) has opened more opportunities for me. I still have one more race in December where I’m hoping I’ll get a slot at the Honolulu Marathon. I am hoping my management will make arrangements for me to participate. If not, I will just get another race,” Chelimo said.

Chelimo admitted that he never expected to win and was just hoping for a top-five finish. He also revealed that he had not raced since 2019 and the Stanchart Marathon was his first after the break.

Chelimo has participated in three previous editions of the Stanchart Marathon where he placed 31st in 2003, seventh in 2004 and third in 2005.

“My target was to finish among the top five athletes but I am grateful I won. I have not raced since 2019 and it feels good to be back,” he said.

Meanwhile, the 2017 Milano City Marathon champion Sheila Chepkech expressed her excitement after winning the women's race, noting that her hard work in training had paid off well.

Chepkech, who also trains in Iten, won the race in 2:27:04. She also participated at the Eldoret City Marathon in April, where she placed sixth in 2:33:31.

“I have been training since April and I am glad my efforts paid off. This is my last race of the season and I’m hoping next year I will get more opportunities,” she said.

She will be joined by the 2021 HOKA Ravenna City of Art Marathon champion Shyline Jepkorir in a quest for a podium finish.
Sports
3 months ago
Post a comment
by ABIGAEL WAFULA
Athletics
01 November 2022 - 05:00
Read The E-Paper