Kipruto believes he can pull off hot streak in upcoming races

He added that finishing second at the Tokyo Marathon was enough morale for him not to give up the chase.

• In the women’s race, Joyciline Jepkosgei relinquished her title to Ethiopia’s Yalemzerf Yehualaw who won the race in 2:17:26. Jepkosgei placed second in 2:18:07 as another Ethiopian, Alemu Megertu settled for third place in 2:18:32. 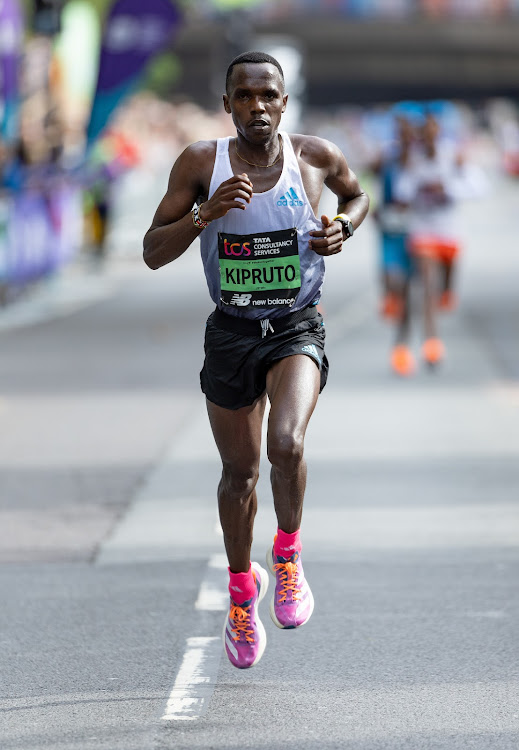 Newly-crowned London Marathon Champion Amos Kipruto is not resting on his laurels as he looks to extend his blistering form on the roads.

“I know I will have a lot of pressure and competitors from now on but I believe in my training. I have the confidence that I will still do well in other competitions. I can confidently say I am ready for anything,” Kipruto said.

Kipruto was Kenya’s sole representative in the men's race and observed that there was a lot of pressure to perform.

“Being the only Kenyan in the race was really hard for me but I managed. There was a lot of pressure and my fans were also watching me. I had to fight for a podium finish and I thank God I placed first,” Kipruto said.

He said he received immense support from his family, coach and training mates as he was preparing for the race, adding that finishing second at the Tokyo Marathon was enough morale for him not to give up the chase.

“I was well prepared for the race. Placing second at the Tokyo Marathon was a morale booster and it motivated me to keep going. It gave me the confidence to end the season on a high,” he said.

In the women’s race, Joyciline Jepkosgei relinquished her title to Ethiopia’s Yalemzerf Yehualaw, who won in 2:17:26. Jepkosgei placed second in 2:18:07 as another Ethiopian, Alemu Megertu settled for third in 2:18:32.

Other Kenyans in the race were World Marathon silver medallist Judith Korir and the 2016 World Half Marathon bronze medallist Mary Ngugi, who placed fourth and seventh in respective times of 2:18:43 and 2:20:22.

Meanwhile, Eldoret town was full of life after Kipruto’s astonishing run. His win awakened the crowd gathered at the big screen mounted along Eldoret-Uganda Road.

The huge marathon viewership that was sponsored by the county government of Uasin Gishu attracted a large crowd where all four major roads, Oginga Odinga Street, Eldoret-Iten road and Kenya-Uganda highway were closed.

Bii, who took over the top county job from Jackson Mandago, said: “This is a region known for producing top athletes and such events bring together many people. Sports is a unifying factor in everything that we do despite our political differences,” he said.

Tanui expressed optimism that Nandi County, where Kipruto and Jepkosgei hail from, will continue producing top athletes. He said their focus now shifts to the Chicago Marathon on October 9 and the New York City Marathon on November 6.

“As a county, we are on top of the world with a rare talent and our hope is to continue producing top runners. We now await the Chicago and New York marathons,” he said.

The Kenyan destroyed a sensational field to break the tape in 2:04:39.
News
1 month ago

The 2017 Seoul Marathon winner said he feels the pressure ahead of the assignment because he knows his competitors are also training very well.
Sports
2 months ago
Post a comment
by ABIGAEL WAFULA AND EMMANUEL SABUNI
Athletics
03 October 2022 - 05:00
Read The E-Paper