Kandie to run one more road race before switching to track

Kandie said he will run in Valencia Half Marathon on October 23 before transitioning to track next season.

•The 2020 Ras Al Khaimah Half Marathon winner also said he is keen to run at the World Cross Country in Bathurst, Australia next year.

• Kandie said he draws his inspiration from the NOC-K president Paul Tergat who is also his friend. 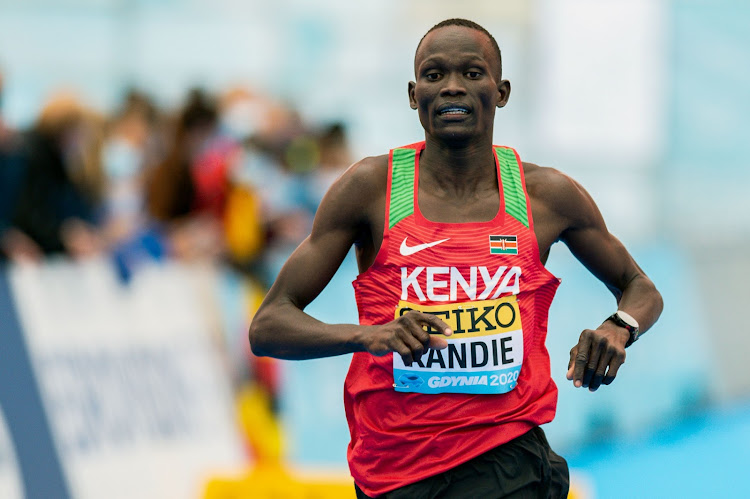 Kibiwott Kandie in a past race
Image: FILE

Kandie said he will run in Valencia Half Marathon on October 23 before transitioning to track next season.

He explained that the reason why he is back on the roads is to lower his personal best time before starting his track season that would culminate in next year's World Championships in Budapest.

In a previous interview, Kandie revealed that he would take an immediate break from roads to focus on track.

The 2020 Ras Al Khaimah Half Marathon winner also said he is keen to run at the World Cross Country in Bathurst, Australia next year.

“My next race is the Valencia Half Marathon. This will be my last half marathon before shifting focus on track,” Kandie said.

Kandie, who was also the 2021 Istanbul Half Marathon winner,  said he is an all-rounded athlete and wants to try out track, road races, and cross country before fully switching to marathon in 2024. He has only competed in one full marathon in New York City,  where he placed ninth.

“I want to explore every field and represent my country in the track, road race, and cross country. My main target is to eventually switch to marathon in 2024 God-willing,” he said.

He noted that his training sessions are going on well and he is in good shape as he awaits the competition.  He said Valencia Half Marathon, he may sign off from the roads with a 10km race at end of the season.

“My manager scheduled this race for me and maybe in November or December, I might have another 10km race,” he said.

Kandie said he draws his inspiration from the NOC-K president Paul Tergat who is also his friend.

“He (Tergat) has been my chief adviser and he always challenged me to try out new things. I want to be like him,” he said.

Sawe won the race by running a national record of 21.250km, missing out on Mo Farah’s world record of 21.330km.
Sports
4 weeks ago

Kandie takes a break from road races to focus on track

Kandie will be among the athletes who will participate in the Brussels Diamond League scheduled for September 2.
Sports
1 month ago
Post a comment
WATCH: The latest videos from the Star
by ABIGAEL WAFULA
Athletics
23 September 2022 - 05:00
Read The E-Paper