Kipyegon disappointed after missingworld record by a whisker

The diminutive Kenyan tracked the pacemakers through the first 900m, by which time she had left the other competitors far in her wake.

• “I have been chasing the time for quite some time but I am happy with the personal best,” she said.

• The world record is the only honour to elude Kipyegon, who has won both the Olympic and world 1500m titles after returning from the birth of her first child in 2019. 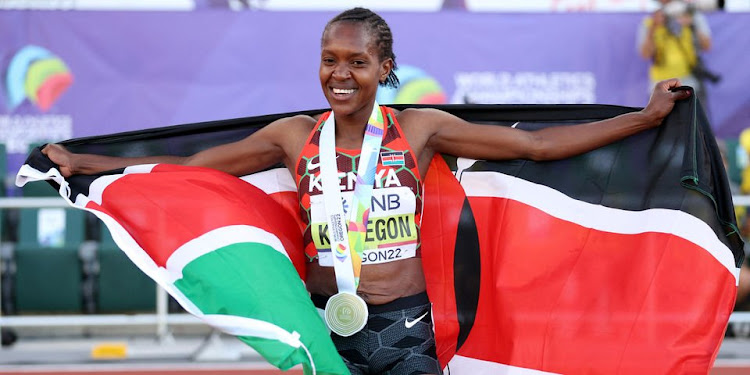 Olympic and world champion Kipyegon broke every 1500m record in the book, except the one she most desired, as she flew around the track in a different race from the rest of the field at the Monaco Diamond League on Wednesday night.

The diminutive Kenyan tracked the pacemakers through the first 900m, by which time she had left the other competitors far in her wake. For the last 600m she had only the pacing lights for company and knew she was within touching distance of Genzebe Dibaba’s 2015 world record of 3:50.07.

When Kipyegon crossed the finish line, she had broken the Kenyan record, the meeting record and her personal best, but had fallen an agonising 0.3 short of the world mark. She remains the second-fastest in history but is getting closer to No.1 with every attempt.

“I have been chasing the time for quite some time but I am happy with the personal best,” she said. “I knew this was the best place to get the world record so I am disappointed I lost it in the last metres.”

The world record is the only honour to elude Kipyegon, who has won both the Olympic and world 1500m titles after returning from the birth of her first child in 2019.

Second-placed Heather MacLean was more than eight seconds behind but still under four minutes (3:58.89), as was her US compatriot Elise Cranny in third (3:59.06).

Meanwhile, world 100m champion Shelly-Ann Fraser-Pryce continued to defy the aging process, setting a world-leading 10.62 to win by a full metre from world 200m champion Shericka Jackson, who set a personal best of 10.71 as she tried to keep pace with her compatriot.

With this performance, Fraser-Pryce became the first woman to break 10.7 six times in one season.

“To be able to run 10.6 consistently means a lot to me,” she said. “It’s remarkable. It is very hard to keep the speed on this high level. I’m in my late thirties and I think I feel like I have more to give. I look forward to doing my personal best (10.60) for the rest of the season.”

Fraser-Pryce also inspired an African record from Marie-Jose Ta Lou (10.72) in third place and an equal personal best of 10.81 from Aleia Hobbs in fourth.

Fraser-Pryce and Faith Kipyegon made a mockery of the theories of a previous age that mothers could not be great athletes.

Elsewhere, world champions also collided in the men’s 200m, where Noah Lyles prevailed over 400m specialist Michael Norman at his specialist distance in 19.45, but could not quite reproduce his breath-taking speed in Oregon (19.31).

Lyles, who broke his own meeting record by 0.2, described his run as “kind of wobbly” and said he hoped to improve at his next start in Lausanne. Exciting teenager Erriyon Knighton (19.84) split the two world champions with Norman third (19.95).

In the third clash of the Oregon titans, 1500m winner Jake Wightman triumphed over 1000m in 2:13.88, to move to No.9 on the world all-time list over the rarely-raced distance.

Canada’s world 800m bronze medallist Marco Arop was the only one to follow the world-record pace, with Wightman 20 metres behind him in no-man’s-land for much of the race.

However, Wightman began to reel in the Canadian with 200 metres to go and passed him 10 metres before the finish line.

Wightman said this was a perfect tune-up for next week’s European Championships in Munich, where he will step down to the 800m and shapes as a serious threat on this evidence.

World champion Shaunae Miller-Uibo also had it all her own way in the 400m (49.28) winning by more than half a second from Candice McLeod (49.87) and Commonwealth Games gold medallist Sada Williams (50.10).

In the men’s 3000m, Burundi’s Thierry Ndikumwenayo produced the most surprising result of the day, overhauling last year’s Diamond League champion Berihu Aregawi in the home straight to win in a world-leading 7:25.93, a nine-second personal best, Diamond League record and national record.

Kenya needs to go back to drawing board after dismal show

Kipyegon hails home fans for inspiring her to Oregon22 feat

Meanwhile Kenya' dominance in the men' s steeplechase continued to suffer as Moroccan Soufiane El Bakkali ran away with the gold medal in 8:25.23.
Sports
2 months ago
Post a comment
WATCH: The latest videos from the Star
by WORLD ATHLETICS
Athletics
12 August 2022 - 00:00
Read The E-Paper