•Wafula is fresh from winning the 3,000m steeplechase in 8:32.09 at the just-concluded  World U-20 Championships national trials last weekend at the Nyayo National Stadium.

•The win earned him a direct ticket to Cali show, where he will be accompanied by Peter Rono, who finished second in 8:33.98. 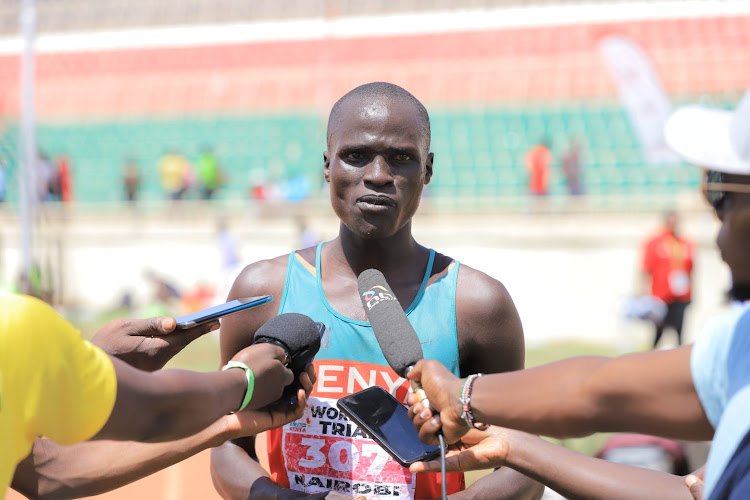 Wanyonyi being interviewed by members of the press after winning the men's 3,000m SC race over the weekend
Image: HANDOUT

Despite not having a manager and quality training equipment in his Mt. Elgon Camp, the latest kid on the blocks in the 3,000m steeplechase, Emmanuel Wafula, is ready to prove a point as he heads to the World Under-20 Championships in Cali, Colombia.

Wafula is fresh from winning the 3,000m steeplechase in 8:32.09 at the just-concluded  World U-20 Championships national trials last weekend at the Nyayo National Stadium.

The win earned him a direct ticket to Cali show, where he will be accompanied by Peter Rono, who finished second in 8:33.98.

Wafula missed out on last year's World Under-20 Championships in Nairobi and wants to capitalise on the situation to rule the Colombia bonanza.

"We only have a local camp that we constructed with my coach. Training from there is a struggle because the camp is situated in a low-altitude area. However, I am hopeful that with time, we shall have a proper facility in a high-altitude area," Wafula said.

"I do not also have a manager but I am optimistic I will get one soon. Last year, I got disqualified and I could not compete in the World Under-20 at Kasarani," he revealed.

The Form 3 student at Chesito High School also acknowledged his coach Rolex Kipchoge's efforts to nurture his talent and his parents, who he described as a great support system.

"I am happy to have Kipchoge as my coach. He not only identified my talent but has also been there to grow my athletics career. He is in charge of my training and I dedicate my achievement during the trials to him. My parents have also guided me and held my hand since I started running in primary school," Wanyonyi said.

Wafula said he wants to emulate the multi-Olympic and world champion Ezekiel Kemboi.

"Kemboi is my role model and has been my motivation. I have been watching his videos and they have helped me to be a better athlete. I want to be like him and hopefully, someday, I will break records," Wafula concluded.

Gati to change tactics ahead of Cali

Despite the bad weather, Gati proved her agility by finishing first in the 10,000m walk race clocking 49:14.8. She vanquished Jacinta Muteu to second ...
Sports
6 months ago

Team Kenya will be out to retain the title they won in August last year following a resplendent performance in Nairobi where they scooped three gold ...
Sports
6 months ago
Post a comment
by ABIGAEL WAFULA
Athletics
07 July 2022 - 05:00
Read The E-Paper