Omanyala's moving narrative reminds one of 2015 world javelin champion, Julius Yego, who broke down a wide array of barriers to steal global headlines. 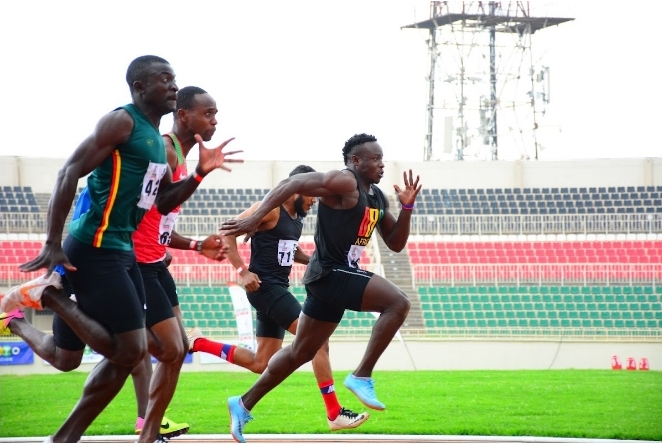 Ferdinand Omanyala leads in a past 100m race
Image: FILE

I am reliably told a good number of women in the country are experiencing sleepless nights over Kenya's newest track sensation Ferdinand Omanyala.

From drooling over newspaper pictures that capture his well-toned body to thronging the stands to watch him live, Omanyala's female secret admirers are finding it difficult to keep their feelings concealed.

One can easily understand their plight. The 26-year-old sprinter — a Bachelor of Science student at the University of Nairobi College of Biological and Physical Sciences — has been the talk of town after dashing to a world-leading time of 9.85 seconds over 100m at the Kip Keino Classic held at Moi Stadium, Kasarani on Saturday.

The showdown could have been more tantalising had Olympic 100m champion Lamont Marcell Jacobs not pulled out on the eve of competition due to illness.

The African 100m record-holder's meteoric rise attests to the dazzling heights local athletes can reach if they are provided with a conducive environment and opportunities for growth and development.

He has singlehandedly managed to deconstruct the myth that Kenya only has the capacity to produce middle and long-distance runners.

Addressing the media moments after his historic exploits on the track, Omanyala said he firmly believes in the country's genius to mould world beaters in the sprints.

"It feels nice...I promised a show and I delivered. We are just beginning the season and we have around three months before the World Championships. This was part of the preparations. All these other guys (sprints giants) are just like us Kenyans...we only just need to tap the talent," Omanyala said.

Omanyala's moving narrative reminds one of 2015 world javelin champion, Julius Yego, who broke down a wide array of barriers to steal global headlines.

Nicknamed "Mr. YouTube" because he learned how to throw by watching YouTube videos of javelin athletes, Yego is the African record and Commonwealth record holder for the event with a personal best of 92.72m.

Both Omanyala and Yego owe their success to sheer hard work. The government and other sponsors definitely have a role in their stardom, though they only came on board after the duo had sprung into self-made fame.

What's important now is for stakeholders in the athletics industry to fathom ways of establishing appropriate grass-roots structures to tap into the vast talent across the country.

Kenya can gain significant traction with the relevant political goodwill. There is an urgent need to formulate long-term policies that will remain in place regardless of the political establishment in place.

However, such noble efforts should not be entirely concentrated on athletics. Other popular sports including football and boxing are also dying for attention.

She has promised to chart the way forward on Thursday once she presents the document to President Uhuru Kenyatta who is expected to give direction.

Cheating puts to test the vow to stick together ‘for better, for worse’
Sasa
7 months ago
Huddah wants to date Ferdinand Omanyala

Africa's fastest man said he had promised to give a show to the fans and delivered on the same with a world lead of 9.85 at Moi Stadium, Kasarani
Sports
2 weeks ago

The third edition of the World Continental Tour has attracted the creme-de-la-creme of athletics and is expected to be electric as participants ...
Sports
2 weeks ago

The Olympic 100m silver medalist is one of this year's headline attractions at the Kip Keino Classic and will come up against Olympic champion Lamont ...
Sports
2 weeks ago
by TONY MBALLA
Athletics
11 May 2022 - 05:00