What is the future of mountain running in Kenya? 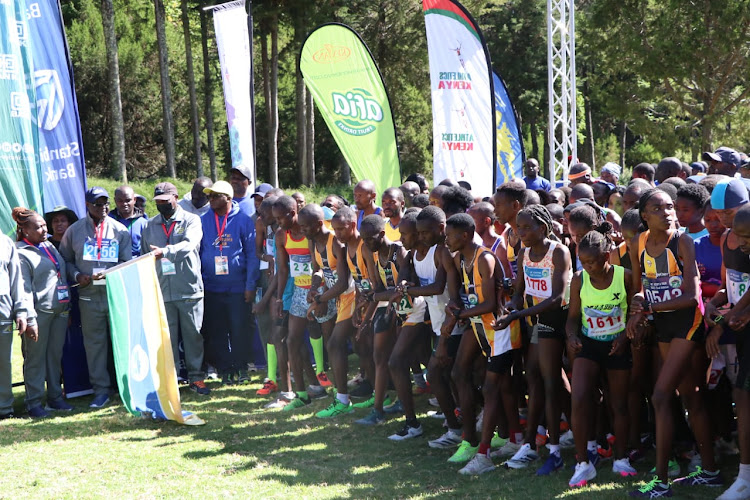 With the plethora of athletics talent in the country — particularly long-distance runners — it is a surprise it took Kenya 25 years after the formalization of mountain running for it to stamp its authority in the sport.

In 2002, World Athletics, then known as the International Association of Athletics Federation, embraced mountain running as an athletics sport.

In 2009, Geoffrey Gikuni Ndung'u put the country on the world map of mountain running when he won the Grossglockner Mountain Run in Austria, defeating then world champion Jonathan Wyatt from New Zealand.

Since then, the likes of two-time world champion Lucy Murigi, World Cup women's champion Joyce Muthoni and Purity Gitonga — who clinched the inaugural edition of the Meru County  Mountain Running Championships — are names that are synonymous with the sport.

The sport is slowly gaining traction in the country as different competitions are held in different counties.

The latest, the second edition of Mount Kenya Championships, attracted hundreds of participants of varied ages and socio-economic backgrounds.

As the curtains came down on the day-long event, the underlying question was: what does the future hold for mountain running in Kenya?

Former Austrian mountain runner Thomas Krejci is one of the pioneers of the sport in the country, having established Run2gether — the first-ever mountain running training camp in Kenya.

He came to the country in 2008 for his personal training and while in Naivasha saw the untapped potential the country has in becoming a powerhouse in mountain running.

Established in 2010, the camp nurtures young talents and facilitates them to compete in various competitions in the country as well as abroad. 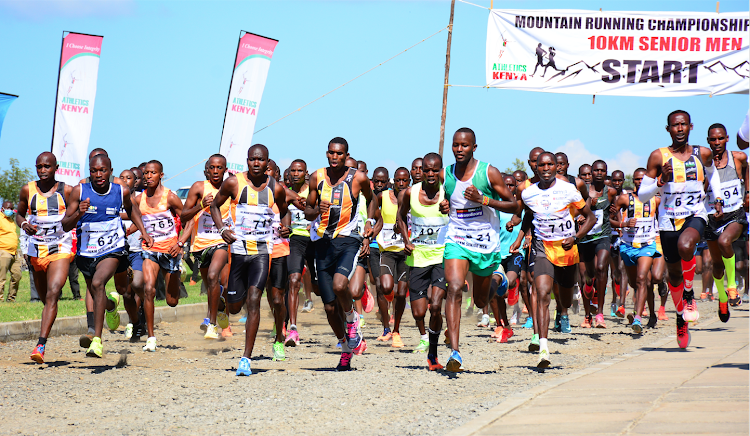 Krejci believes the future of the sport is bright in Kenya,  pointing to the growing popularity on the globe, the suitability of the country's terrain for staging such competition as well as the fact that it is naturally the hotbed of athletics talent.

"Naturally, the area (Naivasha) is quite suitable for mountain running as well as preparing for marathon and track races. It is becoming a popular sport worldwide and the good thing is that you do not need a sophisticated venue to hold such an event. You can organise it in the natural environment whether it is the forest or in the villages," Krejci says.

One of the popular perceptions emerging in the country is that mountain running can be a great alternative for long-distance athletes who fail to excel in track and field or road races.

Krejci is, however, quick to correct this notion, noting that both categories of athletics can complement each other perfectly.

"Mountain running is not for the weak or those who have failed in track or marathon races. A good example is Geoffrey (Ndung'u) who was winning mountain races in Europe while excelling in the marathons as well. You can combine the training for mountain running and marathons until maybe the latter stages where you have to be more specific," he explains.

Krejci adds: "Many of the athletes who I speak to do not take mountain running seriously. They see it as a fun run. We need to have more local competitions for many athletes to understand that this is a serious sport and to increase awareness about it."

Bomet's Patrick Kipng'eno, the winner of the Mount Longonot and Mount Kenya championship, is one athlete who has reaped the benefits of the sport beyond the prize money it offers.

To him, pain is sweet...the blood, sweat, and tears involved in manoeuvring through the treacherous trail that is mountain running has bore fruits for his physique and mentality.

"I had prepared myself well and would love to compete in future competitions. I would love to encourage my fellow athletes to come and join me in this sport. You only need to train hard and

Another elite athlete who has competed in mountain running is World Under 18 2000m steeplechase champion Leonard Bett who tried out his legs at Mount Longonot Championships in Naivasha in November 2020.

Although competing in another mountain running event does not feature in his plans for the immediate future, he says it is something he could consider once he hangs up his spikes.

"In the foreseeable future, I don't think you will see me competing in mountain running because of my busy schedule in track and field as well as marathons. However, it is something I may consider in the future once I am done with my athletics career," the 3000m steeplechase specialist says.

The 1989 London Marathon champion Douglas Wakiihuri says he does not have any regrets about missing out on the opportunity but believes current athletes are perfectly poised to reap from mountain running.

"You could say that mountain running will be suitable for athletes who have not had better fortunes in the track careers. It could be an alternative for those who have left the sport and want to come back. Mountain running is basically about strength, determination, and courage. Speed is not so much a major part of mountain running," Wakiihuri, also chair of the Mount Kenya Championship technical, says.

The next step, stakeholders believe, is for Kenya to bid for a World Mountain Running Association championship or a World Cup stage.

Krejci has been working closely with Athletics Kenya's mountain running sub-committee and says the idea has been discussed at the highest levels.

"I was speaking to Peter Angwenyi (committee chair) on the possibility of Kenya applying to host two World Cup races in 2024. It can be a two-day event over the weekend rather than one day. I feel this would attract a lot of Europeans because mountain running is a very popular sport among them," he proposes.

Krejci adds: "Mountain running is not a popular tradition. We can start with a few small races all over the country. Through this sport, you can put the spotlight on various tourism destinations in Kenya."

Wakiihuri holds the same view, noting that a world or African championship will enhance Kenya's reputation as a sports tourism destination in addition to encouraging as many local athletes as possible to embrace the sport.

"Mountain running is starting to attract attention in Kenya. The next step naturally is for us to bid for an Africa and world championship and to bring as many international athletes as possible here. It would mean a lot for the growth of the sport in the country," the 1990 Auckland Commonwealth Games marathon champion says.

Wakiihuri adds: “My wish is to see more young athletes competing in mountain running. I would also like to see more regions utilizing their mountainous terrains to stage more such events. We already have Mt Longonot and Mt Kenya as well as Nandi Hills.”

Other mountain running championships in the country are slated for Bomet, Kilgoris and Taita Hills.

Internationally, Kenya is to send a team to Chiang Mai, Thailand for the World Mountain and Trail Running Championship on November 18-20 this year.

It remains to be seen whether this optimism will translate into good dividends for Kenya in terms of new talent coming through as well as more medals at the global stage. 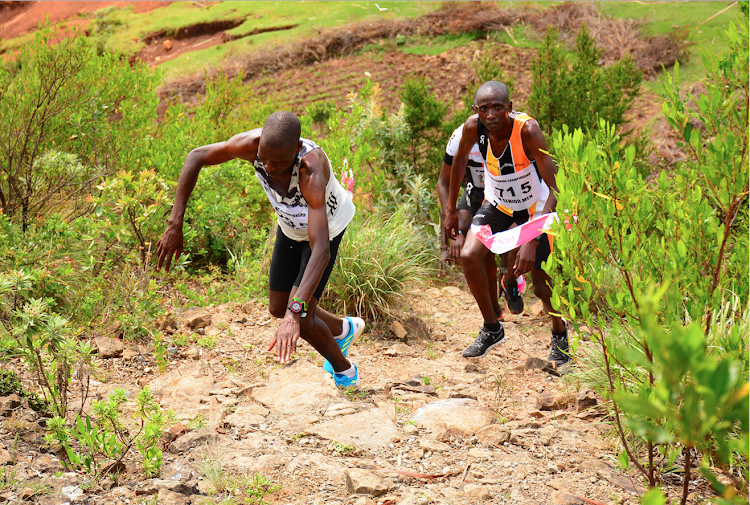 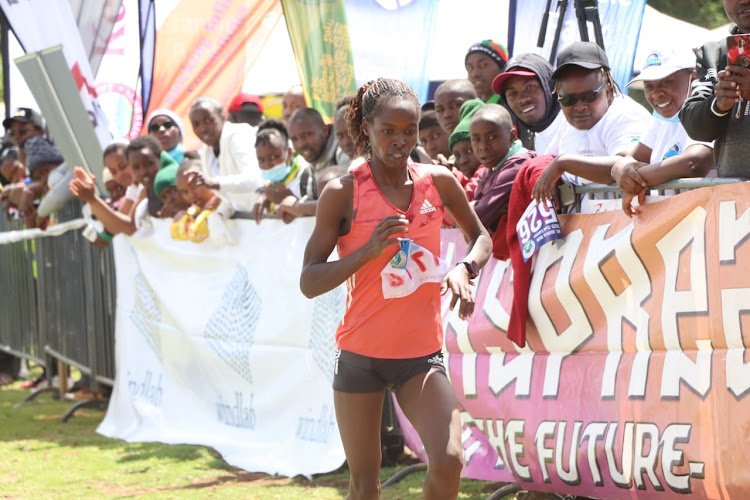 Sheila Jebiwott, winner of the women's 13km elite race on her way to victory at the second edition of Meru Mountain Running Championship
Image: PHEOBE OKALL

The Bomet native, who also won the Mount Longonot championship in 2020, plans to compete in the men's 10,000m at Club Games and World Championship
Sports
11 months ago