SURVIVAL OF THE FITTEST

What awaits athletes at national cross country event in Eldoret 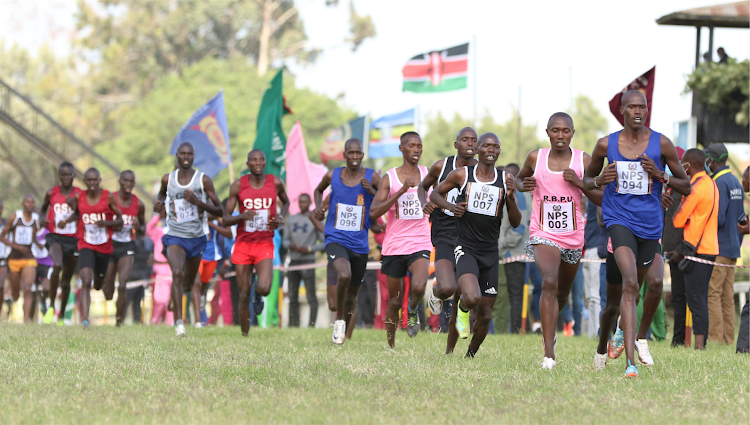 Cross country is no respecter of reputations as far as athletics go. Its unpredictable nature makes it one of the most interesting races to savour as a spectator.

It is a race that never goes according to the script as bigwigs are slain whereas unknown names come to prominence thanks to their exploits on the course.

Considering the entertainment on offer in past editions, many athletics enthusiasts no doubt expect this Saturday's national cross country championships in Eldoret to throw up a few surprises.

The annual competition, to be held at Lobo Village in Kapseret, will be a precursor to the Agnes Tirop Memorial World Cross Country Tour to be held on February 12 at the same venue.

In previous editions, the national championships have been used as trials to select the team to represent Kenya at Africa and World Cross Country Championship.

However, this year's event is purely for pride since the World Cross Country Championships will not be held until next year whereas the fate of the continental event remains unknown.

In spite of these, the stakes are raised high and it is expected that athletes will bring their A-game as they aim to close their cross country season on a winning note. However, Athletics Kenya national head coach Julius Kirwa has warned athletes that this year will be no different as far as the difficulty of the course is concerned.

"The course is ready. We are just winding up our preparations. We cannot wait to receive the athletes. It is not an easy course and will therefore not be a walk in the park for those hoping for a win," Kirwa says.

Woe unto athletes who have not worked on their resistance for they will be in a rough time on the course.

"The course is very muddy and very tough. That is why it is called cross country because the terrain is quite unpredictable, unlike track races — where the field is even. Only those with stamina and endurance will survive," Kirwa says.

That cross country is not for the faint-hearted is a fact not lost to Barcelona Half Marathon champion Sandrafelis Chebet, who will be competing in the women's senior 10km race.

The 24-year old athlete from Lemotit Athletics Camp in Kericho County won the AK South Rift region trials to the national event and admits the race stretched her physical abilities to the bones.

"The course was very muddy and there were a lot of obstacles to negotiate. I had just competed in a road race in Barcelona and hadn't recovered fully. I was quite tired but had to push myself past the finish line," the 2018 Valencia 10km champion, said.

She will be up against a star-studded cast which includes past national champions, including Kenya Prisons Service's Alice Aprot (2016) and North Rift's Irene Cheptai (2017), who is also the 2017 World Cross champion. 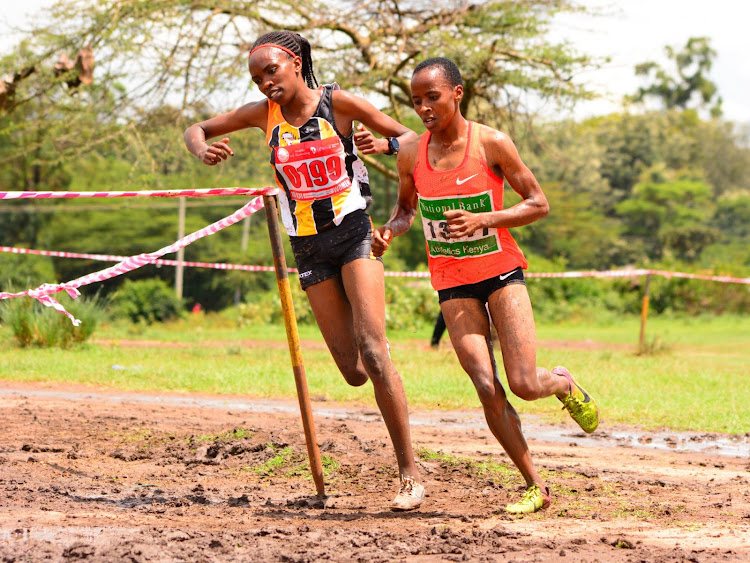 Sandrafelis Chebet (R) and Caroline Gitonga manouvre through the mud during a past Nairobi Region Cross Country championships at the Posta Grounds.
Image: ERICK BARASA

However, Chebet is unperturbed by the magnitude of the task before her and believes she is more than capable of staking a claim to be part of Team Kenya in future assignments.

In fact, the 2018 Cape Elizabeth 10km champion, who holds a personal best of 30:45 over 10km, says she is praying for a tough field so as to bring the best out of her.

"I can't predict what will happen but I just trust in God. I will be in good shape and mentally ready to take on the rest of the participants. My prayer is that everyone will be in peak physical condition so we can push one another because that is the kind of competition we need," she says.

Chebet adds: "My focus is to do well and set myself up for future successes in international championships. I want to make my coach (Paul Kemei) proud so that at least one of his athletes will go on record as having shone at the national level," she explains.

Despite the tough race awaiting his athletes, Kemei believes all of them are prepared to give it their all in pursuit of glory in Kapseret.

The former 10,000m specialist, who runs the Lemotit Athletics Club in Kericho, has been busy building up his girls psychologically and physically ahead of the battle.

"We have trained them on endurance and continue to remind them of the same. However, we have not been engaging in intense training for the past one week. They have been eating well and getting enough sleep so they are not distracted," Kemei explains.

Apart from Chebet, the club will also be represented in the younger categories, including the under 20 6km and under 18 5km. He agrees cross country is unpredictable and is thus hesitant to crown any of his athletes as favourites.

"My athletes are in good form but I still just hope in God for success on Saturday. All the other competitors have trained well and will want to shine. Athletes like Edinah Jebitok and Margaret Chelimo are some of those I expect to put in a good performance on the course," Kemei says.

As a cross country fan, Kemei has witnessed thrilling races in past editions and expects this to be replicated. 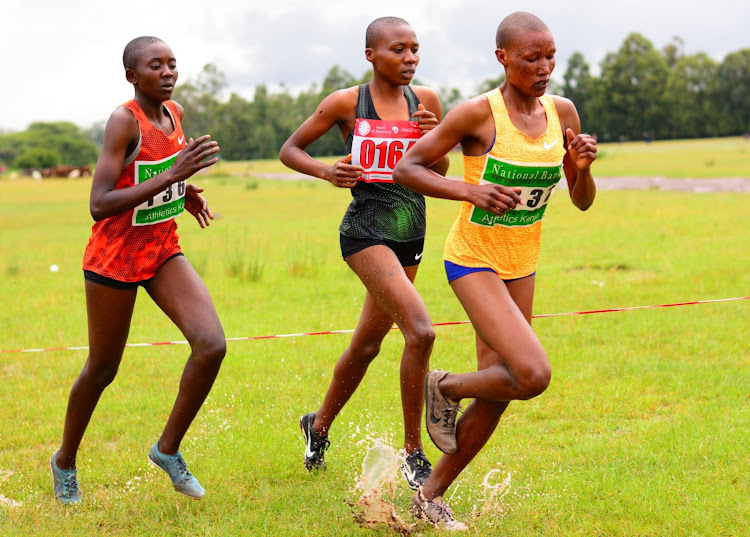 Trizah Cheprotich leads Hilda Chebet and Ann Naasisho in the women's U20 8Km race during a past Nairobi region Cross Country championships at the Posta grounds, Nairobi.
Image: ERICK BARASA

"Last year's cross country race at Ngong' Race Course was the most epic in my opinion. The weather was chilly and rainy whereas the terrain was full of water puddles and mud. Those who were expected to win did not as the newcomers shone," he recalls.

On his part, Kirwa believes the weather will not influence the level of competition.

"It last rained in Eldoret three days ago but now the weather conditions are dry. It is conducive for the runners and will not affect the competition. Running in cross country is important to developing endurance, strength and stamina for athletes. I'd advise them to come prepared," he says.

Indeed, no other is qualified to make such a statement than a man who has moulded many of the country's top athletes for over four decades.

To be forewarned is to be forearmed; Kirwa's words are enough indicator of what all participants should expect in Eldoret on Saturday. It promises to be a thrilling spectacle for spectators but a test of character for all athletes.