Marathoner John Katio eulogised as a diehard athlete to the end

The 2007 Beograd Marathon champion died in a road accident on Limuru Road and will be laid to rest on Friday at his ancestral place in Makueni. 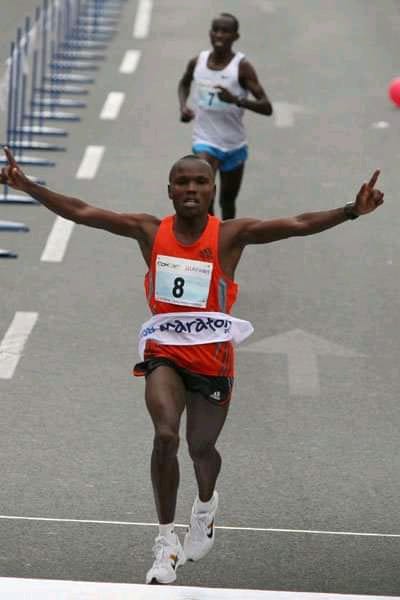 John Katio celebrates in a past race.
Image: HANDOUT

The 2007 Beograd Marathon champion John  Katio, who died in a road accident last week, has been eulogized as an athlete who gave his all to the sport until his last breath.

Athletics Kenya vice president Paul Mutwii said he has fond memories of the 40-year old since his heydays as a runner at Mutanda Primary School.

"He was one of the best athletes at the school level, representing the larger Eastern Province. After completing school, he went on to excel in various marathons worldwide and put Ukambani on the map considering he was a son of this region," Mutwii said.

Mutwii said Katio had big dreams for the growth of athletics in the Eastern region as well as the entire country and had planned on registering his high altitude training camp in Limuru.

"Even after hanging his spikes, he never left athletics but continued to mould the upcoming athletes. That is why he moved to Limuru where he was training young runners in collaboration with another former athlete," he said.

Mutwii added: "His life is a lesson to many other elite athletes. They need to give back to the community by molding other youngsters and passing on their skills and knowledge to them."

According to his younger brother, Benedict Mutina, the 2003 Salzburg Half Marathon champion lost his life after his car collided with an oncoming vehicle from Nairobi along the Nairobi-Nakuru highway.

The seventh-born in a family of 10, Katio came to prominence in 2001 when he won the Amref Safaricom 20-kilometre.

In 2002, he finished third in the Salzburg Half Marathon before returning a year later to reclaim the title. In the same year, he also won the Oloron Half Marathon in South Western France.

Mutina described Katio as a poster boy of determination within family circles owing to his rapid rise in road race circles.

"Immediately after he won the Amref race, he went to Austria and came third despite competing against seasoned runners. We as a family were impressed by his determination to win and take his career to the next level," Mutina said.

He added: "He was a generous and easy-going person who was always willing to share with people whatever he had. He supported me in Form one as well as when I went to college."

Katio, who leaves behind a wife and two children, will be interred at his ancestral home in Mitini area, Makueni County on Friday.