Besides Koln win, his other victories include Breda Singelloop Half Marathon (2005); Lelystad Bedrijvenloop 10km race (2004); and Appingedam Stadsloop 10km (2004).

•Although he has competed in several marathons over the years, Rotich has never represented the country at the international level 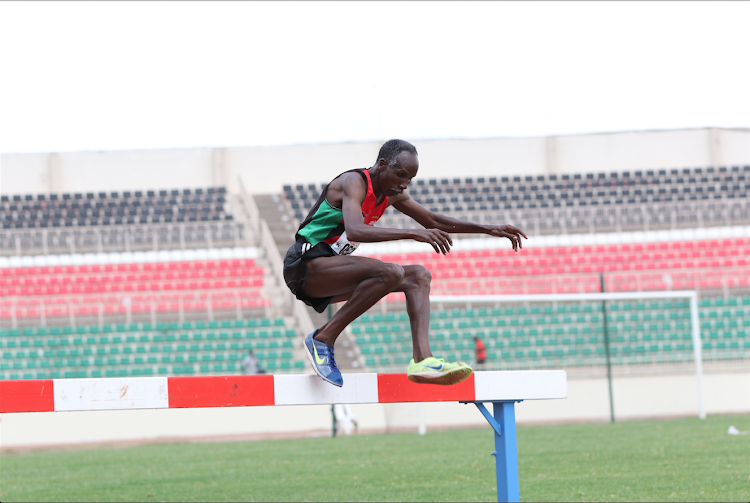 James Rotich jumps over a hurdle during the men's 3000m steeplechase at the national trials for the Open Africa Masters Championships.
Image: ERICK BARASA

The 2004 Koln Marathon champion James Rotich says he has his fingers crossed in the hope that he will be named in Team Kenya for the Open Africa Master Athletics Championships set for November 22-27 in Nairobi.

During the national trials for the Open Africa Masters Athletics Championships, Rotich finished third in the men's 3000m steeplechase in 10:09.09, behind Richard Lagat (9:43.9) and Julius Kiptoo (10:03.1).

Although he has competed in several marathons over the years, Rotich has never represented the country at the international level.

"Of course, I am praying that I will be selected into the team. I have given my best and now it is out of my hands. It will be a pleasure to represent the country for the first time," Rotich, 44, said.

Rotich boasts a colourful athletics CV despite not running in national colours throughout his 18-year career.

Reflecting on his performance on Saturday, during which he gave the younger Lagat and Kiptoo a run for their money, Rotich credited his physically active lifestyle for his third-place finish.

"It is nothing much...just training hard and maintaining self-discipline. It was fun running today although the hot weather really sucked up all my energy," Rotich, who trains in Iten, said.

At the same time, Emily Chepngetich says she is eagerly looking forward to this weekend's second leg of Athletics Kenya Cross Country meeting in Iten, Elgeyo Marakwet after a successful outing at the national trials for the Open Africa Masters Athletics Championships.

"It was a good race considering I have not had the chance to compete for the better part of 2021. I was running to gauge myself ahead of the cross country series and I am satisfied with the levels of my physical condition," the 39-year old said.

She added: "The win was a big boost to me even as I continue training. My speed work has improved so much."