This was confirmed by the local organising commitee Paul Gitau after a courtesy call on Sports Cabinet Secretary Amina Mohammed during which he extended an invite to her.

•The marathon was not held last year due to the coronavirus pandemic, which was ravaging the country and the globe 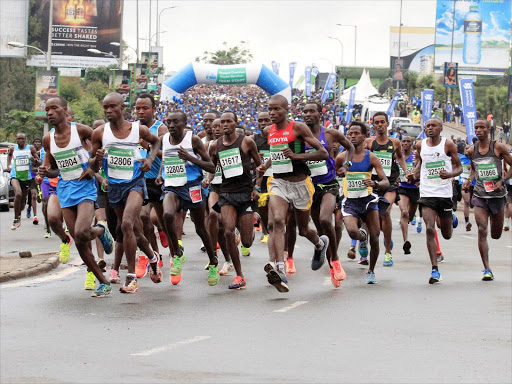 The 18th edition of the Nairobi Standard Chartered Marathon will resume this year on a yet-to-be-announced date after it was postponed last year due to the coronavirus pandemic.

This was confirmed by the Local Organising Committee Paul Gitau after a courtesy call on Sports Cabinet Secretary Amina Mohammed during which he extended an invite to her.

"Since its inception in 2003, the Standard Chartered Nairobi Marathon has grown to become the largest single-day sporting event putting Kenya on the world map. Elite athletes use it as a springboard to launch their international careers. Over 17 editions, the marathon has hosted over 250,000 runners and continues to reinforce its status as a ‘Big City Marathon’," Gitau, also the Standard Chartered Bank CEO, said.

Gitau revealed plans to officially launch the marathon mid this month at the Nairobi Arboretum.  "The SCB Kenya team is keen on ensuring that all Covid protocols are strictly adhered to and has incorporated personnel from the Ministry of Health and the Ministry of Sports as part of their Local Organising Committee. The marathon launch is set to take place mid-July at the Nairobi Arboretum," he said.

He added that they are committed to raising US$50 million in the next two years as part of their long term plan to enhance economic inclusion for young people and reduce inequality.

"In 2019 alone, the marathon had about 17,000 participants across five race categories. The 2019 marathon edition raised over Sh30 million towards the FutureMakers Initiative. The resources put into this initiative have allowed 4,400 girls to undergo life skills and entrepreneurial training," he said.

The five race categories expected to feature at this year's marathon as last year's include: 42km marathon, 21km Half Marathon, 21km wheelchairrace, 10km, and the 5km family fun run.