Kipchoge now focuses on Olympics after comeback win in Twente

In the women's race, German Katharina Steinruck finished first in 2:25:59 ahead of Portuguese Sara Moreira (2:26:42) and fellow countrywoman Rabea Schoneborn (2:27:03) in second and third respectively 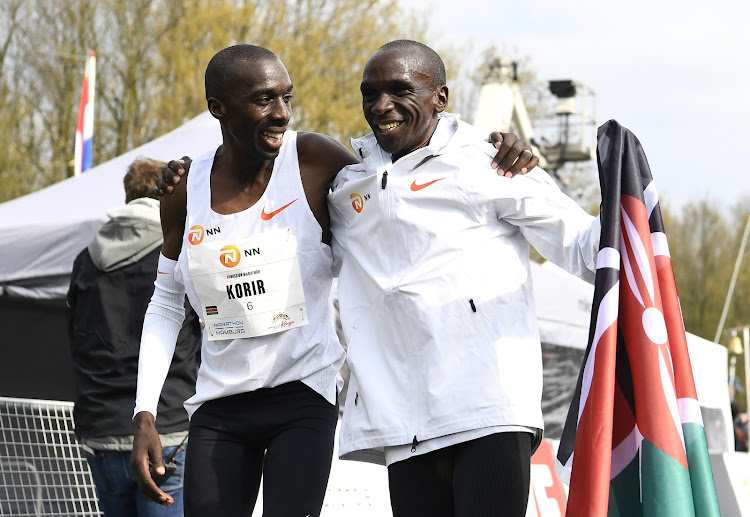 World men's marathon record holder, Eliud Kipchoge has set his sights on a second Olympic gold medal at the Tokyo Olympics after a win at the NN Mission Marathon in Enschede in the Netherlands.

Kipchoge was competing for the first time after a disappointing eighth-place finish at the London Marathon in October last year.

"This was a real test and quite the preparation ahead of Tokyo. The focus is now on the Olympics. I will consult with the coach and technical team to see what next in preparing for Tokyo," Kipchoge said.

The Olympics marathon champion clocked 2:04:30 to finish first ahead of training partner, Jonathan Korir, who timed second in 2:06:40 with Eritrean Goitom Kifle ,  third in 2:08:00.

Kipchoge said he is feeling confident and relieved following the win after ear problems and a hamstring complication denied him a third London Marathon at last year's event in which Ethiopia Shura Kitata clinched first place.

"Yes indeed, it is mission accomplished. For the organisers to hold this event successfully under the current circumstances, it is a great achievement and I  thank them for that. The conditions were good although it was a bit windy. However, there were other athletes who ran under the same condition and so I can't complain too much about that. I do not always want to complain," he said.

Kipchoge is part of the four-man team named by Athletics Kenya to lead the country's charge for a podium finish at the Olympics.

In the women's race, German Katharina Steinruck finished first in 2:25:59  ahead of Portuguese Sara Moreira (2:26:42) and fellow countrywoman Rabea Schoneborn (2:27:03) who finished second and third respectively.

Kenyan Gladys Chesir finished eighth in 2:29:16 after losing ground with the leading pack halfway through the race.

The race was initially scheduled for Hamburg, Germany but was postponed late last month following Covid-19 restrictions in the country.

It featured approximately 100 athletes most of who were hoping to hit the qualifying mark for the Olympics.