• The Bungoma county native joined KCB in December 2021 but left the bankers in April 2022 for greener pastures with the sleuths before joining Kenya Police Training College, Kiganjo.

• The Kesogon high School alumnus believes there's room for improvement even as she looks up to Mercy Moim for inspiration.. 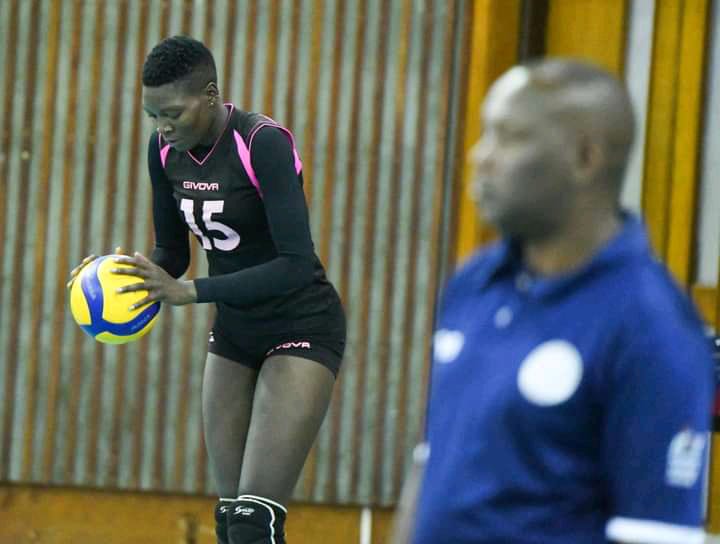 DCI's Sarah Namisi in a past action
Image: /HANDOUT

The Directorate of Criminal Investigation left attacker Sarah Namisi is hop[ing for a call to the national team, Malkia Strikers, after starring at the Kenya Volleyball Federation women's playoffs at Kasarani Indoor Arena last weekend.

The 21-year-old was feted the best attacker after strong displays against their opponents in the four-team championship that attracted Kenya Prisons, Kenya Pipeline, KCB and DCI.

"I am hoping to get a call up to the national team and this would be which is a fulfilled fantasy for me. The best attacker's award is a recognition of the hard work but I also hope it will be the beginning of better things to come."

The Bungoma county native joined KCB in December 2021 but left the bankers in April 2022 for greener pastures with the sleuths before joining Kenya Police Training College, Kiganjo. She was among the 14 DCI players to graduate from Kiganjo two weeks ago.

"The lure of employment was hard to resist. Coach Daniel Bor convinced me that DCI was the best place for me to develop. I can now fully concentrate on playing knowing that I can take care of my needs."

The Kesogon high School alumnus believes there's room for improvement even as she looks up to Mercy Moim for inspiration.

"I am still a raw talent, eager to learn and polish my game. My reception needs to be worked on while there's more work to be done in backcourt defence," the last born in a family of six added.

"Moim is a volleyball gem. She has played at the top level for many years and performed consistently both at the club and national team levels and there are no signs of her slowing down yet."

Namisi started playing volleyball in 2017 while in Form One. The Covid-19 pandemic denied the soft-spoken player the opportunity to showcase her talent in the school games. Namisi left the Trans Nzoia county-based institution in 2021.

The 6'11 inch attacker rates highly Kenya Pipeline's Pamela Adhiambo. "Despite her age, she's one of the best attackers in the country. She has pace, and power, and can only become better."

Headcoach Japheth Munala said the collective effort will be key if the bankers wish to add another trophy to their cabinet.
Sports
2 weeks ago

The team is trying to get their act together ahead of the three-day championship slated for January 20-22.
Sports
2 weeks ago
Post a comment
by EVANS OUSURU
Sports
25 January 2023 - 05:00
Read The E-Paper