•Kisumu climbed to second on the KRU Championship log with 17 points from six games played so far following the win.

•Kabarak University upset former Kenya Cup side Impala Saracens 16-12 in Nakuru to move to third place on the log with 17 points from five games. 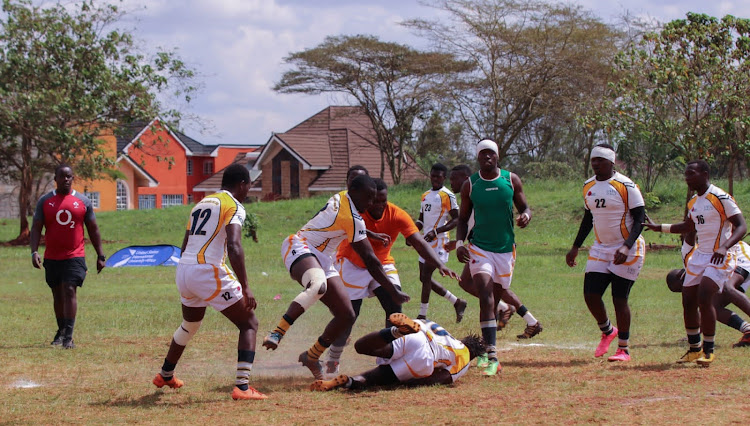 USIU-A players during a past training session
Image: HANDOUT

Kisumu RFC revived their hopes of returning to the Kenya Cup after edging bottom of the table United States International University Africa (USIU-A) 19-3.

USIU-A Martial's coach Tom Lagat said: “Individual errors cost us the game, our systems are better. We will analyse the game and plan for the encounter against the University of Eldoret’s Trojans.”

Kabarak University upset former Kenya Cup side Impala Saracens 16-12 in Nakuru to move to third place on the log with 17 points from five games.

Nondescripts maintained their unbeaten record in the league after thrashing hosts and relegation-threatened Eldoret RFC 36-0 in Eldoret. Nondescripts, who were relegated from Kenya Cup last season, lead the log with 24 points from five outings.

The University of Eldoret Trojans ended Daystar University’s fine run in the league with a hard-fought 15-12 win in Eldoret. Trojans led 15-5 at the breather. The Daystar Falcons dropped to fourth on the table while the Trojans remain 9th.

South Coast Pirates stunned former Kenya Cup side 20-17  at the Bull Ring in Kakamega. The Diani-based team remains on course for a play-off slot. The pirates are 5th on the log with 15 points from five games.