How worse can it get for Qatar?

Qatar took the unwanted credits for being the first ever host nation to lose in the World Cup opener.

• Even the FIFA President Gianni Infantino’s attempts at diffusing the tension haven’t worked much.

• The clamping down of gay rights voices, ban of alcohol sale at the stadia, agitation towards workers’ rights and generally warnings on freedom of expression have been the key highlights. 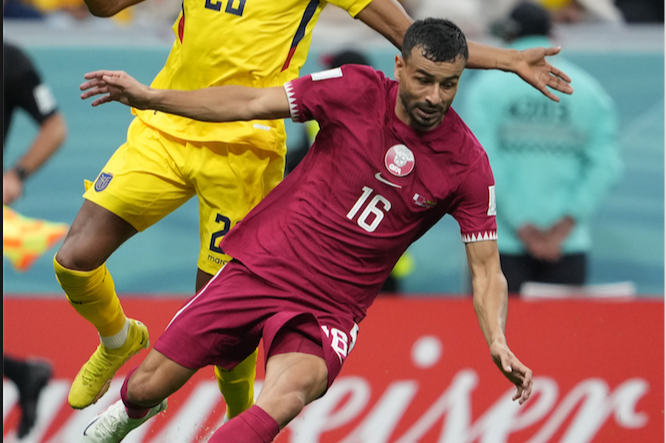 Kevin Rodriguez (L) of Ecuador vies for the ball with Boualem Khoukhi of Qatar during the Group A match at the Al Bayt Stadium in Al Khor in Qatar
Image: XINHUA

After a lot of hue and cry, the 2022 World Cup is underway in Qatar. In World Cup history, the ongoing edition will go down as one of the most expensive and also the most controversial. Even the FIFA President Gianni Infantino’s attempts at diffusing the tension haven’t worked much. The clamping down of gay rights voices, ban of alcohol sale at the stadia, agitation towards workers’ rights and generally warnings on freedom of expression have been the key highlights.

All those threatened to overshadow the world’s most prestigious competition but clearly, the beautiful game has won. We have a whole month of action ahead, with a lot of intrigues, emotions and heartbreaks. Talking of heartbreaks, the host nation has already suffered one, and a heavy one at it.

Qatar had a false start to the competition they are hosting, and on their first ever appearance at this stage, when in Group A, they suffered an opening loss, against Ecuador. A brace from veteran Enner Valencia sunk the hearts of Qatari fans and it was quite disappointing to see them leave the stadium at half time.

By that result, Qatar took the unwanted credits for being the first ever host nation to lose in the World Cup opener. It will particularly be harder for the host nation, considering they haven’t even faced the tougher teams in the group. They could join the list of the few host nations that have failed to advance past the group stages in a competition they hosted.

While there is that sad part tagged on Qatar, and especially with SportyTrader deeming them underdogs for the remaining two group games, fans can still benefit from some of the best betting deals around. For example, one of the top sites to register with is unquestionably Bet365, which offers a wide variety of markets as well as offers and many payment options, being a global company. Such offers include the Bet365 new customer offer profiled on SportyTrader, which assures a bonus of up to £50 in bet credits upon registration and betting.

Qatar are set to face African champions Senegal and European giants the Netherlands in their remaining games and this doesn’t sound so great for the optimistic fans, especially considering they struggled to make much in the way of goal attempts against Ecuador. Qatar have no goal from their opening game, and are set to face some of the teams with the meanest defences in their recent matches.

For a first-time appearance at a FIFA World Cup, it is understandable that they would struggle, but the issue that will leave a sour taste across the fan base, the world over, is the mere fact that the host nation chose to publicise more their moral standards than focus on the game.

A lot has been said about politicizing the sport, with many standing against it, but in the face of the 2022 World Cup in Qatar, their performance may create another problem after the group stage matches – fan apathy. If Qatar gets eliminated at the group stage, and with the restrictions on the fans in place, we will have a lot of fans who feel detached from the competition and the expected carnival mood at a FIFA World Cup will be missing.