The 14-member team will take part in the global show set for November 16th to December 4th.

• The athletes were drawn from various shooting clubs across the country, and were competitively selected following a rigorous 2022 IPSC league competition that ran monthly from January to October. 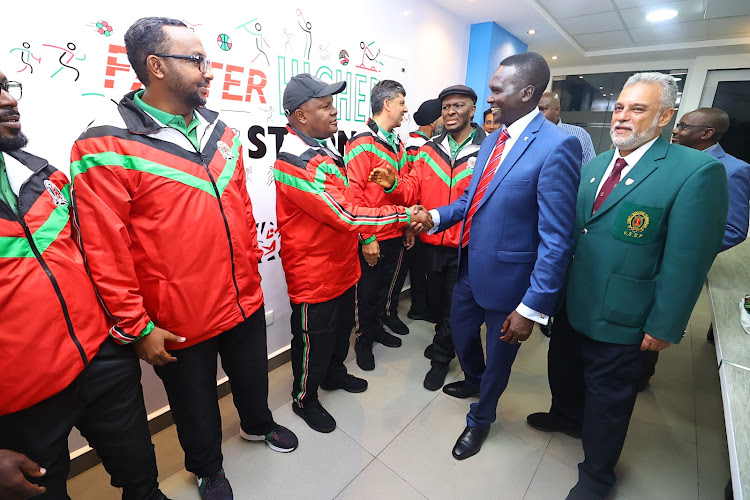 A 14-member squad will represent the country at the World Shooting  Championships scheduled for November 16 to December 4 in Pattaya, Thailand.

The marksmen were drawn from various shooting clubs across the country and were competitively selected following a rigorous 2022 IPSC league competition that ran monthly from January to October.

Speaking during the flag handover, the National Olympic Committee of Kenya (NOCK) Tergat insisted on discipline and focus as they depart.

“Carrying the flag and wearing the national colours will always be an honour to every sportsperson. That is why should always walk with your head high and your chest out. Remember world title and Olympics qualification is at stake,” he said.

“The global show provides an opportunity for Kenyans to showcase and benchmark their practical skills against the world’s top elite competitors,” he added.

The event is the pinnacle of the IPSC practical shooting discipline featuring over 3000 competitors and officials drawn from over 100 member countries, making it the largest event in the world.

Since the inception of the IPSC discipline in Kenya four years ago, the membership has grown over the last two years with most shooting clubs in the country including members of the disciplined forces.

During this period, competitors have also had the opportunity to gain exposure at various local and international competitions.

In recognition of this progress, the IPSC World governing body granted Kenya the privilege to host a regional Level 3 event earlier in the year.

Kenya to use ISSF World Cup to benchmark for Paris2024

The 12-day competition is set for South Korea from July 9th to 21st where Pricilla Wangui and Maurice Morara will represent the country.
Sports
6 months ago

KSSF president Shoaib Vaiyani described the team  as the creme-de-la-creme of fullbore shooting and backed them to deliver on their potential.
Sports
7 months ago
Post a comment
by EVANS OUSURU
Sports
09 November 2022 - 05:00
Read The E-Paper