McRae also believes he has sufficient WRC seat time to propel him to greater heights at the continental level.

• Rwanda has traditionally retained its longstanding reputation as one of the fastest and most technical rounds of the ARC circuit, with minimal rough stretches.

• Meanwhile, Kimathi's FIA Rally Star teammates have pronounced themselves ready for the Mountain Gorilla round slated for this weekend. 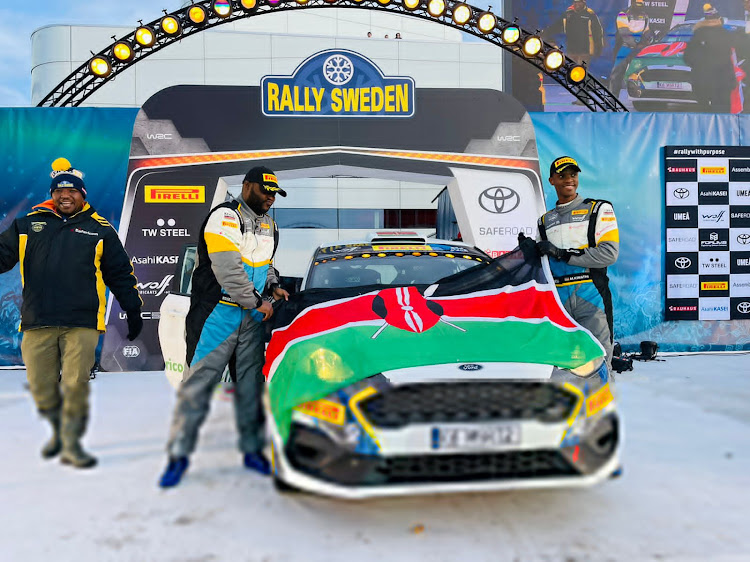 McRae Kimathi (right) and his partner Mwangi Waithaka in a past WRC event. The duo will be in action this weekend in Rwanda
Image: HANDOUT

Junior WRC star McRae Kimathi is eager to fight at the sharp end of a tough African Rally Championship (ARC) series in Rwanda this weekend.

After a rigorous reconnaissance, McRae remained optimistic he has the guts to keep ruffling feathers at the continental level.

He'll be looking for another strong finish at the prestigious Rwanda Mountain Gorilla Rally in the Eastern province of the country, where he secured his maiden career podium last year.

McRae also believes he has sufficient WRC seat time to propel him to greater heights at the continental level.

“We took our first podium in Rwanda last year, so hopefully, this year we can go one better or even achieve the unexpected. But it will be difficult with the likes of Karan Patel, Jas Mangat, local hero Ginacarlo Davite and Leroy Gomes all eying the coveted top prize,” McRae said.

He added: "WRC experience will definitely play out for me this weekend. But having had the opportunity to experience similar road conditions on WRC Estonia and Poland, we can only hope for the best.”

Rwanda has traditionally retained its longstanding reputation as one of the fastest and most technical rounds of the ARC circuit, with minimal rough stretches.

“The route is very fast and it takes a lot of commitment to emerging best.  Whoever plays his or her cards well carries the day,” Kimathi Junior quipped.

The Kenyan quartet hopes to translate a good feeling from pre-event formalities (recce, qualifying and scrutineering) into meaningful results.

The youthful outfit, comprising Maxine Wahome, Jeremiah Wahome, and Hamza Anwar head into the event with a lot of confidence.

Jeremiah Wahome, who currently leads the Junior ARC category, was all smiles saying: “It’s good to be here. I didn’t do the event last year, so it's a new experience for me, but from recce, they all look good-fast but enjoyable. For me, every rally is different but it will be flat-out from the onset.”

Maxine, a leading female driver in the continental arena, narrated her ARC experience so far. “I am super excited to be back in Rwanda. It’s been a good learning experience from Equator (Kenya), Uganda, Tanzania and now Rwanda."

"Every country has its own unique rally-sport lessons. So, let’s see what Rwanda has to offer this time round. But from recce, it looks pretty much the same route as last year.”

Maxine finished sixth in Rwanda last year in the company of  Linet Ayuko.

She went on: “The smooth roads in Rwanda are amazing but now with the rains, it should definitely be a tough outing. Last year, I tackled the event in a Subaru, so I am eager to see how far I can go with the Rally3."

" I am not a big fan of wet events, but with the kind of soil and texture in Rwanda, I want to believe that it will not be as tough as it was in Uganda.”

Sunday’s closing leg will take crews through a total competitive mileage of 70.94km through two repeated stages at Kamabuye (27.07Km) and Gayo (8.40km).

The service park will be based in Nemba. Podium celebrations and Prize giving shall take place at Kigali Convention Centre (KCC) .

The 23-year-old intends to give the Rwanda Automobile Club (RAC) organized round a good push albeit cautiously.
Sports
3 days ago

Both Karan and Zambian Leroy will tackle this weekend’s event in their state-of-the-art Ford Fiesta Rally2 machines (the former R5).
Sports
4 days ago
Post a comment
WATCH: The latest videos from the Star
by SAMSON ATEKA
Sports
24 September 2022 - 05:00
Read The E-Paper