The defensive pair of Sammy Oungo and Robert Masibo as well as midfielders Willis Okeyo and Edmond Makona are unavailable in what is a huge blow to Patrick Mugambi's side.

• Oungo is expected to be on the treatment table for at least two months after fracturing a finger against Wazalendo.

• Makona continues his recovery from a groin injury he sustained in training. 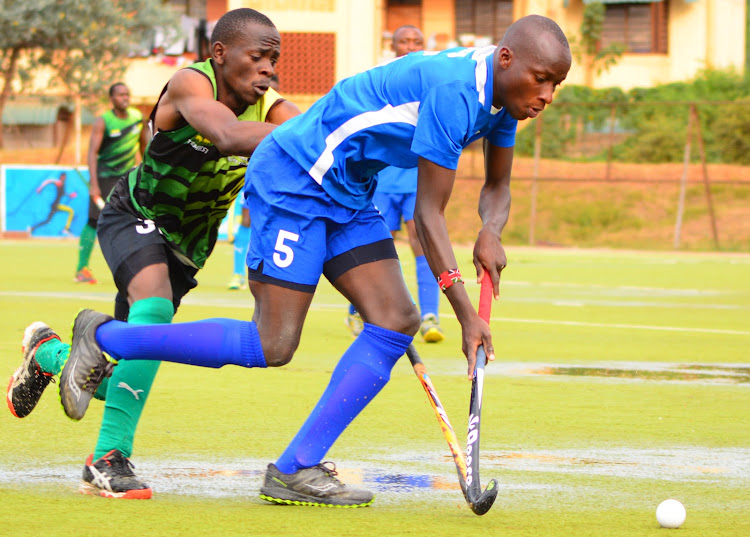 Kenya Police will miss the services of four players when they take on  Sailors on October 2 in a Kenya Hockey Union men's Premier League match at the City Park Stadium.

The defensive pair of Sammy Oungo and Robert Masibo as well as midfielders Willis Okeyo and Edmond Makona are unavailable for selection in a huge blow to Patrick Mugambi's side.

Masibo, who has been an ever-present figure, began a professional stint in Germany at the start of the month while Okeyo is expected to return to VfB Struttgart on September 21.

Oungo is expected to be on the treatment table for at least two months after fracturing a finger against Wazalendo. The former Kisumu Simba Club (now Butali) player has enjoyed a trophy-laden career with Police, whom he joined in 2008.

His 14 years have yielded five national league titles. But for a player now in the twilight of his career, Oungo continues to silence his critics.

Makona continues his recovery from a groin injury he sustained in training. After missing the clash against Wazalendo over the weekend captain Victor Wekesa confirmed he is in line to return against Sailors.

"We are in big trouble considering the number of absentees. The quartet has contributed to our success so far but we will have to try and fill the void. It is again time for the young blood to step up and be counted," Wekesa reveals.

Police's 1-1 all draw with Wazalendo allowed champions Butali Warriors to open a three-point gap at the top of the table. The defending champions outclassed struggling Greensharks 3-0.

Butali have 26 points, three better of police. Wekesa, however, doesn't expect the gap to widen any further.

"There are still eight matches to play so we have to focus on winning all of them and see what happens," said Wekesa.

"Conversion was our main undoing over the weekend after converting just one of our 13 short corners."

Okeyo back as Police target double over Wazalendo

'Awilo' returns following a fourth professional stint in Germany where he played for VfB Stuttgart.
Sports
3 weeks ago

Wolverines entertain Sliders in the bottom of the table Women's Premier League only match.
Sports
3 weeks ago
Post a comment
WATCH: The latest videos from the Star
by EVANS OUSURU
Sports
15 September 2022 - 05:00
Read The E-Paper