• It is a measure of Verstappen and Red Bull’s superiority that pretty much everyone thought he was going to win from there, even with Charles Leclerc on pole for Ferrari at their home race.

• “I don’t think strategically they made a bad call,” Red Bull team principal Christian Horner said. “We just had a quicker package and we would have won the race irrelevant of that.” 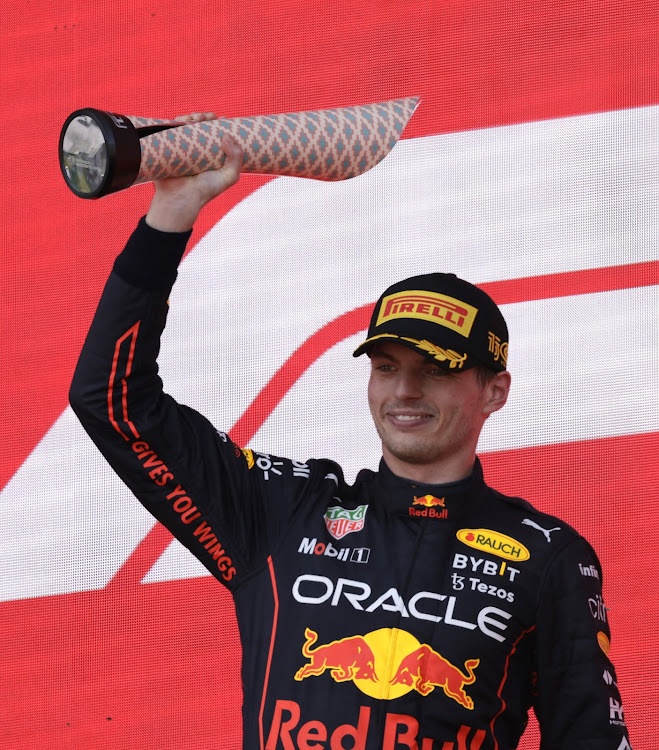 This Formula 1 season has distilled into a sort of ‘Challenge Max Verstappen’ show — pick a grid position for the Red Bull driver and see if he can win. The answer has become, invariably, yes.

In Hungary, at the beginning of August, Verstappen started 10th, and won. In Belgium, after the summer break, he was 15th on the grid, and won. At the Italian Grand Prix at Monza on Sunday, he started seventh.

It is a measure of Verstappen and Red Bull’s superiority that pretty much everyone thought he was going to win from there, even with Charles Leclerc on pole for Ferrari at their home race. Mercedes driver George Russell, starting second behind Leclerc, said: “You’d have to be pretty stupid to bet against it.”

Verstappen was up to third a matter of metres after crossing the line to start lap three, and second two laps later. As he sat there over the next few laps, edging ever closer to Leclerc, it was simply a matter of time before the Dutchman was in front.

Ferrari gambled on strategy, but the reality was it made no difference.

“I don’t think strategically they made a bad call,” Red Bull team principal Christian Horner said. “We just had a quicker package and we would have won the race irrelevant of that.”

“It’s not difficult to beat a faster car,” Binotto said. “It is impossible. He was faster. Whatever was the strategy, he would have won.” 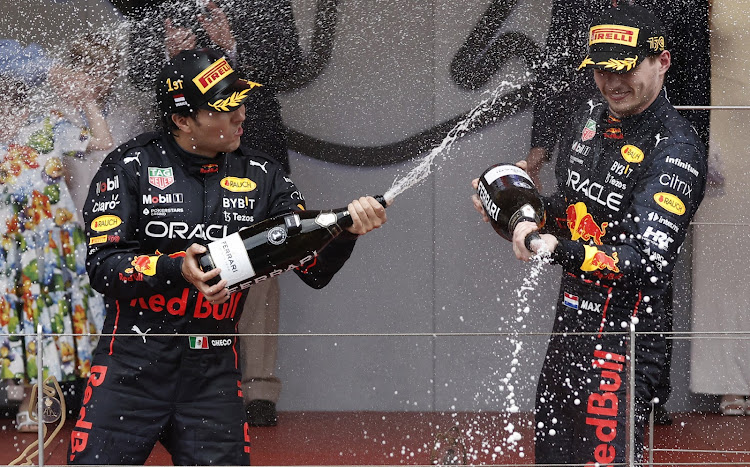 From a sliver to a chasm

It was not always this way. The season has turned around quickly. There was a period when Red Bull were engaged in a very tough battle with Ferrari.

Ferrari’s errors and mishaps have been smoothing Verstappen’s path for some time, but as recently as late July, there was little to choose between the two teams in performance.

Not anymore — and the Italian Grand Prix was a perfect demonstration of how the margin between the teams has grown in just a month or two from a sliver to a chasm. Red Bull, Horner said, compromised their qualifying performance by running more downforce, knowing they would be taking a five-place grid penalty for using too many engine parts.

That meant their usual straight-line speed advantage was reduced — at the track where it is the most important of any on the calendar in determining lap time. Still Verstappen lost pole to Leclerc by only 0.145secs after one of the Monegasque’s trademark on-the-limit, last-minute specials.

Ferrari, Red Bull believed from looking at the GPS data, were also running their engines in a higher mode than usual; they assumed in order to look better at their home race. But within a few laps of the start, it became clear that not only was Verstappen faster than Leclerc, his car was wearing its tyres less.

If Leclerc had stayed out under the early virtual safety car, Verstappen would have pitted. Ferrari went for it instead. They surrendered track position, locking themselves into a slower two-stop strategy, hoping at least to try to come back at Verstappen on grippier tyres at the end of the race.

But when Leclerc made his second stop, he was no faster than Verstappen when he emerged. And his resigned demeanour after the race told its own story. Verstappen now leads Leclerc by 116 points. If he leaves the next race in Singapore 138 ahead, the title is his. That might be too much of an ask — it would require Verstappen to win, and Leclerc not to score. But it will come soon enough, no matter what. 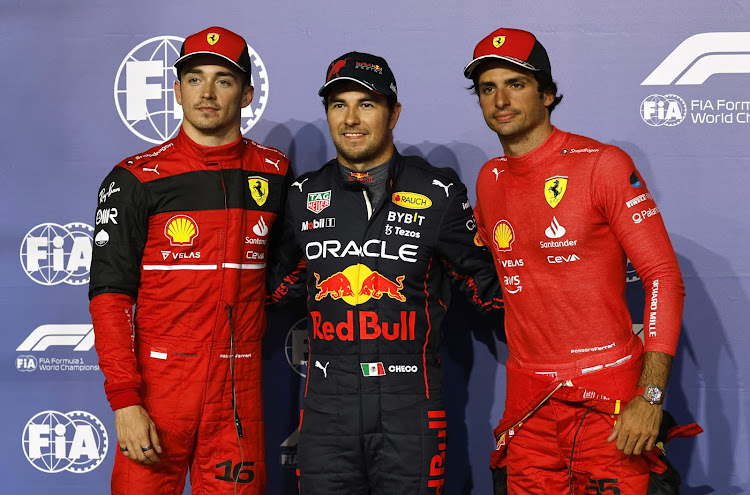 How are Red Bull so far ahead?

Monza was Verstappen’s fifth win in a row and his 11th in 16 races. He is well on course to break the record for the number of wins in a season — held, at 13, by Michael Schumacher and Sebastian Vettel — and the latter’s achievement of nine in a row set in 2013.

On average, the Red Bull is still not the fastest car this season over one lap. But it has long looked on balance to be the best race car, even if Ferrari have had their moments of domination, and plenty of missed opportunities. Now, though, the Red Bull is not just the best, it is on another planet.

According to Verstappen, the key change has been a reduction in weight. The car started the year overweight, and Verstappen found it lazy and lacking in front-end grip. He hates understeer. Slimming it down has made it come alive for him, allowed him to express all his talent.

“It’s amazing what we are experiencing within the team,” Verstappen said. “We are having an amazing year. And it’s important to enjoy it as well. I think we’ve had a lot of different challenges on different kinds of tracks and now the car really seems to work at every track. And yeah, we are extremely pleased.”

It has left Ferrari struggling for answers. Earlier this year, Leclerc and Binotto were expressing their confidence that Ferrari could keep up in the development race. After all, they said, it would be the same people developing the car as those who built Ferrari’s first competitive machine since 2018. But they were wrong.

“They have been capable of developing the car for a better balance and better tyre degradation that we didn’t. We are looking at the reasons because we need to address it - if not for this season then for the next one.” 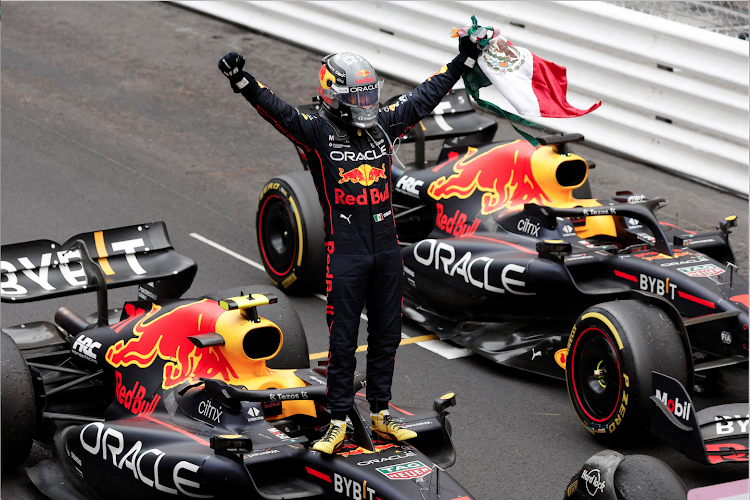 Criticism of the FIA safety-car finish

The race ended in controversial fashion as one of the season’s recurring themes popped up again — the competence of the FIA. Monza was not a good weekend for F1’s governing body. There was mystification after qualifying when it took nearly four hours for officials to publish the provisional grid order.

Normally, this does not matter, but this weekend it very much did. Verstappen was one of nine drivers who had grid penalties, including Lewis Hamilton and Ferrari’s Carlos Sainz, and not unreasonably people wanted to know where they would be starting. Even the teams disagreed — some felt Verstappen would be fourth (wrong); others seventh (right).

“The regulations need to clarify how we count in that regard,” Binotto said. “The reason it took so long is there are certainly different interpretations and the regulations are not clear enough. That is something we need to address for the future.”

The FIA’s argument was that publishing the grid had to wait until after scrutineering. Yet on Sundays the provisional race result is published straight away. Then, on Sunday, there was a controversy over the race ending under a safety car.

This was not a drama on the scale of that which decided the title in Verstappen’s favour last year, but still clearly mistakes had been made. And the crowd made their feelings known, booing under the podium, even if some of that was also almost certainly for Verstappen, beating a Ferrari.

“This is what it is,” he said. “It’s not going to spoil my day. I’m just enjoying the moment.”

The safety car picked up the wrong car — Russell, not Verstappen — and that delayed the process. Even when Russell went past, taking most of the rest of the field with him, the wrong lights were being shown on the car. And although it had been deployed only to recover the broken down McLaren of Daniel Ricciardo, not a crash, and there were still six laps to go, officials ran out of time to restart the race.

An FIA spokesperson said Ricciardo’s car had been stuck in gear, delaying its removal. “As the safety of the recovery operation is our only priority,” a statement said, “and the incident was not significant enough to require a red flag, the race ended under the safety car following the procedures agreed between the FIA and all competitors.”

Mercedes team principal Toto Wolff was sanguine about it, pointing out that the problem in Abu Dhabi was that the rules were not followed, which was not the case on Sunday.

“Whether I am Abu Dhabi-traumatised or not, the rules were followed to the dot today,” Wolff said. “There were marshals on the track, a crane out there, that’s why they didn’t let anybody overtake, and then there was not enough time to let everybody overtake.

“If one is not happy with the regulations and you want to have a big-bang show and two laps of racing then mayhem, I am up for it. But then you need to change the regulations. So I don’t think we should complain about anything that happened because this is the rules.”

Horner and Binotto, though, disagreed. Horner said he was “disappointed”. It was a “relatively trivial incident”, he said.

“The principles of what we have always discussed is no-one wants to see a race finish under a safety car like that,” Horner said, “and it felt like there was enough time to get the race going.

“Despite there being a risk with it all being bunched back up, we would have preferred to win the race under racing conditions. And you could hear the displeasure of the crowd, because it just felt like everybody had been robbed of that finish.” 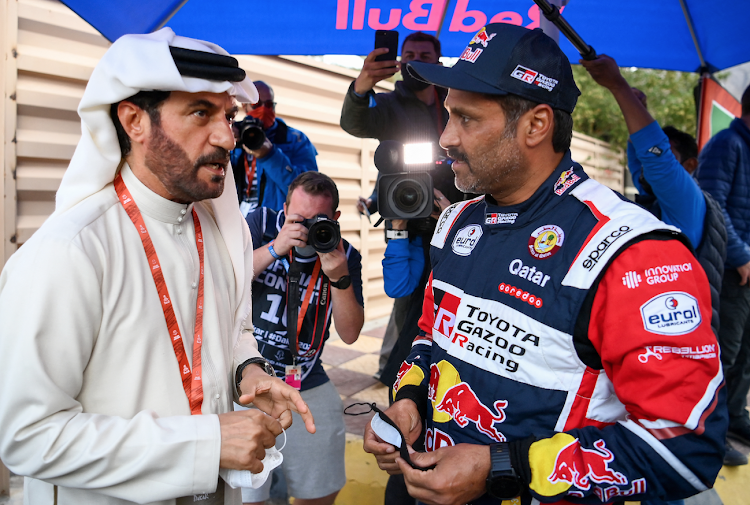 President of the International Automobile Federation (FIA) Mohammed ben Sulayem (R) greets Toyota's driver Nasser Al-Attiyah of Qatar at the end of the Stage 1A of the Dakar 2022 rally
Image: FILE

Binotto was even more outspoken.

“We don’t understand why it took so long for them to decide,” he said. “They didn’t do a good job today and they simply need to do a better job in the future because it is not good for F1.”

FIA president Mohammed Ben Sulayem has been making his presence felt this year - in matters such as the row over driver jewellery and underwear earlier in the season, a delay in publishing the engine regulations, and his handling of the row over cars ‘bouncing’.

Disenchantment at the way the FIA is running F1 has been bubbling away among the teams for much of the season, and is growing. Ben Sulayem has called a meeting on Monday to discuss “a range of sporting matters” with the team’s sporting directors. “It follows,” a statement said, “a round of separate meetings held in Monza between the FIA president and a number of Formula 1 drivers.

“It is the first meeting of this type since 2013 and is part of the president’s ongoing mission to improve the standards of the sport, bringing together drivers, teams, stewards, officials in a collaborative way.”

Horner said he was “sure” the handling of the end of the Italian Grand Prix “will now be near the top of the agenda”.

Hamilton taken to ‘breaking point’ as win slips away at Zandvoort

Hamilton was in with a shout of pole, before Verstappen’s team-mate Sergio Perez spun at the end of qualifying and prevented both Mercedes drivers ...
Sports
3 weeks ago

Domenicali said it was “crucial to give the maximum possibility for women to come to F1 — we are totally dedicated to that”.
Sports
1 month ago

Max Verstappen took his eighth win in 13 races this year with a consummate drive from 10th on the grid.
Sports
2 months ago
Post a comment
WATCH: The latest videos from the Star
by Andrew Benson/ BBC
Sports
13 September 2022 - 00:00
Read The E-Paper