Mashujaa back to basics after unconvincing first leg in KHU league

Butali have 23 points—one ahead of the Police, who are on 22.

•Following the weekend results, defending champions Butali Warriors maintained their one-point lead at the top of the log against second-placed Kenya Police.

•Third-placed Strathmore Gladiators are nine points behind Kenya Police although they have a game in hand. 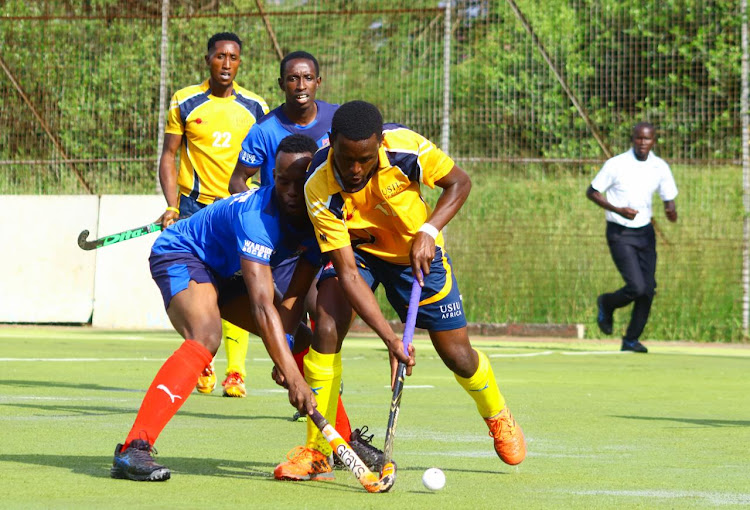 United States International University Mashujaa have earmarked areas of improvement ahead of the second leg of the Kenya Hockey Union men's League.

Captain Jamleck Macharia said Mashujaa are back to the drawing board after losing 1-0 to Greensharks in the league match on Sunday— their fourth loss in 10 matches.

The defeat left the students seventh on the log in the 10-team league with 11 points. He said their priority at the moment is to adjust the playing system and rebuild the team.

"It is better to go back to basics because we have made a lot of errors in the 10 matches we have played," Macharia stated.

He added: "The system of play needs to be adjusted and maintained. Transition is another challenge while execution from defense, midfield, and attack are still shaky. There's the need to play a possession-based game that requires one to built from the back."

Following the weekend results, defending champions Butali Warriors maintained their one-point lead at the top of the log against second-placed Kenya Police.

Both sides overpowered their opponents on Sunday with a peerless Butali putting six past Wazalendo in their 6-2 win. The law enforcers squeezed a 3-2 hard-fought victory against hard-to-break Sailors.

Butali have 23 points—one ahead of the Police, who are on 22. The two teams have been in imperious form in the first leg, turning the league title into a two-horse race.

Third-placed Strathmore Gladiators are nine points behind Kenya Police although they have a game in hand.

Wazalendo remain fourth also on 13 points but with an inferior goal difference having scored 13 goals and shipped in 15—10 of which have been conceded in the last two matches.

We must take our chances against Mashujaa, says Sharks’ Osiche

Osiche said lack of cutting edge in the final third has cost the team points as Greensharks occupy eighth place in the 10-team league.
Sports
5 months ago

The women's top-tier league took a break as the national team continued with Commonwealth Games preparations.
Sports
5 months ago

The varsity side failed to garner maximum points in five previous attempts, managing just one point.
Sports
5 months ago
Post a comment
by EVANS OUSURU
Sports
28 June 2022 - 05:00
Read The E-Paper