How Queens' Awour redeemed herself after first career red card

• I felt hurt after the red card because I knew I had cost the team-Awuor.

• Surprisingly, the lanky goalkeeper was partly to blame for Queens failure to defend their title last season. 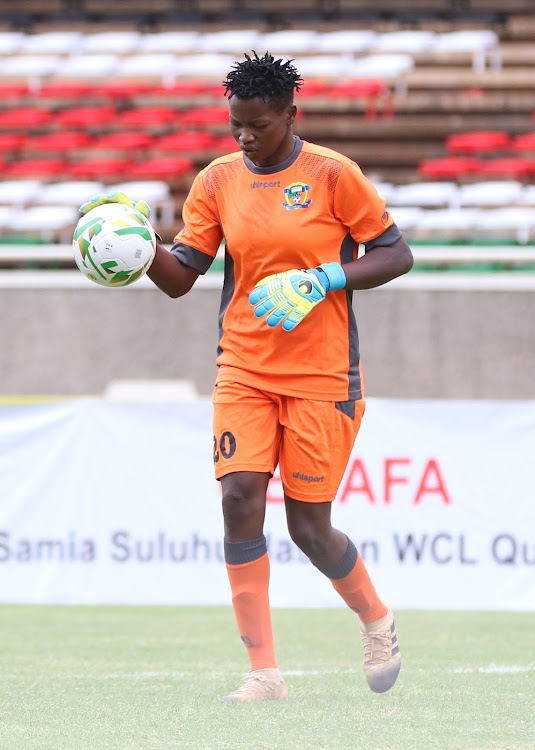 Vihiga Queens goalkeeper Lilian Awour is one of the few decorated women footballers to have won record trophies even before reaching their prime.

The shot-stopper 23 has three Kenya Women's Premier League titles to her name while her success in the CAF Champions League Cecafa qualifiers helped Kenya qualify for the inaugural continental event in Egypt in November.

The Nyakach Girls alumnus thrives on discipline and has not even been yellow carded since she made the position her own at Vihiga four years ago.

Surprisingly, the lanky goalkeeper was partly to blame for Queens failure to defend their title last season. She was shown a red card after handling the ball outside her area in a semi-final match game against Gaspo.

The Gatundu-based side made their numerical advantage count by winning the match on post match penalties (5-4), only to be slayed in the final 3-0 by Thika. Awuor says the red card remains her lowest moment in football.

"I felt hurt after the red card because I knew I had cost the team. It was even tougher to see Vihiga bowing out and I couldn't imagine how I would get over it," says the keeper, who was part of the Starlets squad to the 2016 Cecafa Championships in Uganda.

"Throughout my career, I have never been shown a yellow card and the sending off brought me to my knees. We desperately wanted to defend the title and it was unimaginable to see our rivals Thika dethrone us."

She continued: "I have won the title as a student with the tough task of balancing sports and academics and I really wanted this one more because football was my only focus but it all came to a terrible ending." 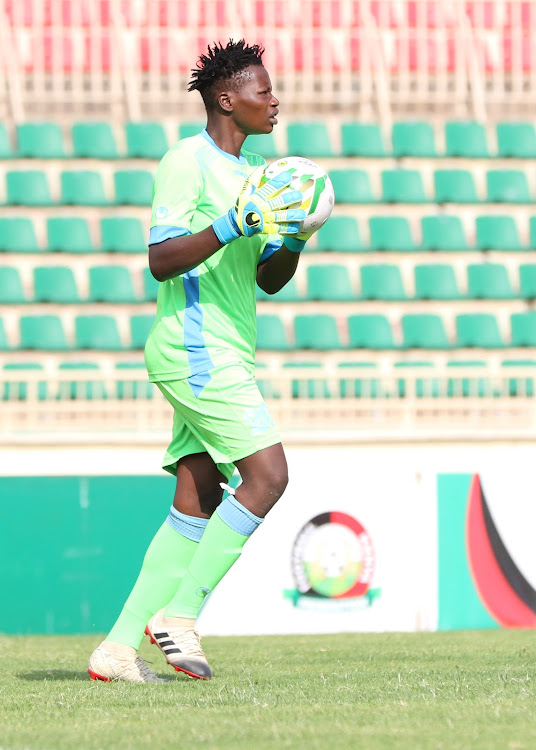 Awour chose to close the door on that part of her past but is focused on using it as a stepping stone to greater achievement.

She knew the only way to redeem herself was to fight her heart out in the Champions League qualifiers, her biggest test to date at club level.

"If there was a route to bounce back strongly and regain my confidence, it was to be a class act in the qualifiers," she says.

Queens got a reality check on their preparedness in the inaugural competition-losing 4-2 to Commercial Bank of Ethiopia CBE in the opening match with Awuor's error-strewn performance gifting the bankers two goals. Neither the playing unit nor the technical bench blamed Awour but inside her, she was critical of herself.

"I knew it was one of those bad days in office. I internally questioned my decision-making and felt I needed to do more. There's no finger-pointing at Vihiga but I couldn't allow the guilt to consume me. Collectively, we needed to fight for the badge," she adds. 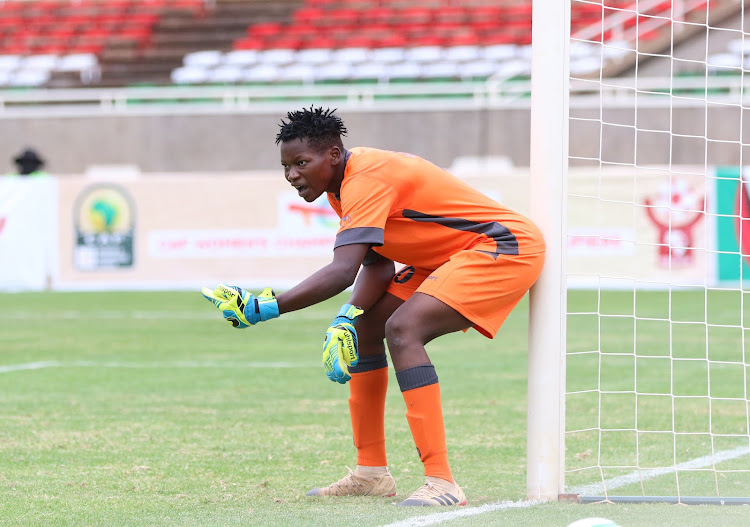 Awour was in her best element as Vihiga swept aside Zanzibar's New Generation and Yei Joint Stars from South Sudan to move into semis.

In the last four, against Simba Queens of Tanzania, Awuor was key with some crucial saves to shut out the opponents. However, the match seemingly heading for extra time, was turned on its head by Jentrix Shikangwa's stoppage-time goal.

Coming up against  Loza Geinore — CBE's captain and the tournament's top scorer with 13 goals in the final was always going to be a Herculean task.

Geinore, 24,  had tormented all the teams including Vihiga, where her in-swinging shot wrapped up the 4-2 group stage win.

However, the fleet-footed attacking midfielder fired blanks despite getting into one-on-one situation with Awuor on two occasions. Geinore's ineffectiveness was a blessing for Vihiga as Shikangwa proved again to be the player for big occasions, burying an injury-time penalty to send the handful of fans at Moi Stadium, Kasarani into a crescendo.

After the final whistle, Awour was on her knees — tears of joy all over her face. She couldn't believe it.

"I had a point to prove that failure is not the falling down but the staying down. I knew of my qualities and I was confident that I could turn my poor form around. I was determined to write off the wrongs and I am grateful I delivered when it mattered most. Even in rough moments, I remained levelheaded," she presumed.

"I had to rectify my flaws. My decision-making drastically improved with each passing game and my confidence moved a notch higher. I am lucky to have won the national title thrice but victory in the qualifiers perhaps remains the highlight of my career up to this point." 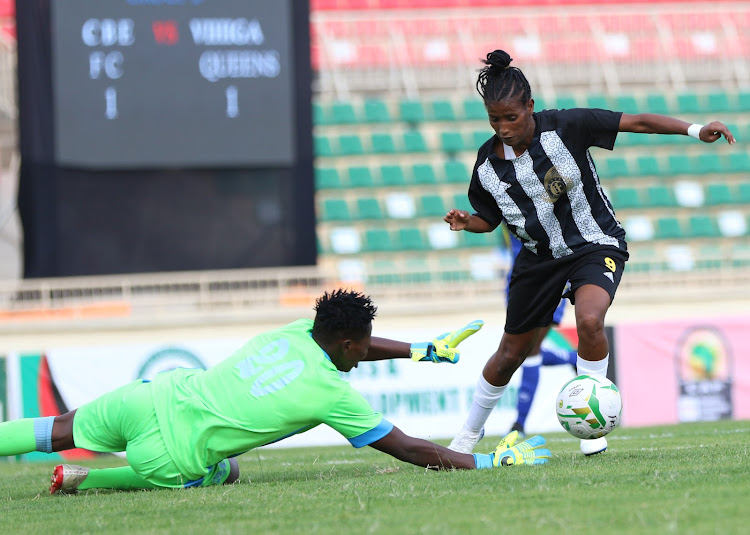 With the chance to play in the Champions League in November, Awuor believes no barriers are hard to overcome. Her eyes firmly trained on playing professional football.

"It will be a dream come true to play in the Champions League. I have burnt the midnight oil to get to the level  I am but there's still room for improvement. I would love to play abroad in the near future," she observes.

The second-born in a family of four played for the under-20 national team in matches against Egypt, Ghana, Ethiopia and Botswana in the World Cup qualifiers 2018.

She won the primary school games national competition in 2014 while in class eight. She says football was her first love even though she had a soft spot for handball while in at high school. 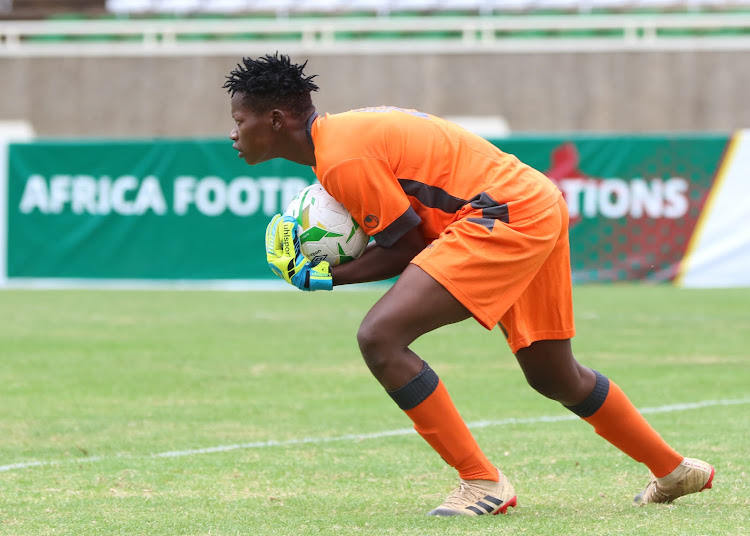 Vihiga Queens' Lilian Awuor makes a save during the match against CBE at Nyayo
Image: ERICK BARASA

Awour describes her relationship with fellow goalkeeper Winfrida Seda as cordial — a mentor who has pushed her to her limits.

"She's relaxed, a good communicator with impressive ball-handling skills. Coincidentally, we both won national titles at the same primary though in different years and lucky enough we fight for a position at the same club," she reveals.

"There's no rivalry between us. We are players who always rise to the occasion when called upon. She's experienced and I always look up to her for advice."

Awour will hope to guide Vihiga to the FKF Women's Cup final to add another feather on her cap. Queens demolished Kayole Starlets 3-0 in the semifinal on Thursday to book a date with Ulinzi Starlets.