Though transition takes time, national head coach Paul Bitok believes the juniors will benefit immensely from the guidance from senior players in the team.

• After the Olympics competition, it's now time we start the journey of building a new generation of young players-Bitok 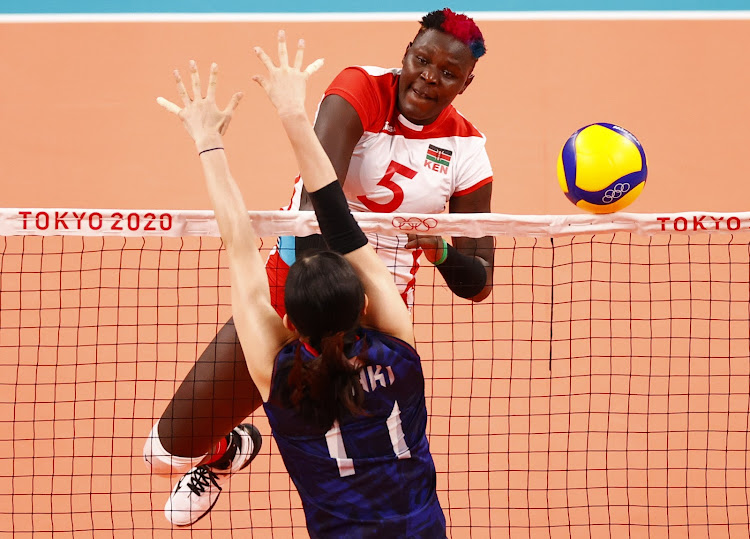 Sharon Kiprono of Kenya in action with Erika Araki of Japan.
Image: REUTERS

Malkia Strikers coach Paul Bitok has named three youngsters in his squad for the African Nations Championship in Rwanda as Kenya embark on a rebuilding mission.

Bitok insists that roping new talent into the team has always been a top priority as he seeks to build a competitive team for the 2024 Olympics in Paris, France after an underwhelming performance at the Tokyo Olympics.

"After the Olympics competition, it's now time we start the journey of building a new generation of young players. Mutinda, Adhiambo and Sinaida have justified to us in training on why they deserve a chance," Bitok said.

Though transition takes time, the gaffer believes the juniors will benefit immensely from the guidance from senior players in the team.

"It might  be a tough transitioning period for us  but with consistent training and determination, Kenya will always remain to be a champion.  The experienced players have the obligation to welcome the new players and making them feel at home."

Bitok, the former Rwanda national team coach, wants players at individual level to work extra harder and build their own brands. "I want to encourage each individual to give their best by building their own names and becoming stars. This calls for hard work and discipline."

Among those dropped are KCB captain Noel Murambi and long-serving setter Jane Wacu. The duo were part of the Olympics team.

Japheth Munala returns to the technical bench after missing out on Olympics while David Kilundo replaces Alfred Chedotum as the team manager.